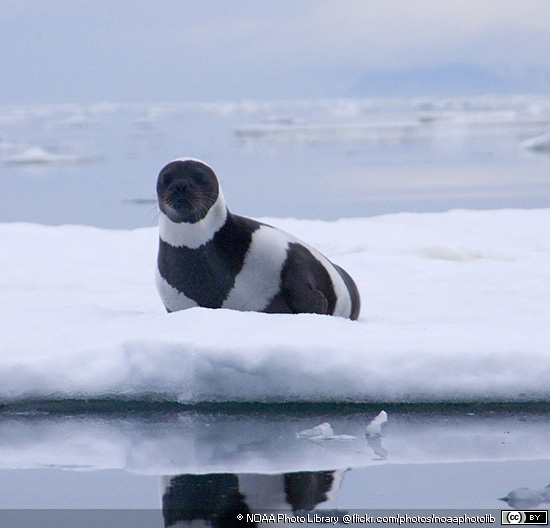 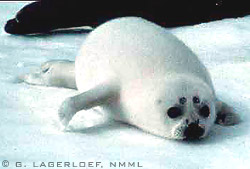 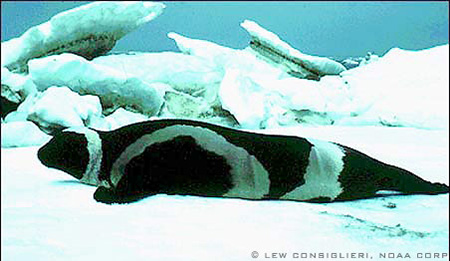 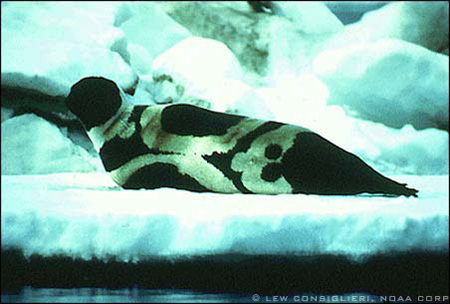 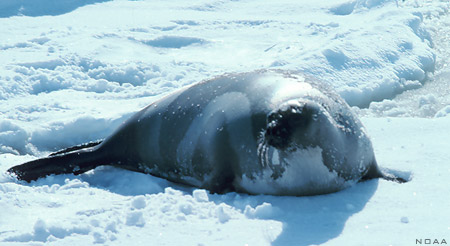 Ribbon seals, Histriophoca fasciata (Zimmermann, 1783), aka Phoca fasciata, are an elusive seal species for researchers because of their remote habitat. These seals measure an average of 1.6 m (maximum 1.9 m) in length, and weigh an average 70-80 kg (maximum 148 kg), both males and females. The Latin name for the ribbon seal means “seal with bands” because of their distinctive strips or ribbon patterns on their bodies. There are usually 4 white, sometimes yellow-tinted, 10-12 cm wide strips or ribbons around their necks, posterior (rears), and foreflippers. The solid colored parts of their fur are brown-black. Coloring of the females is lighter and their ribbons are not as distinct. Juvenile are gray with lighter colored ribbons or bands that become more distinct with age. Individual ribbon seals can live up to 20-25 years of age.

Ribbon seals, Histriophoca fasciata, can be found in the north Pacific and the Bering and Okhotsk Seas, and seasonally in the Chukchi Sea, western Beaufort Sea and the northern Sea of Japan. A sighting of a solitary wandering ribbon seal was reported in California. No data is available on the total population of ribbon seals. The most recent estimate was reported in the 1970s of about 240,000, and a more recent estimate for the Bering Sea population is about 100,000. Since ribbon seals have not been hunted commercially for several decades, it is thought that their populations have returned to their pre-exploitation levels.
https://www.youtube.com/watch?v=Wvr4OT_5qfk

Ribbon seals usually haulout on pack ice far offshore. Little is known about the migratory patterns of this species, however in winter and spring concentrations are seen on the ice front of the Bering and Okhotsk Seas. Some seals have been observed moving further north between May-July in the Chukchi and Beaufort Seas. It is thought that most ribbon seals remain in pelagic waters near the edge of the continental shelf in the summer and autumn.

Ribbon seals, Histriophoca fasciata, feed on a variety of different prey, however in areas where walleye pollock is abundant, this appears to be their primary prey. Shrimp are also an important food source, and they are also known to eat: other fish, squid, capelin, cod, eelpout, herring, halibut, and various crustaceans including crabs. Young ribbon seals tend to feed on crustaceans. Ribbon seals may dive to depths of up to 200 m in search of food.

Ribbon seal, Histriophoca fasciata, pups weigh about 9-10 kg and measure 80-90 cm at birth. Natural mortality during the first year of life has been calculated at 44%. Females reach sexual maturity at 2-5 years, males at 3-6 years. Pupping and mating take place on the ice in the spring. Pups are born in April and May with a fluffy white coat which is replaced 3-6 weeks later by a blue-gray coat that is silver-gray on the front. Pups are weaned after a 3-4 week nursing period during which the mother occasionally feeds. Mating takes place from late April to early May but no details are known of the species’ mating strategy. Adults molt in May to July, juveniles usually earlier.

Ribbon seals, Histriophoca fasciata, like other Arctic seals, are at-risk of climate change due to global warming, which may impact the distribution of polar ice. Although little is known about this species, it is thought that, like other seals, they may be affected by commercial fishing and disturbance from oil and gas exploration as well.

Because of their pelagic habitat, fewer than 100 ribbon seals are taken by subsistence hunters in Alaska each year. Between 1950-1980, these seals were hunted in Russia for their pelts, oil, and meat in the Okhotsk and Bering Seas, however they are no longer hunted commercially. There is a small bycatch of ribbon seals in north Pacific trawl fisheries.