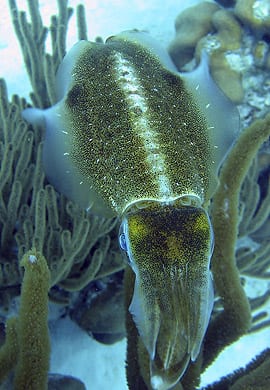 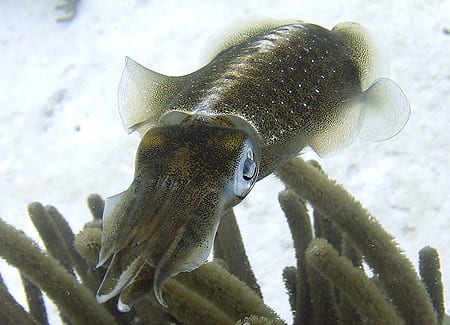 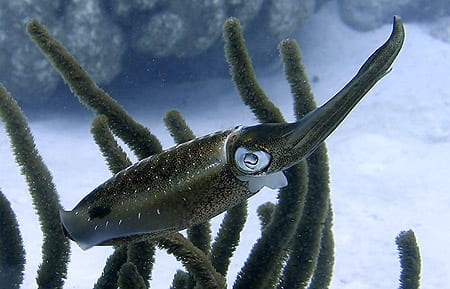 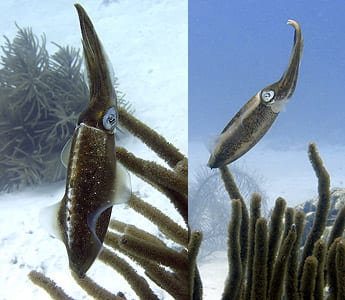 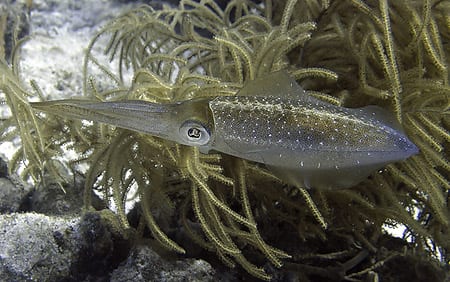 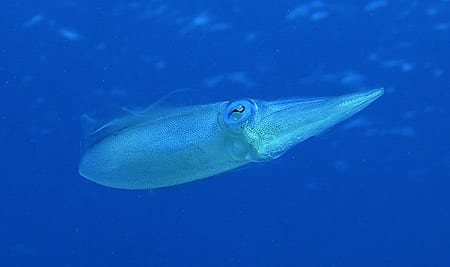 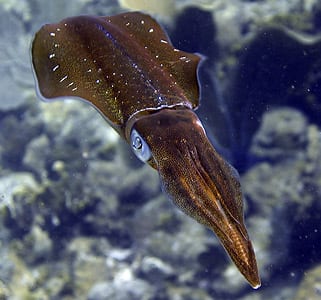 Squid are abundant in all oceans of the world. Approximately 40 species are known to live along the west coast of North America alone. A few live in shallow water close to shore, but most live in the open ocean far from land, often at great depths.

Squid are mollusks: they are closely related to cuttlefish and octopuses and more distantly to snails, clams, oysters, and sea slugs.

Reef squid, Sepioteuthis sepioidea (Blainville, 1823), aka Caribbean reef squid, are members of the 10 arm cephalopods (decabrachia) with torpedo-shaped bodies (with the hood-like part above their heads called their mantle which contains their stomach, gills, ink sac, pen, reproductive organs, and digestive organs), two large complex eyes, 8 short arms near their mouths and 2 longer tentacles, tucked inside, armed with suckers to capture prey. Their fins extend nearly the entire length of their body and undulate rapidly as they swim. All 10 appendages of the squid are “fixed to its head”, and are arranged in a circle around their mouths.

Caribbean reef squid are one our favorite cephalopods. They are often encountered among shallow reefs and are usually unafraid of divers, if not curious about them. The mantles of newly hatched reef squid are about 8-9 mm in length and the mantles in adult males and females reach 12-20 cm in length. Adult reef squid closely resemble their cousins, cuttlefishes, in that their bodies are broad and less streamlined than many other squids. Reef squid can also move about using jet propulsion by shooting water from their pallial cavity (an area inside their mantle) through their funnel to move rapidly through the water. 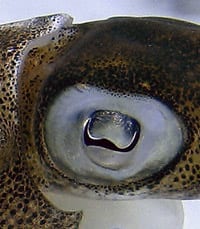 The basic coloring of a Caribbean reef squid is a mottled medium green to brown on their dorsal (upper) side with lighter coloring on their ventral (under) side for camouflage from predators swimming above or below them. These animals are social creatures often found in small groups that communicate through a variety of complex signals. Both cuttlefish and squid communicate by controlling the pigment in their skin. Messages such as readiness to mate, sexual identification, and alarm are flashed through various colorful spots, blotches, and background color. To signal slight alarm, their brow ridges turn bright gold and their central arms turn white. Their entire body will pale when a squid retreats from a potential predator and in open water when faced with an extremely aggressive predator, reef squid can also hide themselves and confuse predators by ejecting a cloud of black ink. Retreating squid near the protection of the reef will often turn dark brown or reddish in color to match their surroundings.

In addition to their colorful signaling behavior, S. sepioidea display unique behaviors such as pointing their bodies upward or vertically prior to striking a fish or prey, curling upward during territorial disputes and in hostile situations, and pointing head-down when approached by a predator in open water. The main adult squid predators include the yellowfin grouper as well as other large predatory fishes.

Compared to the size of their body, squid’s eyes are strikingly large. They have the largest eye-to-body ratio in the entire animal kingdom.

Caribbean reef squid are found throughout the Caribbean sea, as well as off the coast of Florida, commonly in small schools (4-30) in the shallows associated with reefs. The habitat of reef squid changes according to the squid’s life stage and size. Hatchlings tend to reside close to the shore in areas from 0.2-1 m below the surface on or under vegetation. Young squid typically congregate in shallow turtle grasses near islands and stay several centimetres to two meters from the surface to avoid bird predators. Adult reef squid venture out into open water and can be found in depths of up to 100 m. When mating, adults are typically found near coral reefs at depths of 1.5-8 m.
https://www.youtube.com/watch?v=0wtLrlIKvJE

Squid are voracious predators typically consuming 30-60% of their body weight daily. Prey is caught using the club-like end of their two long tentacles. Like other cephalopods, they have strong beaks used to cut their prey into parts so that their raspy tongue, or radula, can be used to further process their food. They consume small fish, other mollusks and crustaceans.

The mating rituals of S. sepioidea are often ambiguous and complex. Like other cephalopods, Caribbean reef squid, are semelparous; that is, they die after reproducing. Females lay their eggs and then die immediately afterward. The males, however, can fertilize many females in a short period of time before they die. Females lay the eggs in well-protected areas around their reefs. After competing with 2-5 other males, the largest male has been observed to approach the female of interest and gently stroke her with his tentacles. At first she may indicate her alarm by flashing a distinct pattern, but the male soon calms her by blowing water at her and jetting gently away. He returns repeatedly until the female accepts him, however the pair may continue this dance or courting for up to an hour. The male then attaches a sticky packet of sperm to the female’s body. 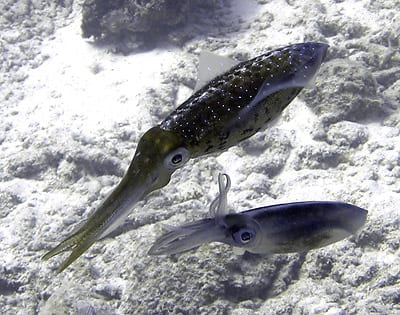 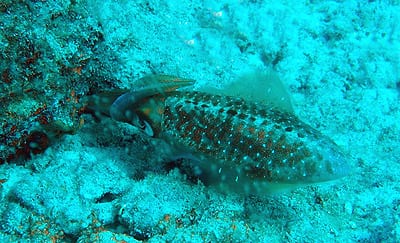 As he reaches out with the sperm packet, he displays a pulsating pattern. The female places the packet in her seminal receptacle, finds appropriate places to lay her eggs in small clusters, and then dies having completed her role in evolution.

Scientists are studying cephalopods’ large brains, elaborate sense organs, and complex behavior in order to understand more about learning and behavior patterns in all species. S. sepioidea is among the species being studied.

Before my eyes was a horrible monster, worthy to figure in the legends of the marvelous. It was an immense cuttle-fish, being eight yards long. It swam cross-ways in the direction of the Nautilus with great speed, watching us with its enormous staring green eyes. Its eight arms, or rather feet, fixed to its head, that have given the name of cephalopod to these animals, were twice as long as its body, and were twisted like the furies’ hair…. The monster’s mouth, a horned beak like a parrot’s, opened and shut vertically…. What a freak of nature, a bird’s beak on a mollusk! Its spindle-like body formed a fleshy mass that might weigh 4,000 to 5,000 lbs.; the varying color changing with great rapidity, according to the irritation of the animal, passed successively from livid gray to reddish brown. – Jules Verne, Twenty Thousand Leagues Under the Sea (1870)