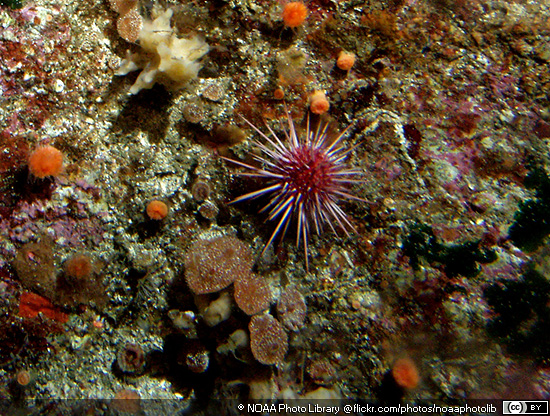 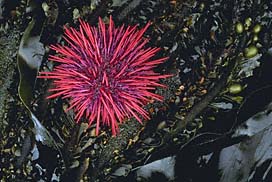 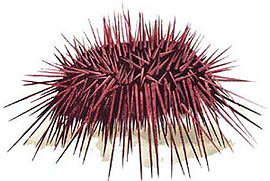 Red sea urchins, Strongylocentrotus franciscanus (A. Agassiz, 1863), aka giant red sea urchins, are colorful creatures, varying between a uniform red and dark burgundy, that crawl slowly over the sea bottom using their spines as stilts. Sea urchins belong to the marine invertebrate group called echinoderms or “spiny-skinned” animals. They are close relatives of sea cucumbers. The red sea urchin is the largest of the sea urchins, with a maximum “test”, or outer skeleton, diameter of more than 18 cm and a maximum spine length of 8 cm. Their test is made up of 10 fused plates that encircle the sea urchin like the slices of an orange. Every other section has holes through which the sea urchin can extend its tubed feet. These feet are controlled by a water vascular system. By changing the amount of water inside, the animal can extend or contract the feet. Sea stars move around the same way.

Found in the North Pacific Ocean from Alaska to Baja California, they occur on most rocky subtidal habitats from just below the low tide line to perhaps 90 m. Their preferred habitat is rocky ground with quantities of their food source of seaweeds and kelp. They avoid rocky areas exposed to extreme wave action and areas with sediments such as sand, mud and gravel.

Red sea urchins graze on attached or drift seaweed and kelp using their mouths which are located on the ventral (under) surface of the animal. They have specialized jaws consisting of 5 teeth used to devour plant material. They use their tube feet to hold on to the bottom while feeding, but they can move rather quickly using their feet, spines, or even their teeth.

Sea urchins are often found in aggregations whose combined feeding activities can remove all large plant material in an area.

Sea urchins are readily eaten by some fish (e.g., wolf eels), sea stars and crabs, although large adults appear to be less susceptible to predation by virtue of their size and have few predators. Sea otters, however, will eat even the largest sea urchins cracking them open on rocks.

The spawning of red sea urchins peaks between June and September in southern British Columbia. The fertilized eggs develop into planktonic larvae before settling on the bottom where they change into tiny juvenile sea urchins. This replenishment of the population, or “recruitment”, appears to occur annually in local waters. New recruits must hide from potential predators and many seek shelter under the spines of adult sea urchins which have a test diameter of 9.5 cm or larger. Young sea urchins emerge from shelter when approximately 4 cm in diameter and forage freely over the rocky sea bottom. Adulthood is attained at approximately 5 cm diameter and legal size of 10 cm is reached in 4-5 years. Their life span is reported to be over 100 years.

You could call sea urchins the porcupines of the sea. Like a porcupine’s quills, sea urchins depend on their long spines to deter predators. In fact, the sea urchin gets its name from an Old English word for the spiny hedgehog, a land animal similar to the porcupine. Most sea urchins can be carefully handled by humans without harm, however the poisonous spines of the long-spined sea urchins found in south Florida and elsewhere can penetrate human skin and break off causing infection and, in some cases, the need for surgical removal of spine fragments. Harmless varieties like the purple and green sea urchins are more common in cooler waters.