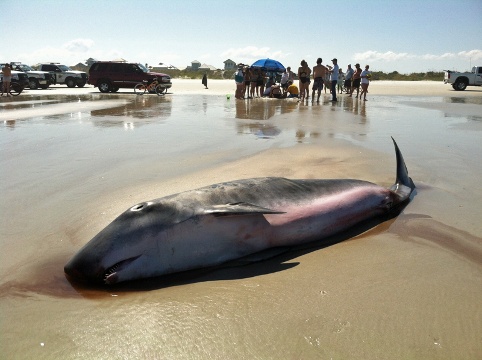 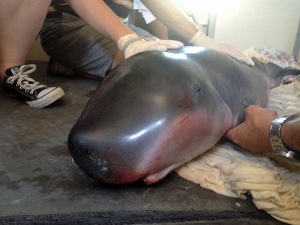 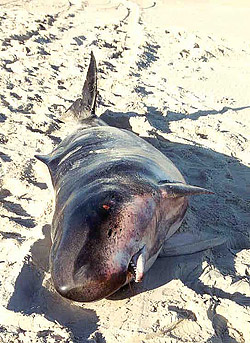 These whales have 12-16 sharp, curved pairs of teeth in their lower jaws. Their teeth fit into pockets in their upper jaw (like its “big brother” the sperm whale, Physeter catodon). Pygmy sperm whales have a mark on either side of their heads known as a “false gill” because of its resemblance to the gill slits of fish (which it shares with the closely-related dwarf sperm whales). They also have markings in front of their eyes. These whales expel water forward and horizontally instead of up vertically. Pygmy sperm whales are blue-gray to black on their dorsal (upper) side, with lighter coloring on their ventral (under) side. Their large, rounded flippers are located on the flanks behind and below the “false gill.” A very small, curved dorsal fin is located behind their midsection. Their flukes (tails) are almost dolphin-like with a deep notch in the center.

Pygmy sperm whales are found either singly or in small groups of 3-5. They are infrequently seen in the wild as they avoid marine traffic. Strandings are found on coasts in the southeastern United States, some are found alive either as single individuals or cows with their calves. Attempts to rescue stranded pygmy sperm whales have been unsuccessful.


Pygmy sperm whales, Kogia breviceps, may be found in all temperate, sub-tropical, and tropical waters. They are not known to migrate.

Male pygmy sperm whales, Kogia breviceps, sexually mature at 2.7-3 m, females at 2.6-2.7 m. There is some evidence that these whales reproduce annually with calving taking place between spring and autumn following an 11 month gestation period. Calves measure about 1.2 m at birth and weigh about 55 kg.

Very little is known about this species and it is considered very rare (and therefore potentially vulnerable to low-level threats). Population figures are unknown, they are classified as Data Deficient (DD) by the IUCN Red List:

DATA DEFICIENT (DD)
A taxon is Data Deficient when there is inadequate information to make a direct, or indirect, assessment of its risk of extinction based on its distribution and/or population status. A taxon in this category may be well studied, and its biology well known, but appropriate data on abundance and/or distribution are lacking. Data Deficient is therefore not a category of threat. Listing of taxa in this category indicates that more information is required and acknowledges the possibility that future research will show that threatened classification is appropriate. It is important to make positive use of whatever data are available. In many cases great care should be exercised in choosing between DD and a threatened status. If the range of a taxon is suspected to be relatively circumscribed, and a considerable period of time has elapsed since the last record of the taxon, threatened status may well be justified