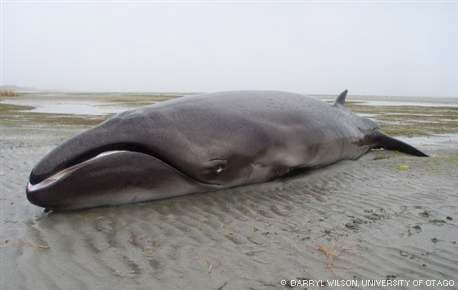 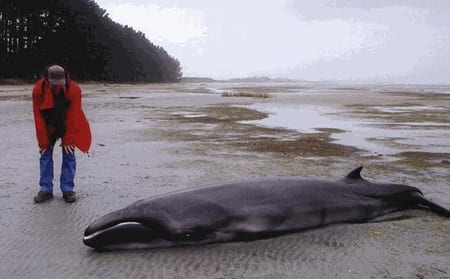 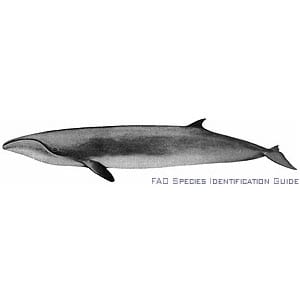 Pygmy right whales, Caperea marginata (Gray, 1846), average 6.1-6.4 m in length, and weigh a maximum of 4,500 kg. Males tend to be slightly smaller than females. They are dark gray on the dorsal side, which becomes increasingly darker with age. The ventral side is white. The flanks of the pygmy right whale feature two distinct chevron-shaped markings. They have a small falcate (curved) dorsal fin located on the posterior end of the body. The small, narrow, rounded flippers are darker than the rest of the body. The tail flukes have a slight notch in the center.

Pygmy right whales are classified in their own Family (Neobalaenidae) though it shares many characteristics (such as mouth shape) with other right whales such as the North Atlantic and Pacific right whales, southern right whales and bowhead whales. The upper jaw is arched while the lower jaw, which extends slightly beyond the upper jaw, is curved. They upper jaw features between 210-230 baleen plates on each side that measure up to 69 cm and are yellow-white with a dark brown band. The baleen plates of the pygmy right whale are stronger and more flexible than other baleen whale species. Two grooves are located on the throat similar to the throat grooves of the gray whale. Pygmy right whales have small heads and small blowholes. Their skeletal structure consists of 17 pairs of broad, flat ribs that extend 2/3 of the body length towards the posterior end. Pygmy right whales have more rib pairs than any other baleen whale, which some consider the reason to classify this species in a family by itself.


Pygmy right whales, Caperea marginata, are found in temperate waters of the southern hemisphere. They are frequently sighted in Tasmania and seasonally along the coasts of South Australia, New Zealand, South Africa, the Falkland Islands, and some areas of Antarctica.

Pygmy right whales, Caperea marginata, primarily feed on copepods, but examination of the stomach contents of stranded whales shown that krill is also part of their diet.

Very little data exists on the reproductive habits of pygmy right whales. Pregnant females have been found stranded in shallow waters, which may indicate that they give birth in shallow coastal waters. There is also some evidence that they move closer inshore to sheltered, shallow bays in spring and summer.

Total population numbers of pygmy right whales, Caperea marginata, are unknown. They are not known to have ever been hunted commercially or by subsistence hunters.