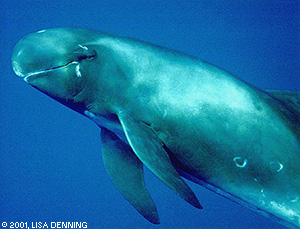 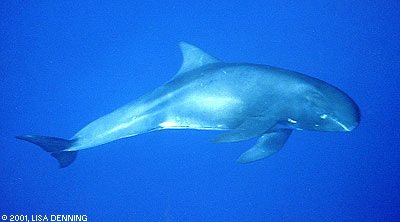 Pygmy killer whales, Feresa attenuata (Gray, 1874), are very similar in appearance to melon-headed whales and to juvenile false killer whales. From a distance it is very difficult to tell these three apart. The shape of the head, the dorsal fin and the flippers of pygmy killer whales are different from the other two. The head of Feresa attenuata is rounded and lacks a beak. They have an underslung jaw and white lips, and usually a white patch on the tip of the lower jaw. The skull is asymmetrical and the right jaw is smaller and usually has one less tooth than the left jaw. The teeth are large and conical. There are usually 8-11 pairs of teeth in the upper jaw and 11-13 pairs of teeth in the lower jaw.

Pygmy killer whales have a sub-triangular, long based, high dorsal fin with a tip that points backward. The dorsal fin is located near the center of the body and lacks rigidity, often inclining to the side. The flippers of pygmy killer whales are moderate in length and have rounded tips.

The body of Feresa attenuata is slender, though the midsection forward is slightly more robust than the midsection back. Pygmy killer whales are not whale-sized at all; rather, they are average-sized dolphins and part of the Family Delphinidae. An adult ranges in length from 2.1-2.6 m and weighs between 110-170 kg. The coloring is dark gray to black with some paler markings on the underside, as well as some white on the belly. Feresa attenuata has a groove on the skin of its belly that extends from up front to their umbilicus (navel) to their anus. In both males and females this groove contains the umbilicus, the anus and the genitals.

Longevity in this species is poorly understood.

At the water’s surface, pygmy killer whales are quite acrobatic. They are often seen leaping, spy hopping, tail slapping, and occasionally bowriding. Social groups of this species are usually made up of approximately 25 individuals. In areas where they are more frequently sighted, such at the Hawaiian Islands, herds contain up to 50 individuals and on rare occasions a few hundred.

Pygmy killer whales are found around Japan, Hawaii and in the warmer eastern areas of the North Pacific Ocean. It is also found in the West Indian area and around tropical western Africa in the Atlantic Ocean as well as in the Indian Ocean and the Gulf of Mexico.
https://www.youtube.com/watch?v=hG8YKoR3dVs

Feresa attenuata is primarily a species of tropical waters, though it has been spotted in cooler waters off the west coast of Southern Africa and Peru. It prefers sub-tropical and tropical waters usually in deep water in the open oceans and is rarely found in closed water. Pygmy killer whales are believed to be non-migratory, but little is known about their migratory habits.

Little is known about the predators of pygmy killer whales. Their large size and aggressiveness makes them invulnerable to many predators, but perhaps not to large sharks or larger cetaceans, such as orca (killer whales).

There is no information on mating in pygmy killer whales.

Feresa attenuata is listed in Appendix II of the Convention of International Trade in Endangered Species of Wild Fauna and Flora (CITES). Those listed in Appendix II, as stated on the CITES web site, are “species which although not necessarily threatened with extinction may become so unless trade is subject to strict regulation.” As well as non-threatened species that must be subject to regulation in order to control threatened species.

“A few individuals are known to be taken in drives and in driftnets in various regions, most notably Japan and Sri Lanka. Reports on the small cetacean fisheries of St. Vincent and Lamelera suggest that pygmy killer whales form a very small proportion of the catch, and that catches probably have little impact on the populations in those areas. In Sri Lanka, there is additional mortality of this and other species due to harpooning of dolphins for use as bait on long-lines for sharks, billfish, and other oceanic fishes.” – Convention on Migratory species (CMS)

“Although they comprise less than 2% of all cetaceans in monitored by-catches in gillnet fisheries in Trincomalee, Sri Lanka and in villages on the south-west coast of Sri Lanka, this may amount to 300-900 of the 15,000-45,000 dolphins estimated to die each year in such fisheries. The numbers of animals killed incidentally in net fisheries, such as those in Sri Lanka, may be much higher than is so far documented because monitoring of these widespread activities is incomplete. In the long term, such takes may have a significant impact on stocks resident in areas where pygmy killer whales (and other small cetaceans) and extensive gillnetting operations overlap. Small incidental catches are known in fisheries in other areas, e.g. the Philippines.” – Convention on Migratory species (CMS)

“There are also reports on the presence of hydrocarbon residues, including DDT, Dieldrin and PCBs in various tissues of three pygmy killer whales from the Gulf and Atlantic coasts of Florida.” – Convention on Migratory species (CMS)