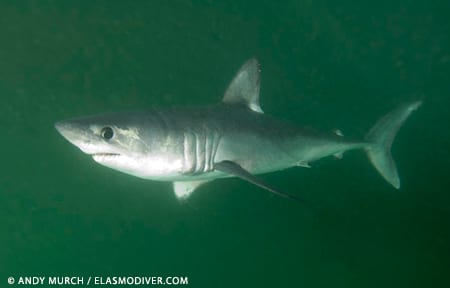 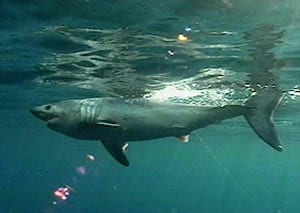 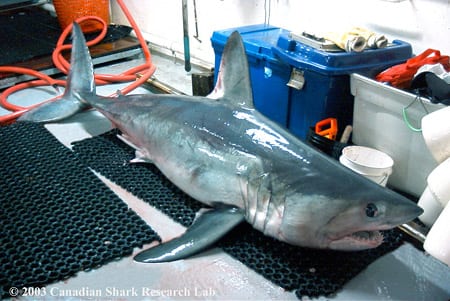 Porbeagle sharks, Lamna nasus (Bonnaterre, 1788), aka blue dogs, beaumaris sharks (UK), and mackerel sharks, are closely related to salmon sharks, Lamna ditropis, measuring up to 3.7 m in length and weighing up to 230 kg. The life span of this species is about 30 years. Porbeagles are stout large sharks with large black eyes, pointed snouts (slightly longer and more pointed than salmon sharks’), and small, smooth, narrow teeth. They are dark blue to gray on their dorsal (upper) sides, white on their ventral (under) sides and on the lower rear edges of their first dorsal fin.

As with all sharks in the Family Lamnidae, porbeagles maintain their body temperature above ambient water temperature through thermoregulation. Few other fishes have this ability other than fast swimmers such as tuna. Their body temperature is regulated by vascular counter-current heat exchangers (retia mirabilia) found in the muscle and viscera along with vascular shunts that route blood flow. These allow the sharks to retain heat produced by metabolic processes. Porbeagles can increase their body temperature up to 7-10°C above the temperature of the surrounding water. This helps them adapt to the cold waters they prefer and facilitates fast swimming.

Porbeagle sharks, Lamna nasus, are found in the western Atlantic Ocean from Newfoundland, Canada to New Jersey, USA, and possibly to southern Brazil and Argentina. In the eastern Atlantic, porbeagles are found around Iceland and in the western Barents Sea to South Africa, as well as in the Mediterranean. In the southwest Pacific Ocean porbeagles are found off Australia and New Zealand, and in the southeast Pacific off Chile. In the Southern Ocean this species is found off South Georgia and the Kerguelen Islands.

Porbeagles inhabit waters both over continental shelves as well as ocean basins. They prefer cold water between 1-18°C, however sightings have been reported in waters up to 23°C. The depth range for the porbeagle shark appears to be between 0-715 m.

Porbeagle sharks feed on small pelagic schooling fishes such as: lancetfish, herring, sauries, mackerels, and groundfish such as: sand lances, lumpsuckers, flounders, hakes, and cod. They also prey on other sharks and squid.

Porbeagle sharks, Lamna nasus, are ovoviviparous. Like other shark species, the mating ritual begins with the male shark grasping the female by biting her while he inserts his clasper into her cloaca to fertilize her. Females often have scars as a result, which sometimes helps scientists determine whether or not females have recently mated. Gestation is thought to last 8-9 months after which litters of 1-6 pups are born. Four pups is the average with 2 pups per uterus. Pups are born at about 68-80 cm in length.

In the northern hemisphere, porbeagles mate between autumn and winter and give birth between spring and summer. It is thought that southern hemisphere populations in New Zealand and Australia give birth during winter.

Porbeagle sharks, Lamna nasus, are potentially dangerous to humans because of their large size, however human-shark conflicts with this species are extremely rare. Only two unprovoked bites have been reported. The porbeagle is hunted commercially and caught as bycatch by commercial fisheries, and consequently, populations in the North Atlantic have significantly declined.

Porbeagles are hunted commercially in Norway and Canada where fisheries are regulated. They are also caught there as bycatch, and are the second most common bycatch species in Norway. They are also frequently caught as bycatch by Japanese longliners. They are hunted for their meat, fins, oil and fishmeal. Porbeagles are also fished recreationally to some extent in the United Kingdom, Ireland, the United States, and Canada.

Porbeagles have been observed making fast passes at divers on oil platforms in the North Sea, but they did not attack. This is likely agonistic (defensive) or exploratory behavior.

Endangered (EN)
A taxon is Endangered when the best available evidence indicates that it meets any of the criteria A to E for Endangered (see Section V), and it is therefore considered to be facing a very high risk of extinction in the wild.

Biology of the Porbeagle (Lamna nasus) – ReefQuest Centre for Shark Research
Porbeagle Shark – Fisheries and Oceans Canada
Elasmodiver.com – image database of sharks, skates, rays, and chimaera’s from around the world by Andy Murch