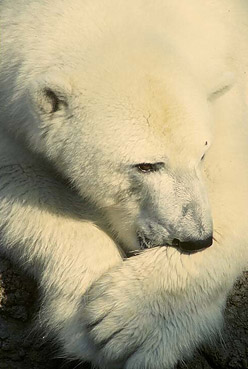 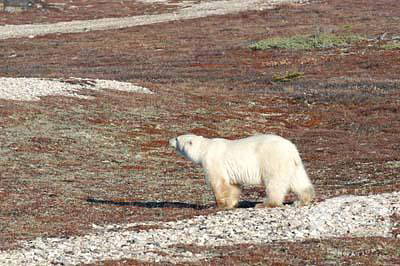 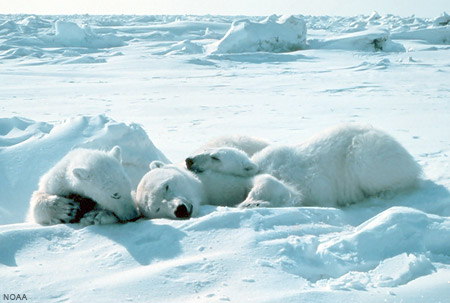 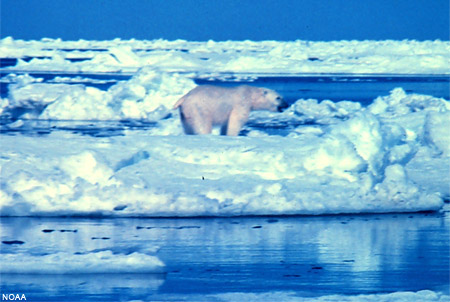 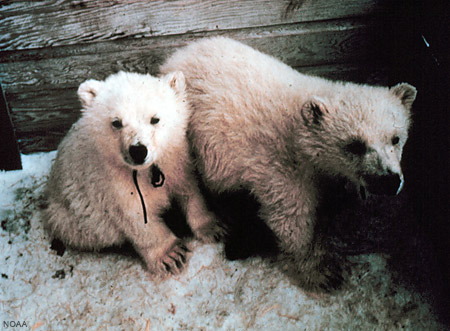 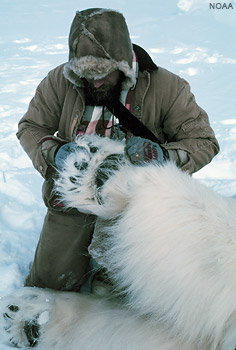 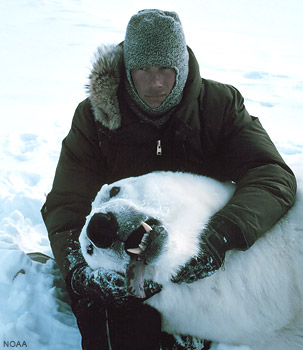 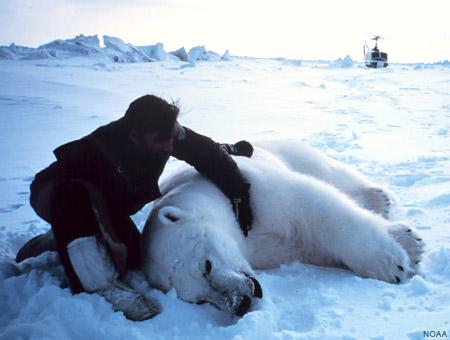 Polar bears, Ursus maritimus (Phipps, 1774), aka ice or snow bears, are the largest land carnivores with stocky bodies that can weight up to 800 kg. Although their bodies are similar, their heads are somewhat smaller than other bears and they have an elongated neck. Adult males weigh between 300-800 kg and can reach 2.5 m in length from nose to tail. Females weigh between 150-300 kg and reach between 1.8-2 m in length. Their pelage (fur) is generally off-white, but often appears more yellow during the summer because of oxidation and at times can appear brown or gray. In contrast to their light colored fur, polar bear’s skin is black. Their forepaws are broad making excellent paddles for swimming in the sea. The soles of both of their hind and fore paws are insulated with fur which also helps with traction in ice and snow. The average lifespan of polar bears is 25-30 years.

Polar bears are found throughout the arctic region surrounding the North Pole. They have been seen as far south as the southern tips of Greenland and Iceland, and during winter, they are found along the southern edge of the ice pack or northern edge of ice formed off the coasts of the continents. Six defined populations are found in: Wrangel Island and western Alaska, northern Alaska, the Canadian Arctic archipelago, Greenland, Svalbard-Franz Josef Land and central Siberia.

The ice edge and pressure ridges where fractures and refreezing occur provide the best hunting grounds. Polar bears are very mobile and will travel north and south as far as 1,000 km as the ice melts and freezes. During summer polar bears tend to remain on islands or coastlines with landfast ice, however they are also found drifting on ice floes or stranded on land where they are forced to endure warm weather.

Polar bears are predominantly carnivorous, although they may also consume vegetation at times. Their primary prey is the ringed seal, Phoca hispida, however bearded seals, Erignathus barbatus, harp seals, Pagophilus groenlandicus, hooded seals, Cystophora cristata, walruses, Odobenus rosmarus, and sea birds are also prey for polar bears. They also scavenge carrion of seals, walruses, and whales. Polar bears often consume only the blubber of the animal for its high caloric value relative to meat which helps them maintain a thick layer of fat for both insulation and energy during times when food is scarce.

Breeding occurs from March to June every 2-4 years with an average of 3.1 years.

These mammals mate in late winter and early spring, generally from March to June. Delayed implantation extends gestation to 195-265 days. Pregnant females dig a winter den in the snow in October or November, generally within 8 km of the coast. The mother will give birth to 1-4 cubs between November and January and will nurse them until early Spring. The mortality rate for cubs is estimated to be 10-30%. Current population estimates of polar bears are between 20,000-25,000 with severe decreases in numbers predicted within the next 50-100 years due to the increasing warming of the Arctic due to global warming. 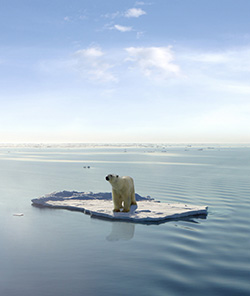 Polar bears are hunted by native people of the arctic for their fur and meat and have also been used for medicine. Arctic natives are still allowed to hunt polar bears in the United States, Canada and Greenland. Trophy and commercial hunters have been known to sell polar bear pelts for as much as $3,000 US. Polar bears are viewed as potentially dangerous to humans.

Meltdown: Arctic wildlife is on the brink of catastrophe – November, 2004 – Polar bears could be decades from extinction, according to Impacts of a Warming Arctic, a 4-year Arctic Climate Impact Assessment report on global warming made possible by the work of some 300 scientists from nations around the world.

Proposal to List the Polar Bear as Threatened Under the Endangered Species Act
The Service (U.S. Fish & Wildlife Service – Alaska) has proposed to protect the polar bear as a threatened species under the Endangered Species Act (ESA.) A proposed rule (pdf) that would add the polar bear to the federal list of threatened and endangered species was published on January 9, 2007, opening a 90-day comment period on this proposed listing. – Polar Bear Conservation, U.S. Fish & Wildlife Service – Alaska

The polar bear is now listed as Vulnerable (VU A3c) on the IUCN RedList due to habitat loss (arctic sea ice hunting grounds) attributed to global warming (aka climate change):

“The assessment is based on a suspected population reduction of >30% within three generations (45 years) due to decline in area of occupancy (AOO), extent of occurrence (EOO) and habitat quality.

Polar bears rely almost entirely on the marine sea ice environment for their survival so that large scale changes in their habitat will impact the population (Derocher et al. 2004). Global climate change posses a substantial threat to the habitat of polar bears. Recent modeling of the trends for sea ice extent, thickness and timing of coverage predicts dramatic reductions in sea ice coverage over the next 50-100 years (Hassol 2004). Sea ice has declined considerably over the past half century. Additional declines of roughly 10-50% of annual sea ice are predicted by 2100. The summer sea ice is projected to decrease by 50-100% during the same period. In addition the quality of the remaining ice will decline. This change may also have a negative effect on the population size (Derocher et al. 2004). The effects of sea ice change are likely to show large differences and variability by geographic location and periods of time, although the long term trends clearly reveal substantial global reductions of the extent of ice coverage in the Arctic and the annual time frames when ice is present.

While all bear species have shown adaptability in coping with their surroundings and environment, polar bears are highly specialized for life in the Arctic marine environment. Polar bears exhibit low reproductive rates with long generational spans. These factors make facultative adaptation by polar bears to significantly reduced ice coverage scenarios unlikely. Polar bears did adapt to warmer climate periods of the past. Due to their long generation time and the current greater speed of global warming, it seems unlikely that polar bear will be able to adapt to the current warming trend in the Arctic. If climatic trends continue polar bears may become extirpated from most of their range within 100 years.

There is little doubt that polar bears will have a lesser AOO, EOO and habitat quality in the future. However, no direct relation exists between these measures and the abundance of polar bears. While some have speculated that polar bears might become extinct within 100 years from now, which would indicate a population decrease of >50% in 45 years based on a precautionary approach due to data uncertainty. A more realistic evaluation of the risk involved in the assessment makes it fair to suspect population reduction of >30%.

Other population stress factors that may also operate to impact recruitment or survival include toxic contaminants, shipping, recreational viewing, oil and gas exploration and development. In addition to this comes a potential risk of over-harvest due to increased quotas, excessive quotas or no quotas in Canada and Greenland and poaching in Russia.

This assessment was reviewed by all the participants at the 14th Working Meeting of the IUCN SSC Polar Bear Specialist Group held in Seattle, Washington, USA during June 20-24, 2005.”

Suit Pending to Keep Pesticides Out of Polar Bears
To stop the silent crisis of pesticide pollution building in the Arctic, last week the Center for Biological Diversity warned the Environmental Protection Agency that they’ll sue over its failure to protect polar bears and their habitat from toxic chemicals. Pesticides approved for U.S. use by the EPA eventually end up in the Arctic thanks to various atmospheric, oceanic, and biological pathways. And each time a chemical takes a step up the food chain, its strength is magnified; thus, in the Arctic, pesticides reach some of their greatest concentrations in polar bears, the region’s sovereign predators. Under the Endangered Species Act, the EPA is supposed to evaluate pesticides’ impacts on protected species before those pesticides are registered and approved — but the agency hasn’t acknowledged their effect on federally threatened polar bears, not to mention the entire Arctic ecosystem.

Considering that polar bears remain unprotected from their greatest threats due to a bad rule enacted under Bush — and left in place by President Barack Obama — the species now needs all the protection it can get from other dangers. The Center for Biological Diversity is also in court to save the bear from global warming and oil and gas development. This is the first legal challenge to pesticide registrations due to their impacts on the Arctic.