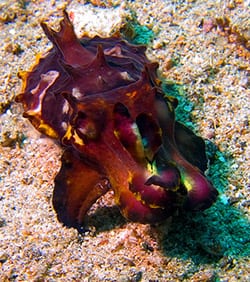 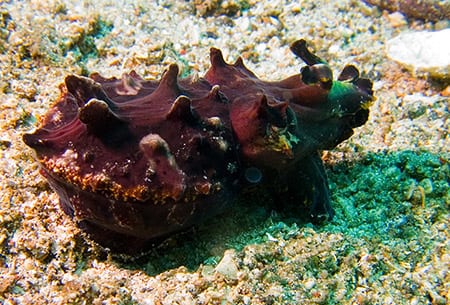 Pfeffer’s flamboyant cuttlefishes, Metasepia pfefferi (Hoyle, 1885), are truly amazing animals and well named. A favorite of underwater photographers and videographers, flamboyant cuttlefishes display stunning changing colors and patterns and actually “walk” along the bottom of the sea (the only one known to do so). M. pfefferi has a maximum mantle (the part behind the head) length of 6-8 cm with 3 pairs of flap-like fleshy papillae (fleshy nipple-like protuberances) and a V-shaped ventral (underside) fleshy ridge. These cuttlefishes also have large violet oblique V-shaped patches on both sides of their dorsal (topside) mantle. Papillae are also present over their eyes. The papillae are used for camouflage to break up the outline of the cuttlefish.

Flamboyant cuttlefishes have 8 broad blade-like arms with four rows of suckers. One of the left ventral arms is modified (called the hectocotylus) and is used for fertilization.

Like squid, these cuttlefish have two tentacles inside their arms used for capturing prey whose ends are called tentacle clubs which have flat surfaces with 5-6 suckers, 3-4 of which are relatively “enormous” and located in the center of the clubs.

Their fins are yellow and their arms are purplish with margins of yellow.

Their internal shell, or cuttlebone, is diamond-shaped (rhombic), thick and small without a keel-like vertical ridge like that in Metasepia tullbergi (the paintpot cuttlefish) and is 2/3 to 3/4 the length of the mantle.

Pfeffer’s flamboyant cuttlefish undergoes incredible color changes possible due to three types of structures contained within its skin, called chromatophores, leucophores and iridophores, which are small structures filled with colored ink which can be rapidly expanded and contracted to communicate or are used as camouflage within its habitat. These structures allow the cuttlefish to rapidly reflect a myriad of colors and change the textures of their skin (see this video for an example).

The name Sepia refers to the type of ink it produces. Like many squid, this ink is used to deceive predators by being ejected by their funnel into the water to form an ink cloud, while the cuttlefish swims to safety.

Cuttlefish (Sepiida) are in an Order of mollusks that possess an internal shell called the cuttlebone. The cuttlebone is made of calcium carbonate and is used by these mollusks to control their buoyancy. The cuttlebone is divided into many tiny chambers in which the cuttlefish can rapidly fill or empty of gas, depending on its buoyancy needs. They are in the Class Cephalopoda which is the group that contains cuttlefish, octopuses, squid and the chambered nautilus.

Pfeffer’s flamboyant cuttlefishes, Metasepia pfefferi, are active during the day and have been observed hunting small fish and crustaceans. With a base color of dark brown, when they are disturbed or attacked they quickly change color to a rippling pattern of black, dark brown, and white, with yellow patches around the mantle, arms, and eyes and the arm tips displaying bright red. This behavior advertises the poisonous nature of the flamboyant cuttlefish (the only known poisonous cuttlefish at this time).

Pfeffer’s flamboyant cuttlefishes, Metasepia pfefferi, mate face-to-face, with the male using his hectocotylus to insert a packet of sperm into a pouch on the underside of the female’s mantle. The female then fertilizes her eggs with sperm from the packet. The eggs are laid singly and placed by the female in protective crevices or under ledges in coral, rock, or wood. In one instance, around a dozen eggs were found under a coconut shell. She had placed them there through the central hole in the shell.

Freshly laid eggs are white and slowly turn translucent with time, making the baby cuttlefish clearly visible. From birth, juvenile M. pfefferi are capable of the same color and camouflage patterns as their parents.

Pfeffer’s flamboyant cuttlefishes are toxic according to a toxicology study of their muscle tissue, which makes it the third cephalopod and the only known cuttlefish found to be toxic. Research by Mark Norman with the Museum Victoria in Queensland, Australia has shown the toxin to be as lethal as that of blue-ringed octopuses.

According to MarineBio’s Cephalopod Advisor: “Due to their beautiful coloration and interesting behavior, these cuttlefish demand a premium in the aquarium trade. However, unlike Sepia species, Metasepia pfefferi has never been raised in captivity although a related species, M. tullberghi has. Additionally, they are easy to catch once located but don’t appear to be common. For these reasons and their potential toxicity, I advise against keeping them in home aquaria. Sepia species are a much better alternative; some species of Sepia have been raised for over ten generations in captivity.”