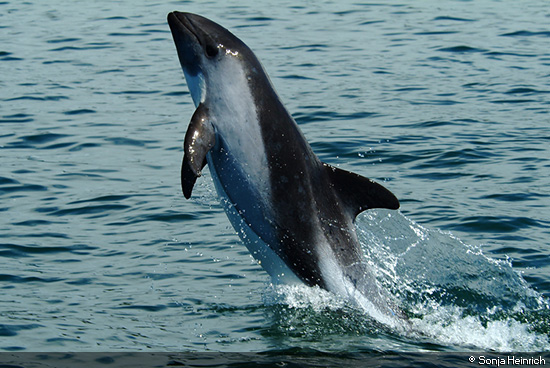 Peale’s dolphins, Lagenorhynchus australis (Peale, 1848), are small cetaceans with a stocky body and a very small beak. Males measure between 1.38-2.18 m; females measure between 1.3-2.1 m. The maximum recorded weight is 115 kg. Adult Peale’s dolphins are dark gray to black in color with lighter shading on the flanks. A curved light gray patch angles forward from the ventral side and flank narrowing to a single line that ends near the dorsal fin. The patch extends on the posterior end of the body toward the tail stock. A larger patch is found on the throat, which is light to medium gray in color with a thin dark line underneath. Peale’s dolphins also have a characteristic double black eye-ring that extends toward the snout. Mature dolphins have small knobs on the front edge of their flippers. Younger animals are lighter grey than adults. Peale’s dolphins can be confused with dusky dolphins throughout much of their range.

Population data are unavailable for Peale’s dolphins, however it is known that this dolphin is abundant in the Straits of Magellan around the coasts of the Falkland Islands and Chile. They are most commonly found south of Puerto Montt, Chile, the Falkland Islands, and Tierra del Fuego. They have been reported as far north as Buenos Aires, Argentina, and Concón, Chile.

Peale’s dolphins inhabit cool coastal waters and are often seen from shore. They prefer open coastline in the north and deeper bay sand channels in the southern part of their range where they are known to frequent rocky coasts and riptides at the entrance to fjords. Peale’s dolphins are often found in kelp beds where they swim and feed.

Peale’s dolphins give birth from October to April. Little data exist on the reproductive habits of this species.

Peale’s dolphins like all dolphin species, are at risk of entanglement in fishing nets and blubber studies have shown that marine pollution also impacts this species. In the Strait of Magellan and around Tierra del Fuego, they are hunted with harpoons and used as crab bait—in spite of the fact that dolphin hunting was banned in Chile in 1977. Data are needed on the numbers of dolphins killed for bait, however it appears that hunting of Peale’s dolphins for bait has decreased due to the overfishing of crab in its range.