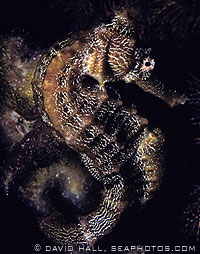 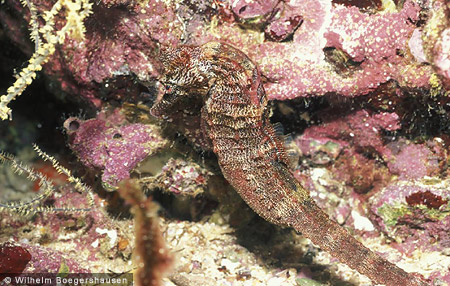 Pacific seahorses, also known as giant seahorses, Hippocampus ingen (Girard, 1858), are the  the largest of the ~56 known species of seahorses in the world, reaching up to 36 cm (14 in) in length. The Genus name is derived from the Greek hippos or “horse” and campus or “sea monster.”

Pacific seahorses share the common traits of seahorses, including a prehensile tail used for anchoring, skin instead of scales, a digestive tract without a distinct stomach, no teeth, and the ability to move each eye independently. Description based on 19 specimens: Common adult height is 13 to 19 cm, body rings that are divided into 11 trunk rings and 39 tail rings that have multiple spines on each ring. A snout length of 2.3 to 2.4 cm, that is fused (imagine life eating through a straw!). A head length of 2.1 to 2.5 cm, with 2 dorsal fins, and more rounded cheek spines on the females of this species. The coronet is medium to very high in females, and are tilted backwards with 5 well-defined points, sharp edges or flanges at the top.


Pacific seahorses are the only seahorse species found in the Eastern Pacific Ocean from San Diego in California to Peru including the Galapagos Islands. Pacific seahorses are nocturnal and are found in a variety of sub-tidal habitats to a maximum depth of about 60 m (200 ft). Since they are relatively strong swimmers they often venture to this depth shortly after birth, because there ability to grip with their tail is delayed. They are occasionally caught at the surface up to about 10 m. They are often camouflaged within the branches of gorgonians and black corals where they are seen to curl their tails around the branches, and can also be found in mangroves, seagrass meadows, rocky reefs, coral reefs and sponges. Some populations prefer coastal waters with sea kelp and eelgrass at depths between 1 and 20 meters.

Humans are responsible for destroying the environments where they live and polluting other environments causing habitat loss. In many regions, including China, the use of the seahorses as “medicine” continues, where their removal isn’t leaving enough remaining seahorses for their populations time to recover. Commercial fishing nets also catch tons of them annually as bycatch further lowering seahorse numbers.

Seahorses feed on bottom-swarming organisms such as mysids, small crustaceans and other plankton.

Mysids are very small (seldom exceeding 30 mm in length) shrimp-like crustaceans which can be found throughout the oceanic water column and are also found in freshwater environments as well. Some mysids feed on small particles which they collect by grooming their body surface, whereas others are predators of zooplankton. Some mysids are scavengers. Marine mysids often are found in large swarms and are an important part of many fish diets. Mysids are also called “opposum shrimp”, because of the brood pouch present in all mature females.

Mysids at present include more than 1,000 species, widespread over/around all the continents, inhabiting coastal and open sea waters, as well as continental fresh waters, with several taxa occurring also in different groundwater habitats and in anchialine caves.

Seahorses are super-skilled ambush predators. Rather than chasing their food, they wait, unnoticed as they are masters of camouflage, for prey to pass by. They then suck their unsuspecting victim though their tube-like mouth or bony snout, as they lack teeth and a stomach, before swallowing it whole with a rapid snap of their head. Camouflage also helps the seahorse avoid predators, such as crabs, sea urchins, rays and other fish. Although, the biggest predator of seahorses are humans.

Since they are attracted to shrimping grounds as a natural food source, populations are being decimated by shrimp trawlers as bycatch which takes a heavy toll on the larger and more mature seahorses of this species.

Pacific seahorses reach sexual maturity at 8 to 10 months, with a life span of 3 to 5 years. Once a seahorse finds a mate, they begin a lengthy final courtship dance. This dance can last eight hours or longer, and culminates in reproduction. The female seahorse uses her ovipositor to deposit her eggs in the male’s brood pouch where they are fertilized and the patch is sealed until he gives birth. As the embryos develop, the fluid inside the pouch changes in salinity to acclimate the embryos to the surrounding sea water.

Males can brood up to 2,000 eggs at once, but the normal brood is 60 to 400 for this species. Males may brood multiple times in a breeding season, which lasts from late September to early May. Although seahorses are not monogamists, they will form a breading pair during the length of the breading season. After a period of 14 to 15 days, varying with water temperature and diet, the male goes into labor and must force the young out of its pouch one at a time, sometimes taking hours, producing hundreds of live seahorses called fry. The baby seahorses are fully-formed and measure approximately 6 to 7 mm after birth. Birth marks the end of parental care, as young are born fully self-sufficient.

Seahorses are in constant risk from overfishing and habitat destruction. Seahorses are over-exploited with 20 million sold for traditional and Chinese medicines, the aquarium trade, and as dried curios every year. The dried seahorses are eaten to “cure” wheezing, impotence, as a general painkiller, and even to induce labor. Their habitats are among the most threatened marine environments. According to Project Seahorse of McGill University in Montreal, in the last five years many seahorse populations have declined by as much as 50 percent.

Humans also use the seahorse for crafts and jewelry. The popularity of this has soared as a common trend. People that live in areas of the seahorse continue to kill them for this purpose. They make items and sell them to local tourists. Some of these entities even have websites online where they sell such products.

Mexico and Peru are the largest exporters of pacific seahorses, with more than 1 dry ton sold annually, mostly to Asian markets. Recently, Mexico has listed giant seahorses as a species subject to special protection, and fishermen are not allowed to intentionally catch these animals. We will see if this has an impact on there export numbers.

Many university and aquarium breeding programs have reduce the need to collect species from the wild. These animals are reproducing enough to satisfy aquariums and zoos nationwide, as well as some of the private aquarium trade. Techniques learned during these efforts are also regularly shared with other aquariums and zoos internationally and have far reaching benefits.

Further conservation efforts are needed such as, species management, public awareness and communication as well as legislation such as seahorses being adopted by the Convention on International Trade in Endangered Species of Wild Fauna and Flora, also known as CITES. Which is an international agreement signed by 178 nations designed to ensure that international trade in animals and plants does not threaten their survival in the wild.