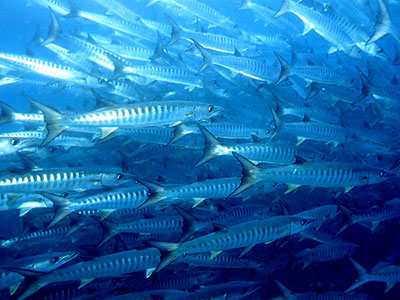 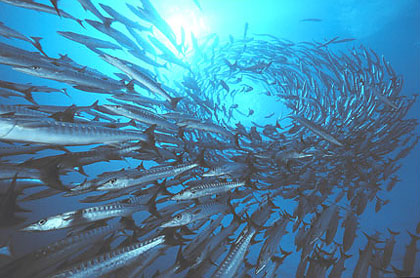 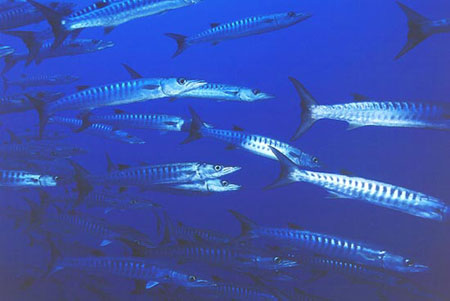 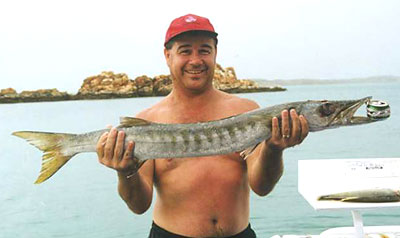 
Pacific barracuda are prevalent from Point Conception, California to Panama.

Pacific barracudas have well-deserved reputations for being a voracious hunters. Fish, such as groupers, grunts, snapper, bream and even young barracudas are among its prey. The barracuda attacks swiftly, charging at its prey at great speed and taking a large snapping bite with its powerful jaws. The barracuda uses its acute eyesight to hunt and will usually move quickly toward light or sudden movement that might indicate the presence of prey. In murky water, it tends to attack an object even before identifying it. When several barracudas hunt in a group they will often herd their prey together into a dense shoal, forcing the fish towards shallow water so that they can feed on a greater number of fish.

The nature, timing and location of spawning of Pacific barracudas has not yet been documented. Barracudas do not care for their young. They mature around 2 years of age. Distinctions between males and females have not yet been documented either. No one knows the life span of Pacific barracuda with certainty, but it is estimated at 14 years of age.

Smaller barracuda species swim in schools, but larger species tend to be solitary. Although barracuda attacks on humans are rare, they are feared by swimmers in some places. Evidence shows that the barracuda can be dangerous when provoked by humans, by erratic movement and by bright and/or shiny colors. Barracuda flesh can become poisonous when they feed on reef fish which in turn feed on algae or smaller fish which have fed on toxin-containing micro-alga such as Gambierdiscus toxicus. See more about ciguatera poisoning.