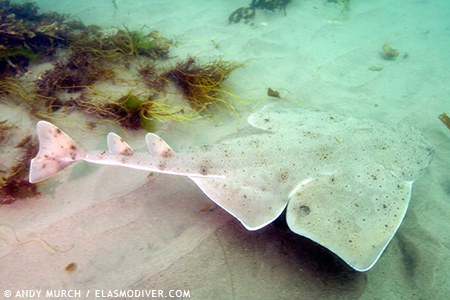 Pacific angelsharks, Squatina californica (Ayres, 1859), aka Pacific angel sharks or just angel sharks, look a lot like rays though they have their gill slits on the sides of their heads rather than underneath like rays. They reach about 1.52 m in length, can weigh up to 27 kg, and live for about 35 years. They are brown, reddish-brown or gray on top with scattered small dark colored marks that help them blend into the sea floor. They are white underneath.

Pacific angelsharks are ambush predators and are known by divers for being sluggish and relatively inactive during the day often found buried in sand or mud. They are not dangerous to humans (quite the opposite actually) but if touched or provoked their very quick bite can cause very painful injuries.


Pacific angelsharks, Squatina californica, are found in the eastern Pacific from southeastern Alaska to the Gulf of California, and from Costa Rica to southern Chile. Pacific angelsharks prefer tropical and subtropical waters ranging in depth from 3-205 m. They are often found on the continental shelf and near rocks, submarine canyons, and sometimes in kelp forests.

Pacific angelsharks feed primarily on bony fishes such as kelp bass, croakers, flatfishes, damselfishes, mackerels, and sardines as well as squid, especially during the winter and early spring when they are spawning in mass numbers in the shallows.

Individual sharks actively choose sites that will give them the best ambush success. They prefer junctions of sandy and rocky substrates near reefs, which are used by many fishes for shelter, usually orienting themselves either toward or parallel to nearby vertical structures. They also tend to face upslope, which may facilitate burying via falling sediment, bring more fish swimming downstream from the reef, and/or ease targeting by silhouetting prey against the sunlight.

Once settled at a successful site, a Pacific angelshark may remain there for up to ten days, re-burying itself on or near the same spot after every strike. As the local prey eventually learn to avoid the stationary predator, the shark will periodically shift to a new site several kilometers away at night. One study off Santa Catalina Island found that, over 13–25 hours, nine sharks together used only 1.5 km2 of space. A later, longer-term study found that the sharks’ sporadic position changes covered as much as 75 km over three months, almost circling the island. Single individuals swam up to 7.3 km in a single night.

Pacific angelsharks are primarily visual hunters; experiments in nature show that they will strike at fish-shaped targets without any additional electrical, chemical, vibrational, or behavioral cues. At night, they are guided by the bioluminescence of planktonic dinoflagellates and ostracods disturbed by moving prey. This species’ visual system is attuned to the wavelengths of light emitted by these planktonic organisms, showing the importance of night hunting. Pacific angelsharks are more likely to strike at prey approaching from the front than from the sides or back. It usually waits until the prey approaches to within 15 cm, as its attack is significantly less accurate beyond this distance. The strike is a stereotyped behavior in which the shark presses the forward lobes of its pectoral fins against the bottom and thrusts its head upwards at up to a 90° angle. Its mouth forms a tube when opened, creating a suction force, while its jaws protude forward to secure the prey between sharp teeth. During the strike, the eyes are rolled backward into the head for protection. The entire strike is often completed in under a tenth of a second.

Pacific angelsharks, Squatina californica, are ovoviviparous. They have a very low, minimum population doubling time of more than 14 years.

Off southern California, Pacific angelsharks have been reported giving birth between March and June to between 8-13 pups in waters between 55 and 90 m deep.

Population doubling time: The number of years required for the population of a given species to double its present size, given the current rate of population growth, used to measure a specie’s resilience to fishing pressure or other environmental stressors.

Pacific angelsharks can inflict painful lacerations when provoked or disturbed.

Due to commercial fishing this species is not as abundant throughout its range as it was in the past because, like many sharks, it is a slow growing shark and is latently sexually mature and at continual risk of overfishing.

Pacific angelsharks, Squatina californica, are listed as Near Threatened (NT) on the IUCN Red List of Threatened Species: