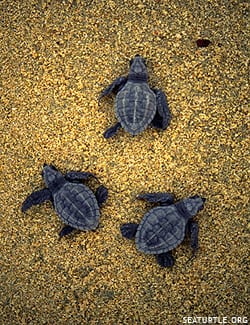 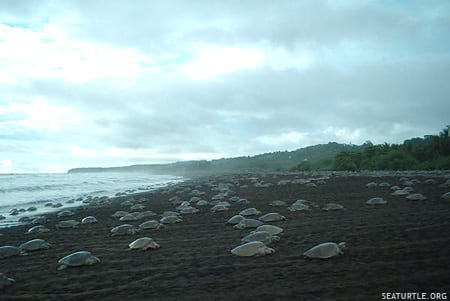 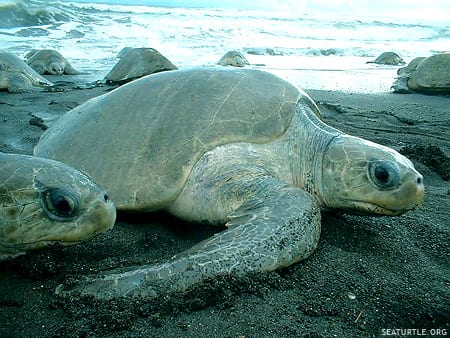 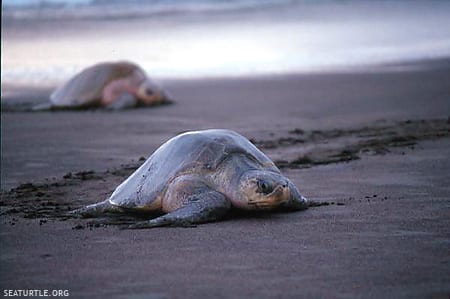 Olive ridley sea turtles, Lepidochelys olivacea (Eschscholtz, 1829), aka Pacific ridleys, are small, hard-shelled marine turtles, one of the two species of the genus Lepidochelys, and a member of the Family Cheloniidae. This species is unique in their variable numbers of vertebral (back) and costal (belly) scutes (bony plates), a characteristic that also varies by geographic location. Some olive ridleys have only five pairs of costals (the same number as Lepidochelys kempii, Kemp’s ridley sea turtles), however, in this species a division of costal scutes occurs creating a possible 6-9 pairs. Division of the “standard” scutes occurs at the posterior (rear) end of the carapace. Asymmetry in the number of costal scutes is frequent. Geographic variation in olive ridleys is subtle, and no subspecies are currently recognized. Olive ridleys with only five pairs of costal scutes are more abundant in the eastern Pacific. Another difference that varies by location is the color of the carapace, which is often lighter in olive ridleys found in the western Atlantic. Olive ridleys found in the eastern Pacific have a more “elevated” carapace.

In addition to the division of the costal scutes, the vertebral scutes and scales on the dorsal (upper) surface of their heads also show frequent division. The prefrontal scales typically number two pairs. Juvenile and adult olive ridleys have wide carapaces, similar to L. kempii. Their head is relatively large compared to other sea turtles in the Families Chelonia and Eretmochelys, but is smaller than that of adult Caretta (loggerheads), and slightly smaller than that of L. kempii.

Female olive ridleys found in Surinam range in carapace length from 62-74 cm; in Pacific Honduras from 58-74 cm; and in Pacific Mexico from 56-78 cm.

Sea turtles are some of the largest turtles in the world and live in almost every ocean of the world. Their smooth shells and paddle-like flippers help them speed through the water as fast as 24 kph. These long-distance travelers have been known to swim up to 4,828 km in one year.

Sea turtles spend almost all their lives submerged but must breathe air for the oxygen needed to meet the demands of vigorous activity. With a single explosive exhalation and rapid inhalation, sea turtles can quickly replace the air in their lungs. The lungs are adapted to permit a rapid exchange of oxygen and to prevent gasses from being trapped during deep dives. The blood of sea turtles can deliver oxygen efficiently to body tissues even at the pressures encountered during diving. During routine activity green and loggerhead sea turtles dive for about 4 to 5 minutes and surface to breathe for 1 to 3 seconds. A female loggerhead tracked at sea made up to 500 dives every 12 hours.

Sea turtles can rest or sleep underwater for several hours at a time but submergence time is much shorter while diving for food or while escaping predators. Breath-holding ability is affected by activity and stress, which is why sea turtles drown in shrimp trawls and other fishing gear within a relatively short time.

Because sea turtles are difficult to study in the open ocean, scientists are just beginning to learn about the life history of sea turtles. Today, radio transmitters, attached to nesting turtles, help track the sea creatures on their travels and provide valuable information useful for conservation efforts as all sea turtles are threatened or endangered with extinction.

The geographic distribution of the olive ridley shares interesting parallels with leatherback sea turtles, Dermochelys coriacea. Both species live in tropical open water and nest on Pacific shores of South America, with the olive ridley nesting from southern Sonora, Mexico, south to Colombia, and in moderate numbers in West Africa from about Mauritania south to the Congo. Both species occur but are rare in Australia and the Pacific islands. Non-nesting individuals also occur rarely in waters of the southwestern United States. They occur abundantly in Pacific Colombia and Ecuador, but only in small numbers in Peru and Chile. Olive ridleys have also been seen occasionally in Galapagos waters. In the Indian Ocean this species can be found in eastern India and Sri Lanka. Nesting has been observed on occasion alongside the green sea turtles at Hawke’s Bay, Pakistan and some nesting also occurs in New Britain, Mozambique, Madagascar, peninsular Malaysia and various other localities.

In the western Atlantic, nesting has been observed in eastern Surinam and in western French Guiana and northwestern Guyana. Non-nesting turtles have been seen as far west as Isla Margarita and Trinidad.

Despite its abundance, there is a surprising lack of data on the feeding habits of olive ridleys. The data that does exist reports that the diet in the western Atlantic and eastern Pacific includes crabs, shrimp, rock lobsters, jellyfish and tunicates. Algae has also been reported as a principal food.

Individual olive ridleys nest between 1-3 times per season and typically lay about 100 eggs each time. Olive ridleys nest both individually and in “arribadas” which are large nesting aggregations. This is one of the most fascinating characteristics of the olive ridley. 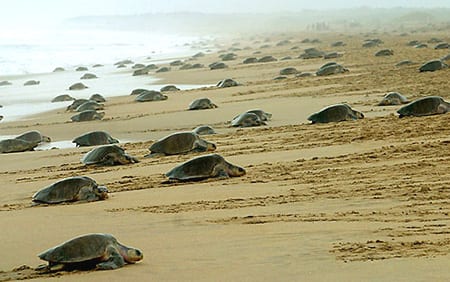 Olive ridley nesting areas were once widespread along the Pacific coast of Mexico, but currently they’re only found near La Escobilla. Smaller nesting concentrations have been reported from Morro Ayuta. Nesting aggregations of the olive ridley are also found in Costa Rica near Ostional on the Nicoya Peninsula and in the Santa Rosa National Park. Smaller arribadas also occur in Nicaragua and Panama. In the Indian Ocean, four arribada sites have been reported. In the Atlantic, small arribadas with a few hundred animals have been reported. Recent data show that olive ridleys reside in oceanic habitats of the eastern Pacific during the non-reproductive portion of their life cycle.

Nesting season is unpredictable and it is unknown what event triggers the animals to nest. Certain phases of the moon and tide and weather conditions have been suggested as triggers. Females can wait for weeks to lay their eggs until the timing is right.

Nesting can take between one and three hours. After a female turtle drags herself up the beach, she hollows out a pit with her back legs and deposits from 50-200 eggs the size of golf balls. When the last egg is laid, the turtle covers the eggs with sand, tamps down the sand with her plastron and flings more sand about with her flippers to erase any signs of the nest.

Based on the number of several large arribadas, it is likely that the olive ridley is the most abundant sea turtle species in the world. Declines in arribadas have been reported, however, at several arribada beaches. Concentration of the reproductive olive ridleys into a few arribadas may jeopardize this species leaving them vulnerable to commercial exploitation, as has happened in Mexico and Ecuador. Additionally, in some arribadas it has been estimated that only about 5% of eggs laid produce hatchlings.

Declines in olive ridley populations have been observed attributed to commercial harvesting of adult turtles and eggs, incidental capture by commercial fisheries, particularly trawl fisheries, and coastal development resulting in a loss of nesting habitat. The olive ridley turtle was listed as endangered for the “Mexican nesting population” and threatened for all other populations on July 28, 1978. Since listing, there has been an additional decline in populations of this species, and was recommended that the olive ridley in the Western Atlantic be reclassified as endangered. This classification is needed based on reductions in populations in the Western Atlantic because this species is often caught in shrimp trawl nets. The western North Atlantic (Surinam and adjacent areas) nesting population has declined more than 80% since 1967. Declines have also been documented in Costa Rica, however other nesting populations along the Pacific coast of Mexico and Costa Rica appeared stable. In the Indian Ocean, Gahirmatha located in the Bhitarkanika Wildlife Sanctuary in India, supports perhaps the largest nesting population with an average of 398,000 females nesting in a given year.

This species is also threatened by human impact. Pesticides, heavy metals and PCBs have been detected in turtles and eggs, but their effect is currently unknown. Oil spills cause respiratory, skin, blood and salt gland problems. Marine debris such as plastic bags, plastic and styrofoam, tar, balloons and plastic pellets have been discovered in dead olive ridley stomachs. Consumption of synthetic materials interferes with metabolism and harms the animal through absorption of toxic byproducts. Marine recreation, boating, and ship traffic also threatens this species due to propeller and collision injuries.