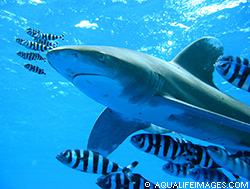 Oceanic whitetip sharks, Carcharhinus longimanus (Poey, 1861), aka white-tipped shark, whitetip oceanic shark and whitetip shark, are large stocky sharks with a huge, rounded first dorsal fins and long, wide-tipped pectoral fins. Their snouts are blunt and rounded; their upper teeth are triangular and they have an interdorsal ridge. Their dorsal side (upper) is usually dark gray with a bronze tinge, sometimes brown or blue; and their ventral (lower) side is white, sometimes with a yellow tinge and the tips of their first dorsal, pectorals, and lower lobe of their caudal (tail) fins are often white or have white spots. Their ventral surface of their pelvic fins, apices (tips) of anal and second dorsal fins, and ventral lobe of the caudal fin often have black spots and black or dusky saddle-marks are found in front of their second dorsal fin and along the upper margin of their caudal fin. They grow up to 4 m in total length with a maximum weight of 168 kg and age of 22 years.

Oceanic whitetip sharks are an oceanic deep-water species which sometimes comes close to shore. They are found from the surface to depths of at least 150 m. They are frequently accompanied by remora, Coryphaena, pilot fishes, and sea turtles.

One of the more interesting facets of the oceanic whitetip’s behavior is its association with the shortfin pilot whale, Globicephala macrorhynchus, off Hawaii, as described by Jeremy Stafford-Deitsch (1988). Oceanic whitetips are often found swimming with big pods of pilot whales, and often follow the whales when they dive down into the depths. The reason whitetips hang around pilot whales is not known, but it is presumed that the sharks follow the whales to feed on squid found at depth by the whales. This behavior likely occurs in Hawaiian waters, and other areas where pilot whales and whitetips share habitat.

There is a pronounced partial segregation by size and sex in some areas. Viviparous; litter size 1-15 pups; 60-65 cm at birth. Distinct pairing with embrace.

This is an active, almost fearless shark also associated with human attacks. MarineBio considers this shark the most potentially dangerous after great whites, tiger, and bull sharks, especially for open-ocean divers. This species is likely responsible for open-ocean attacks following air or sea disasters. Oceanic whitetips can be very aggressive and unpredictable in the presence of potential prey. Sold commercially fresh, frozen, smoked, and dried-salted for human consumption; hides for leather, fins for shark fin soup, liver oil for vitamins, and processed into fishmeal.

This species is a widespread and common large pelagic shark of warm oceanic waters. It presumably has a low reproductive capacity, but is extremely abundant and wide-ranging and is subject to fishery pressure as a common bycatch species with tuna and other pelagic species. This bycatch is reportedly either inadequately reported or unrecorded. The fins are highly prized in trade although the carcass is often discarded. Fishery pressure is likely to persist, if not increase in future, and the impact of this fishing pressure is presently unknown.

AQUALIFEIMAGES.com – dedicated to the people in this world who love underwater life.