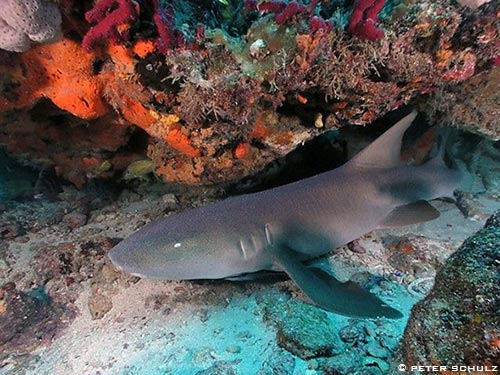 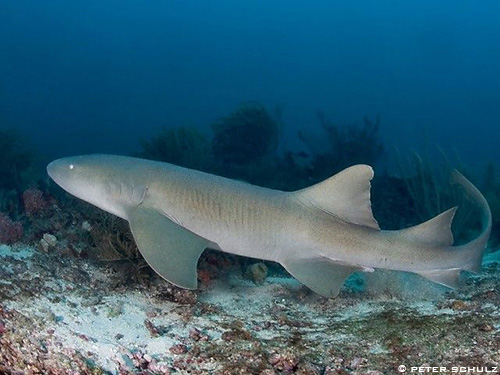 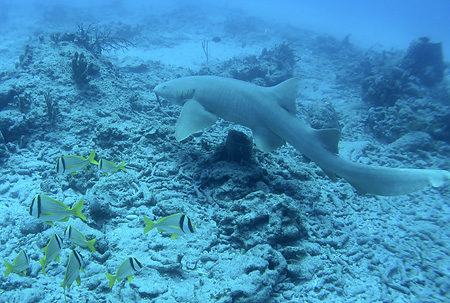 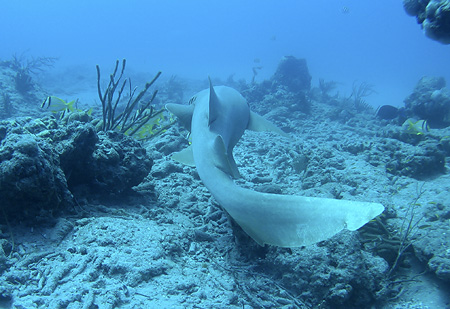 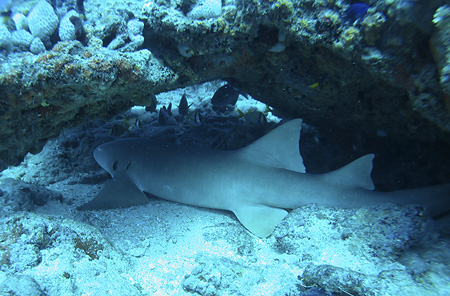 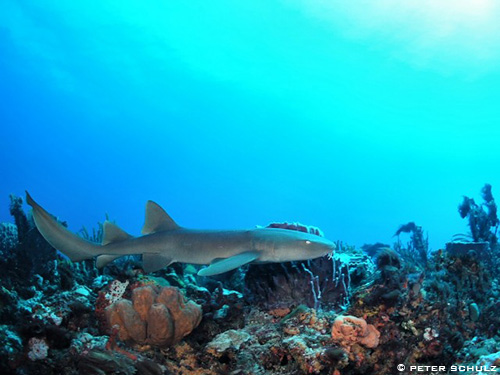 Nurse sharks, Ginglymostoma cirratum (Bonnaterre, 1788), reach a maximum of 4.3 m total length; maximum weight is 110 kg. The nurse shark is a common reef-associated bottom-dwelling shark found in brackish and marine environments in the shallows to 100 m. It has moderately long barbels between the nostrils, nasoral (near the nostrils) grooves are present, the mouth is well in front of the eyes, small spiracles, the precaudal tail is shorter than the head and body, the dorsal fins are broadly rounded (the first much larger than the second and anal fins), caudal fin moderately long, over 1/4 of total body length, yellow-brown to gray-brown in color, with or without small dark spots and obscure dorsal saddle markings.

Nurse sharks are ovoviviparous that give birth to 21-28 pups in a litter. Young in the uterus are sustained by a large supply of yolk. Females give birth in late spring and summer in waters off Florida. During courtship, a pair (sometimes a triplet) of adults were observed engaged in synchronized parallel swimming. A male may grab one of the female’s pectoral fins with his mouth which induces the female to pivot 90° and roll on her back on the bottom. Then the male inserts a clasper in her vent, and then rolls on his back beside the female.

Nurse sharks are non-aggressive and will generally swim away when approached; they are one of the most docile animals in the sea. However, some unprovoked attacks on swimmers and divers have been reported. If disturbed the bite is powerful and capable of inflicting serious injury. In some instances, jaws release was accomplished only after using surgical instruments.

It is not true that that all sharks need to swim in order to breathe, and when they cannot for whatever reason, they die. Sharks breathe primarily by using a ram-jet ventilation system used while they are swimming. Some sharks, however, have a second system based on respiratory pumping of water. Nurse sharks can switch to this respiratory system when they are at rest, saving energy and the necessity to swim to move water and oxygen over their gills. This dual respiratory system is especially important for bottom dwellers such as nurse sharks.