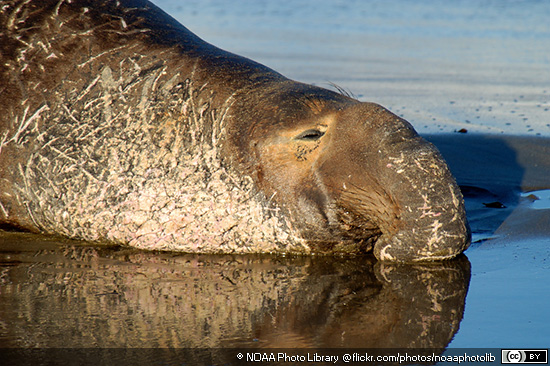 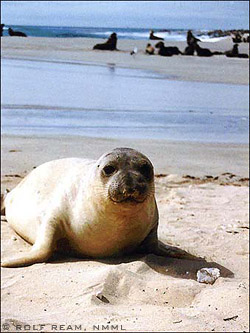 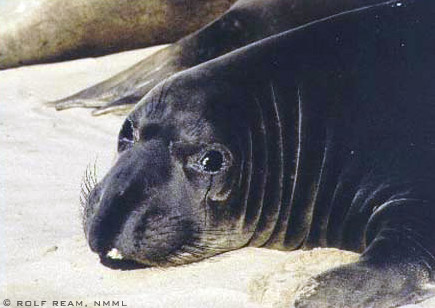 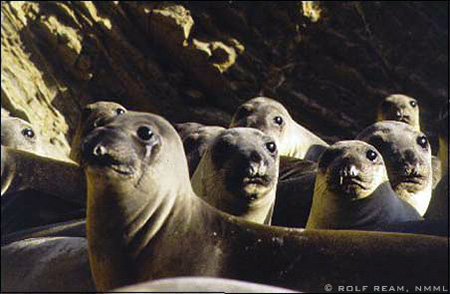 They are a highly migratory species and are well known for their incredible diving abilities. Like their cousins the southern elephant seals, these seals are able to dive very deeply for extremely long periods of time compared to other seals. Males dive to 350-800 m on average and females to 300-600 m. Their dives average 13-17 minutes, longer for males, followed by a brief <3 minute surface interval. The deepest dive for a northern elephant seal was recorded to be 1,500 m deep for 1.5-2 hours. These seals remain submerged 80-95% of the time that they spent at sea. Researchers have identified five different dive patterns typically associated with either travel, sleep or foraging. Northern elephant seals also hold their breaths for as long as 25 minutes while hauled out (on land).

Northern elephant seals can be found on the coast and offshore islands of California and Baja California. They migrate twice a year from California to Mexico and males migrate to the feeding areas in the north Pacific Ocean, in the Gulf of Alaska, and near the eastern Aleutian Islands. Females tend to feed further south between 40-45°N. The northern elephant seal is the only mammal with a biannual migratory pattern. The first migration occurs following the winter breeding season, and the second after the summer molt. Males spend about 250 days at sea each year and travel at least 21,000 km and the females spend about 300 days at sea and travel at least 18,000 km.

Population estimates for California is about 84,000 northern elephant seals and 32,000 are estimated along Mexico based on data from 1991. Seals congregate onshore during breeding season, molt season, and the juvenile haulout period in the autumn.

Northern elephant seals are preyed on by great white sharks, a significant cause of mortality in juvenile seals, and sometimes also by orcas (killer whales).

Pups are born about 1.5 m in length and 30 kg in weight. Females reach sexual maturity at 3-5 years of age, males at 4-6 years although males reach their reproductive peak at 9-12 years. Large adult males arrive at the breeding grounds in December to compete for access to females who usually give birth to the previous year’s pup in January 2-7 days after her arrival. The pups are born with black hair which is replaced by a silvery coat after they are weaned, about 3-4 weeks later.

Toward the end of the nursing period, the mother mates then leaves to feed. Her pup lives off its blubber reserves for 1-2 months before hunting for its own food. Adults do not feed while they are ashore during breeding season, some males for up to 3 months, losing approximately 36% of their weight during this period.

Northern elephant seals undergo an annual molt on shore during the warmer months between March-July for about 2-3 weeks. They undergo a “radical molt” because the fur comes off in sheets. Each sex and age class molts at a different time, beginning with immature seals early in the season and ending with the bulls, which molt in July.

In the autumn, just prior to the breeding season, juvenile seals congregate at the colony sites for around 2 months, beginning in late September and extending through to November.

Northern elephant seals, Mirounga angustirostris, were almost hunted to extinction in the 19th century for their blubber. Only about 100-1,000 remained on the Mexican Isla de Guadalupe. In the early 20th century, the species received protection under Mexican and U.S. law, which allowed the northern elephant seal to successfully recover. In California the population grows at an annual rate of 20-30% and new rookeries are being established by the seals. The recovery has been so successful that numbers may now be approaching peak levels and, in some colonies such as the Farallon Islands, haulout space is limited. In Mexico, the population appears stable or slightly decreasing, although increasing numbers of individuals are being observed in the Gulf of California.

Today’s northern elephant seals are descended from the few seals that remained before the species was protected, therefore their genetic diversity is likely limited. Northern elephant seals are threatened by El Niño events such as the 1997-98 event when northern elephant seal pup mortality rose to 80%. El Niño events cause severe winter storms, elevated sea levels, heavy rains and high tides that can submerge colonies and wash away pups. Similar mortality was observed during the 1982-83 El Niño event. The overall effects of the 1997-98 El Niño showed that the Farallon Islands colony decreased by nearly half due to habitat changes caused by winter storms during the event. In California, entanglement in gillnets causes an average of 100 deaths per year. The swordfish and shark drift gillnet fisheries in Mexico also result in bycatch of this species.

A very small number of elephant seals are killed in the United States by deliberate shooting, collisions with boats, and collisions with cars on land. The northern elephant seal was previously listed as an Appendix II species under CITES but was deleted from the list in 1992. The species is protected in the U.S. under the Marine Mammal Protection Act of 1972 and in Mexico under the Ley General de Vida Silvestre NOM-059-ECOL-1994.