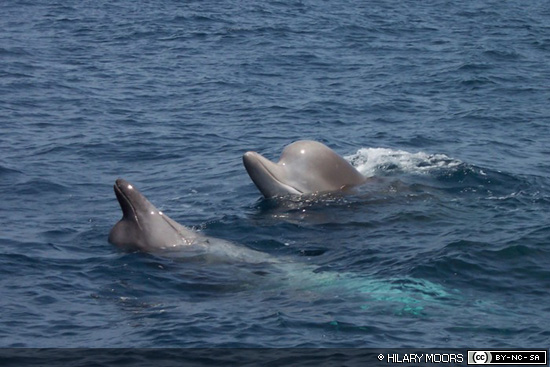 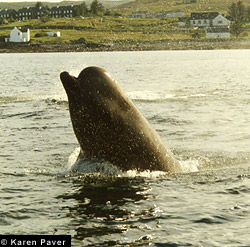 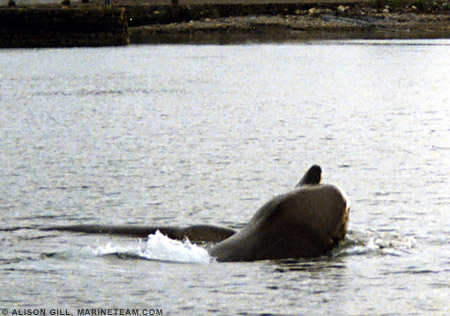 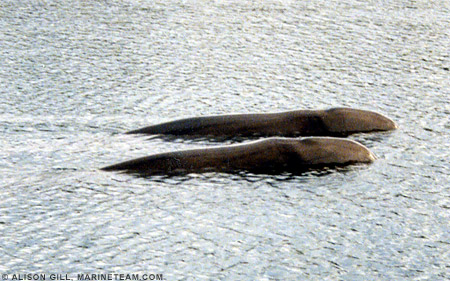 Northern bottlenose whales, Hyperoodon ampullatus (Forster, 1770), aka North Atlantic bottle-nosed whales and northern bottle-nosed whales, reach up to 9.8 m in length, averaging 6.7-7.6 m between 7-14 years, and weigh between 5,800-7,500 kg. Males are about 25% larger than females. Northern bottlenose whales live up to 37 years. These whales range in color from green-brown to gray with lighter gray-white markings on the body and lighter coloring on the lower part of the flanks and ventral surface.

They have a long, stout body and both sexes have large prominent melons that fade to yellow-white in older males. They have a short bottle-shaped beak with small short teeth located at the tip of the lower jaw in males. Females do not have teeth. They have a curved dorsal fin 30-38 cm in height, small flippers, and a notchless tail fluke. The dentition of the species is highly reduced, with males possessing one or occasionally two pairs of short teeth in the tip of the lower jaw.


Northern bottlenose whales, Hyperoodon ampullatus, can be found from the polar ice of the North Atlantic to Long Island Sound and to the Cape Verde Islands. They are commonly found in deep water over 1,000 m.

Northern bottlenose whales feed on squid, sea cucumbers, herring, cuttlefish, sea stars and other benthic invertebrates. Their feeding behavior is similar to sperm whales, Physeter macrocephalus, in that they make long, deep dives for up to 70 minutes from 80-800 m on average. The maximum recorded dive for this species is 1,453 m. They surface to breathe for about 10 minutes, often in the same location where their dive began.

Northern bottlenose whales, Hyperoodon ampullatus, mate during late spring/early summer. Females reach sexual maturity at 6-7 m in length or between 8-14 years, males at 7.3-7.6 m or between 7-9 years. Mating occurs in spring and early summer and calves are born from April to June following a year-long gestation period. Newborn calves measure about 3.5 m in length and are usually chocolate brown in color. Females nurse for about 1 year.

Northern bottlenose whales were hunted for centuries for their spermaceti oil and for food for indigenous people. This whale was also hunted commercially in Scotland, England, and Norway until 1973.