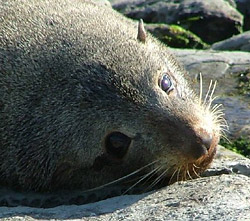 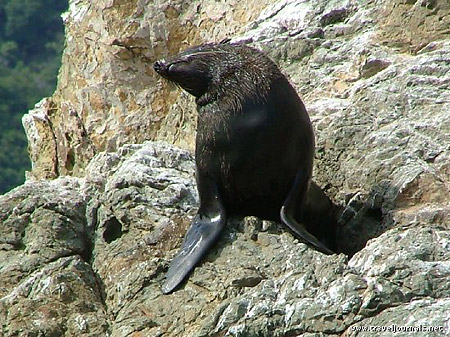 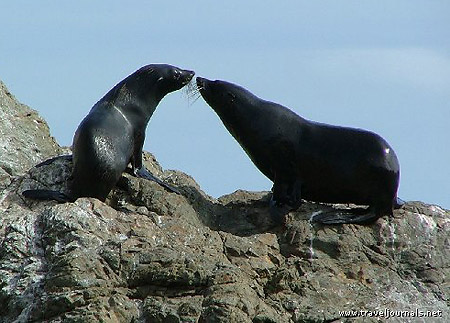 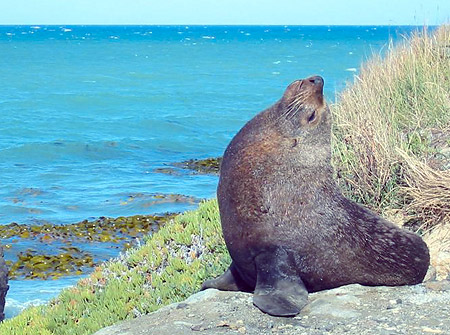 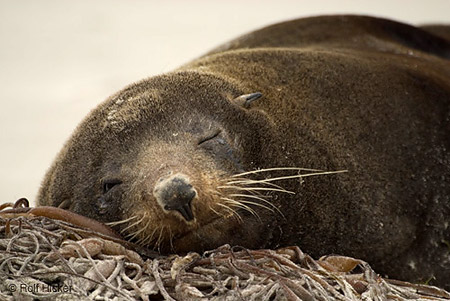 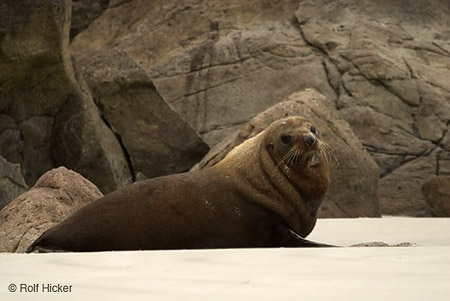 New Zealand fur seals, Arctocephalus forsteri (Lesson, 1828), like all fur “seals” are actually sea lions (Family Otariidae), and are actually considered rare in New Zealand. These “seals” have pointed noses, long whiskers, and 2 layers of dark brown fur. Adult males measure 1.5-2.5 m in length and weigh 120-180 kg. Adult females are smaller measuring 1-1.5 m in length and weigh 30-50 kg. This species has a shorter life span than other fur seal species, adult males live up to 15 years, females up to 12 years.


New Zealand fur seals, Arctocephalus forsteri, are found in both New Zealand and Australia and exchange between the 2 populations is very limited.

In New Zealand, this fur seal species can be found on the rocky coastline in the southern portion of the country on South Island and on many of the offshore islands. Other important rookeries are found in the Open Bay Islands, Cape Foulwind, Cascade Point, Wekakura Point, the Otago Peninsula, the Nelson-northern Marlborough region, Fjordland and the islands of the Foveaux Strait. Three small rookeries have also been established on the North Island in recent years. The Bounty Islands are home to about 21,500 seals as estimated in 1994, the largest fur seal concentration in New Zealand. The population estimate in New Zealand is thought to be around 50,000 and is thought to be increasing.

In Australia, population studies for New Zealand fur seals carried out in 1990 estimated an increasing population of about 34,600. Colonies there are more dispersed than those in New Zealand. The species can be found in southern Australia at the Pages Islands, and on Kangaroo Island in the Neptune Islands chain, which produces about 3/4 of the total pups in Australia. They are also found on Cape Leeuwin in Western Australia and on the south coast of Tasmania. Large numbers of young non-breeding male fur seals are found on Australia’s subantarctic Macquarie Island which were thought to have come from the New Zealand populations.

New Zealand fur seals, Arctocephalus forsteri, in New Zealand, are opportunistic feeders feeding on cephalopods (especially arrow squids, Nototodarus and Loligo) and fish such as anchovy, lanternfish, and hoki. Penguins on the subantarctic islands are occasionally consumed as well.

There is little data on New Zealand fur seals in Australia. On Kangaroo Island, they prey primarily on fish in winter, cephalopods in summer and also occasionally consume penguins.

Arctocephalus forsteri is known to dive up to depths of 270 m and are preyed upon by sharks, orcas (killer whales), leopard seals and Hooker’s (New Zealand) sea lions.

Female New Zealand fur seals, Arctocephalus forsteri, reach sexual maturity and bear their first pup at about 4-5 years of age. Males mature around the same age but do not reach territorial status until about 9-10 years of age. At this age, males begin competing for territory in early November to breed with 7-16 females. Territories are established in rocky areas that provide shelter and protection for the pups. Sheltered areas near intertidal pools are also often selected. Adult females often return to the same breeding site in late November to give birth 2-3 days later, then mate 7-8 days after giving birth. Newborn pups are born with a coat of long black hair, which is molted in 2-3 months and replaced by a coat of short gray-brown hair, which develops into the adult dark brown coat. At birth, pups are 55-70 cm in length and weigh 3.3-3.9 kg. Pup mortality during the first 300 days is estimated to be about 40%.

The feeding cycle begins 6-12 days after birth as the mother returns to sea for an average of 3-8 days to feed, returning to land for 2-7 days to nurse. The feeding trips lengthen as the pup begins to wean 9-10 months later. Adult males do not feed for the 2-3 month breeding season while they remain on land. Juvenile seals and non-breeding adults tend to stay away from the rookeries during the breeding season. Molting season takes place following breeding season between February-March.

In New Zealand, Arctocephalus forsteri was hunted for their fur by Polynesians and Europeans for centuries and nearly to extinction by the 19th century. They are now protected by New Zealand’s Marine Mammals Protection Act and are beginning to recover and re-colonize areas in their pre-exploitation range.

The species faces threats such as entanglement and drowning in fishing nets. One environmental group reported an estimate of more than 10,000 New Zealand fur seals drowned in trawl nets in New Zealand’s fisheries between 1989 and 1998, more than 1,500 of which were killed during the 1997-1998 season. About 5,600 of these were killed by South Island’s west coast hoki trawl fishery, more than 1,000 of which were killed during the 1998 season. As many as 23 seals have been caught in a single trawl net. Fortunately, in 1999 the number of fur seals caught in trawl nets was reduced to 215, however the reason for the reduction is unknown. Fisheries responsible for fur seals drownings include the southern blue whiting trawl fishery around the Bounty Islands, the Snares Island shelf squid fishery, the Puysegur hoki fishery, and the jack mackerel trawl fishery off the west coast of the South Island. Environmental groups are also pushing for the development of effective marine mammal exclusion devices in trawl nets.

Conflicts between New Zealand fur seals and aquaculture installations have also been reported. In 2001, to reduce the number of farmed salmon being consumed by seals, an aquaculture operation put in a request to the New Zealand Department of Conservation (DOC) to capture fur seals near its salmon farms in the Marlborough Sounds for relocation around the South Island. The DOC rejected the request stating that the process would have a negative impact on the seals. Environmental organizations applauded the decision recommending that seal-proof barriers be installed instead.

A Marine Mammal Sanctuary has been established in the Auckland Islands to protect the New Zealand sea lion Phocarctos hookeri, which is also within the New Zealand fur seal’s range. New Zealand’s subantarctic islands were granted “World Heritage” status by UNESCO in 1998.

In Australia, tens of thousands of New Zealand fur seals were killed by the fur trade, again almost to extinction. They were granted national protection in 1972. In 2000, New Zealand fur seals were afforded additional protection by the creation of a 16 million hectare Marine Park on the eastern side of Macquarie island. The Tasmanian government also expanded the Macquarie Island Nature Reserve to cover all Tasmanian waters to 3 nautical miles surrounding the island.

Because they can interfere with fishing gear, New Zealand fur seals are often shot by both commercial and recreational fishermen, but the extent of these shootings is unknown. Conflict with commercial fisheries is expected to increase as fur seal populations expand. Environmental groups are also advising against the establishment of fish farms near fur seal haulouts or feeding areas.

New Zealand fur seals, Arctocephalus forsteri, are listed as an Appendix II species under CITES and currently as a species of Least Concern (LC) on the IUCN Red List of Threatened Species.