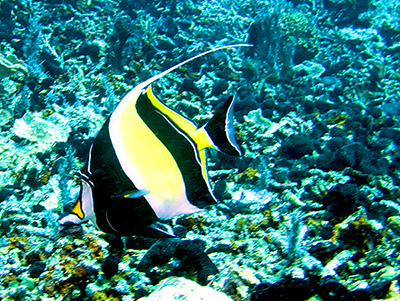 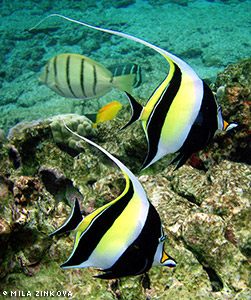 Moorish idols, Zanclus cornutus (Linnaeus, 1758), aka monish idols and morishidols have been one of the most iconic coral reef fishes for a long time. The Moors thought they brought happiness, which is how they got their name. They are highly sought for aquariums, but do not survive well in captivity. Moorish idols are closely related to, and may be a direct descendant of, the extinct Eozanclus brevirhostris.

Moorish idols are a small reef fish, with a maximum length of 23 cm, and are normally around 21 cm. They are boldly colored with white, yellow, and black vertical bars on their very compressed, disk-like bodies. They have long, tubular snouts that end with their small mouths, and their eyes are set high on their bodies. Adults have visible bumps above their eyes. The fins on Moorish idols are relatively small, except for the 7-8 dorsal spines, which extend and sweep back along the body in a whip-like manner. These dorsal extensions shorten with age.

Moorish idols are diurnal (active during the day) and may be seen alone or in pairs, occasionally forming large schools. Juveniles may be more likely to school in small groups than adults. Adult individuals mate for life, and males will show aggression towards other males.

Moorish idols, Zanclus cornutus, prefer flat reefs in depths between 3 m – 182 m, and can be found in both clear and murky subtropical waters, including inner lagoons, and rocky and coral reefs. They are widely distributed throughout the Indo-Pacific, including southern Japan, Micronesia, Hawaii, the Ducie Islands, and East Africa. In the eastern Pacific, they are found in the southern Gulf of California down to Peru.

Moorish idols, Zanclus cornutus, feed mainly on encrusted life, including sponges, tunicates, and other invertebrates and algae in the benthic zone (seafloor).

Moorish idols, Zanclus cornutus, have an unusually long, pelagic larval stage which is thought to be responsible for their wide distribution. Individuals reach a size of 7.5 cm, floating with the currents, before becoming free-swimming juveniles. Adults mate for life.

Moorish idols, Zanclus cornutus, are not yet evaluated by the IUCN. They are “harvested” for food in subsistence fisheries, and taken commercially for the aquarium trade.