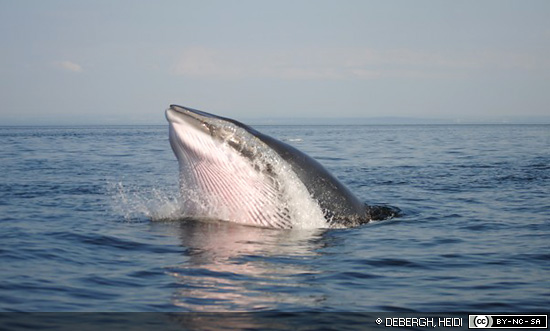 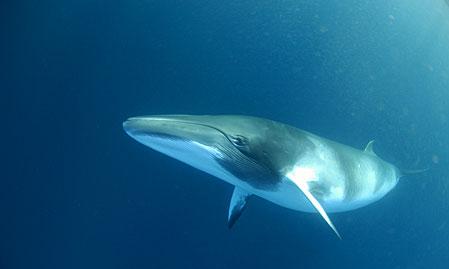 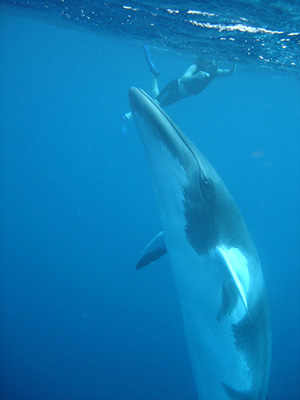 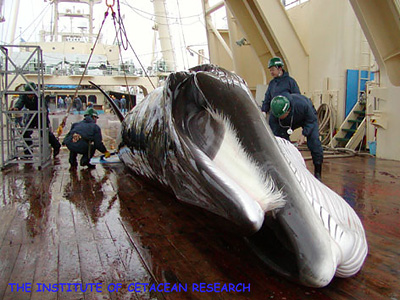 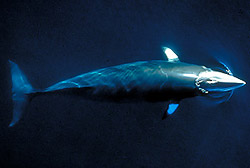 Minke whales are the smallest of the baleen whales with 50-70 throat grooves. They are part of the largest group of baleen whales called the rorquals (Family Balaenopteridae, the family that includes: blue whales, Bryde’s whales, fin whales, humpback whales, minke whales, and sei whales). These long, slender whales are much more streamlined than other whales. They have a pointed snout that is distinctively triangular, narrow, and pointed (hence its nicknames “sharp-headed finner” and “little piked whale”), paired blowholes, and a broad, flat rostrum (upper part of the head). The throat grooves, in addition to streamlining the shape of the whale, allow the throat area (called the cavum ventrale) to expand tremendously during feeding.

Minkes are the most abundant baleen whale and have a characteristic white band on each flipper (this is absent on the southern minke whales though), contrasting with its very dark gray top color, sometimes with pale trapezoidal stripes behind their flippers on the top. They have 2 blowholes, like all baleen whales.

There are three subspecies of common or northern minke whales, B. acutorostrata:

Minke whales are stocky, having a layer of blubber several inches thick. They have 50-70 throat grooves, running from the chin to the mid-section. The minke whale has two long flippers (up to 1/8 of the body size), a small dorsal fin, and a series of small ridges along the its back near the flukes (tail).

Minke whales either travel singly or congregated in small pods of about 2-3 whales.

Minke whales can dive for up to 20-25 minutes, but usually make shorter dives, lasting about 10-12 minutes. Just before diving, minke whales arch their back to a great degree, but the flukes do not rise out of the water.

At rest, minke whales spout (breathe) about 5-6 times per minute. The spout of the minke whale is a very low, almost inconspicuous stream that rises up to 2 m above the water. Minke whales begin exhaling before they reach the surface, which minimizes the blow.

Minke whales makes very loud sounds, up to 152 decibels (as loud as a jet taking off). They make series (trains) of grunts, thuds, and raspy sounds, usually in the 100-200 Hertz range. These sounds may be used in communication with other minke whales and in echolocation.

Minke whales live at the surface of the ocean in all but polar seas. They normally swim at 4.8-25 kph, but can go up to 29-34 kph in bursts when in danger. Their feeding speeds are slower, about 1.6-9.8 kph.
https://www.youtube.com/watch?v=1laNHgIzcFM

Minke whales, Balaenoptera bonaerensis, (like all baleen whales) are seasonal feeders and carnivores. They sieve through the ocean water with their baleen. They filter out small plankton, krill, and small fish, even chasing schools of sardines, anchovies, cod, herring, and capelin. They have the same diet as blue whales.

The baleen plates in their jaws have about 300 pairs of short, smooth plates. Their largest plates are less than 30 cm long and 13 cm wide. Their fine-textured baleen bristles are fringed and white.

Minke whale breeding occurs mostly in the late winter to early spring while near the surface and in warm waters. Their gestation period is about 10 months and their calves are born near the surface. Their newborns instinctively swim to the surface within 10 seconds for their first breath; helped by their mother using her flippers. Within 30 minutes of their birth, baby minkes can swim. Newborn calves are about 2.8 m long and weigh about 454 kg. Baby minkes, like all mammals, feed on their mother’s milk until weaning. Mother minkes and calves may stay together for a year or longer. Minke whales reach puberty at about 2 years of age. Minke whales live for over 50 years. It is estimated that there are about about 800,000 minke whales worldwide.

The story of this whale’s name illustrates its blighted history. Minke was an 18th-century Norwegian whaler, infamous for regularly breaking the rules concerning the sizes (and therefore species) of whales that he was permitted at that time to hunt. Soon all the small whales became known as “Minke’s whales”. Eventually, it was formally adopted as the name for this small species.

In fact, because they are such a small whale, the whaling industry generally ignored the minkes until quite recently. As the larger whales became more scarce (and gained protected status), so minke whales became more economically attractive. In the North Atlantic, from the 1920s, whaling for this species has been conducted along the coast of Norway. When whale populations dwindled in the late 1940s, the International Whaling Commission (IWC) was established to manage whale stocks. The IWC announced how many whales could be taken in any year, however, populations continued to decline. In 1985-1986 a worldwide moratorium on whaling was put in place, banning all whaling. Norway, however, “took out a reservation”, meaning that they could continue by IWC rules to legally hunt North Atlantic minke whales and, in 1993 and 1994, they killed several hundred. This has caused great dismay in other countries, including the U.K., who have officially objected to this hunt. In UK waters it is illegal to intentionally kill, injure, capture or harass any species of whale or dolphin. However, there is little in international law that can be done about hunting, except control of exports which is covered by CITES (the Convention for International Trade in Endangered Species). This is important because the main consumers of whale meat are still the Japanese and, if Norway could legally export whale meat to Japan, this might further promote whaling.