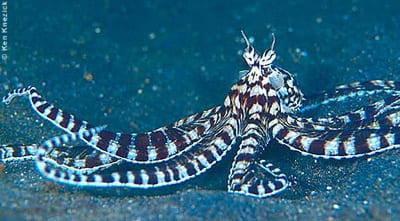 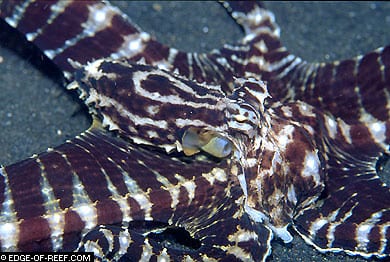 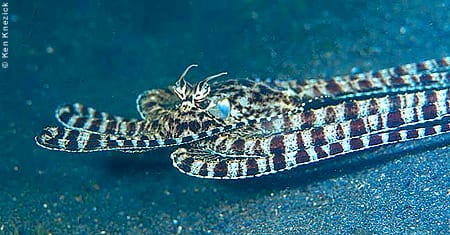 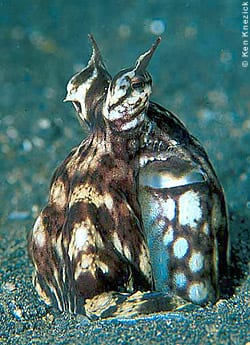 This fascinating creature was discovered in 1998 off the coast of Sulawesi in Indonesia on the bottom of a muddy river mouth. For the next 2 years, scientists filmed nine different mimic octopuses, Thaumoctopus mimicus (Norman & Hochberg, 2005), impersonating sea snakes, lionfish, and flatfish—a strategy used to avoid predators. Mimic octopuses reach about 60 cm in length and are typically brown and white striped.

Mimic octopuses have been observed shifting between impersonations as it crosses the ocean floor to return to its burrow.

Scientists speculate that additional mimic species will be found in muddy river and estuary bottoms in the tropics as these areas are typically unexplored.

All octopus species are highly intelligent and change the color and texture of their skin for camouflage to avoid predators. Until the mimic octopus was discovered, however, the remarkable ability to impersonate another animal had never been observed.

Although mimicry is a common survival strategy in nature, certain flies assume the black and yellow stripes of bees as a warning to potential predators, the mimic octopus is the first known species to take on the characteristics of multiple species. The creatures they mimic include:

» Sole fish: This flat, poisonous fish is imitated by the mimic octopus by building up speed through jet propulsion as it draws all of its arms together into a leaf-shaped wedge as it undulates in the manner of a swimming flat fish.

» Lion fish: To mimic the lion fish, the octopus hovers above the ocean floor with its arms spread wide, trailing from its body to take on the appearance of the lion fish’s poisonous fins.

» Sea snakes: The mimic octopus changes color taking on the yellow and black bands of the toxic sea snake as it waves 2 arms in opposite directions in the motion of two sea snakes.

This animal is so intelligent that it is able to discern which dangerous sea creature to impersonate that will present the greatest threat to its current possible predator. For example, scientists observed that when the octopus was attacked by territorial damselfishes, it mimicked the banded sea snake, a known predator of damselfishes.


Indo-pacific (Sulawesi and Bali in Indonesia), muddy estuary bottoms in the tropics.

Because mimic octopuses, Thaumoctopus mimicus, are found in muddy river bottoms and estuaries, its diet most likely consists of small crustaceans and fish.

And there’s another fantastic video by Eco Divers up on Facebook at facebook.com

Mimic Octopuses: Will we love them to death? – Dr. Roy Caldwell and Christopher D Shaw, Dr. James B. Wood, Editor

Opportunistic mimicry by a jawfish of a mimic octopus