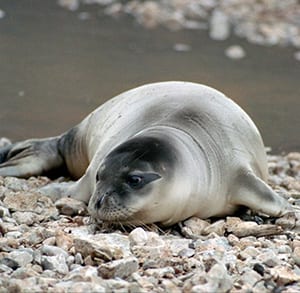 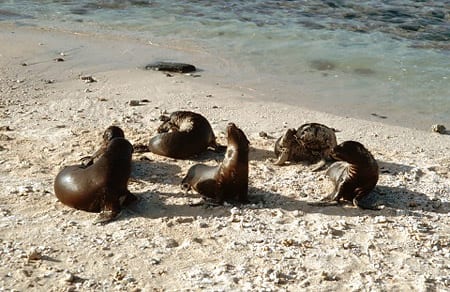 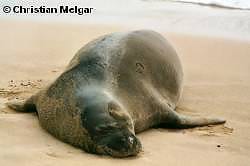 Mediterranean monk seals, Monachus monachus (Hermann, 1779), are nearly extinct and are not only the most endangered pinniped (seals, sea lions, and walruses) species, but are also one of the rarest animals in the world. Their small remaining population is estimated to be less than 400 seals. Their close relative, Caribbean monk seals, are already extinct, and Hawaiian monk seals are also Critically Endangered.

Adult male and female Mediterranean monk seals measure about 2.4 m in length on average. Adult males have an average weight of 315 kg, adult females are slightly smaller at an average weight of 300 kg. Adult coats are generally smooth dark brown (said to resemble the robe of a Franciscan friar, hence the name). The average life span is 20-30 years.

The remaining 400 individuals are found in remote areas around the Mediterranean Sea and northwest African coast with the largest populations around Mauritania, Greece, and Turkey. Small numbers are also present off Morocco, Algeria, Libya, the Portuguese Desertas Islands (Madeira), Croatia, and Cyprus.

They generally have no known predators, although a few reports describe predation by orca (killer whales) and sharks.

Sexual maturity of Mediterranean monk seals is reached between 4-6 years, and breeding season generally begins in September and lasts to November. Mating is thought to take place in the water. Pups are born with a black coat and a yellowish white patch with black spots on the ventral (under) side measuring 80-100 cm in length and weighing 17-24 kg. These patches facilitate identification and sexing of individual pups by scientists. The black coat is molted between 4-6 weeks after birth and replaced by a silvery gray coat. Pups are nursed for about 16-17 weeks and learn to dive in shallow waters close to the haulout cave. As they are weaned, they venture further away from the breeding grounds up to 10 km away and up to 40 m deep.

Mediterranean monk seals have been hunted and killed for centuries. In the distant past, they were hunted for their skin. More recently, they were killed by fishermen because they compete with target fishing species or for interfering with fishing gear. Currently, Mediterranean monk seals suffer from death by entanglement, depleted food sources due to overfishing, and increased human activity in the heavily populated Mediterranean region causing disturbance to Mediterranean monk seal populations. Increased marine traffic, fishing, coastal development force these seals to abandon their normal breeding areas on sandy and rocky beaches for caves where pup mortality increases.

In 1997 a mass mortality of Mediterranean monk seals near Mauritania reduced the population from an estimated 310 to <90. The exact cause of the deaths is unknown, however it is thought that a toxic red tide was to blame. In addition, a previously unidentified virus was found during post-mortem examinations. The Cap Blanc colony, where the mass mortality occurred, was the largest population of Mediterranean monk seals. The mass mortality prompted an international response that included the rehabilitation of four seal pups.

Further efforts to protect this species from extinction are ongoing. The Desertas Islands Natural Reserve and the National Marine Park of Alonnissos Northern Sporades in Greece were established as protected areas, and in March 2001, Mauritania announced a ban on all fishing, except traditional non-motorized fishing by local communities, to reduce the impact of overfishing in the 12,000 km2 coastal wetland covered by the boundaries of the Banc d’Arguin National Park.