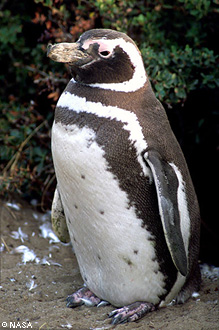 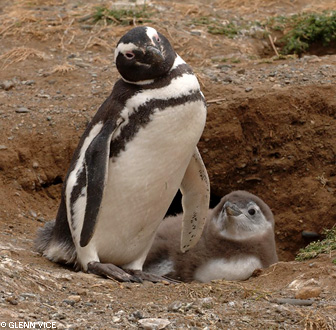 Magellanic penguins, Spheniscus magellanicus (Forster, 1781), stand about 70 cm tall and weigh an average of 4 kg. Their head and upper body is black and they have 2 wide black stripes, one under their chin and the other that forms an upside down “horseshoe” shape around their belly.


Magellanic penguins, Spheniscus magellanicus, are found around the Falkland Islands and the coasts of Argentina and Chile. They are an abundant species with an estimated 100,000 breeding pairs in the Falklands alone. Larger populations inhabit Argentina and Chile. Breeding colonies are found from the Gulf of San Matías in Argentina, south to Tierra del Fuego, and north along the Pacific coast of Chile up to Puerto Montt. Magellanic penguins nest in burrows in more sparsely populated colonies than other penguin species. Nest densities are estimated to range from 0.001 to 0.1 nests per square meter. This species prefers offshore islands with tall grasses and vegetation where they can find protection from birds of prey. Although the Atlantic coast of Argentina has less vegetation, it is still home to a large breeding colony.

Magellanic penguins are preyed on at sea by sea lions, leopard seals and orcas; birds of prey such as gulls and skuas prey on chicks and eggs.

Magellanic penguins, Spheniscus magellanicus, return to colonies in September to form nests and 2 eggs, equal in size, are laid in October. Eggs are incubated by both parents for about 40 days starting around November. Females take the first 2-3 week shift while the male forages up to 500 km away from the breeding site, then the female leaves to forage for the same length of time. When the chicks hatch, parents alternate brooding the chicks for about 1 month while the other forages each day. The chicks remain in the nests until they develop their adult plumage and do not form crèches (small groups of young penguins) like other penguin species. Once the chicks fledge, the parents return to the sea to forage until molting season, which begins in March and lasts about 1 month. Following the molting season, adults return to the sea until September. Females reach sexual maturity at 4 years of age, males at 5 years.

Magellanic penguins, Spheniscus magellanicus, are listed as Near Threatened A2bcde+3bcde+4bcde (NT) on the IUCN Red List of Threatened Species: