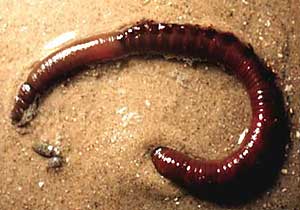 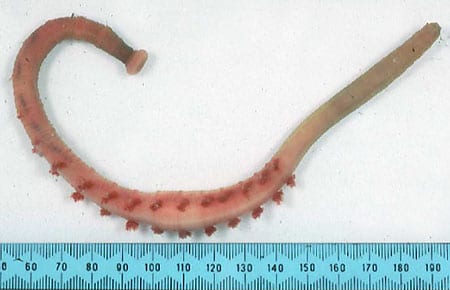 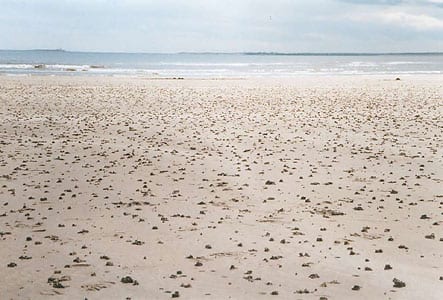 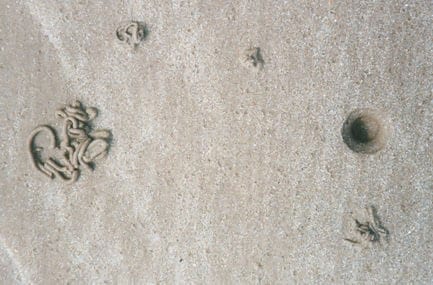 Lugworms, Arenicola marine (Linnaeus, 1758), also known as rock worms and the blow lug, are often confused with a similar species—the black lug, A. defodiens. Lugworms are burrow-dwelling annelid worms and can reach densities as high as 100-150 per square meter in certain areas (Fish, 1996). The lifespan of lugworms is estimated to be 5-6 years (Howie, 1984), and they can make up to 30% of the biomass of an average sandy beach, making them a very important part of the food web in their habitat. They bioturbate (re-work, re-oxygenate) the sand and serve as a food source for a wide variety of other animals such as flatfish and birds. Lugworms also have a clever way to avoid being eaten — the part of them which is usually exposed to predation (the tail) can be regrown if lost (like some lizards).

Lugworms have a wide distribution in northwest Europe and are found all around Britain on middle to lower shores in sand and muddy sand and in sheltered, estuarine sediments. Lugworms live in J-shaped burrows, about 20 cm below the surface and can tolerate salinities down to 12 ppt (Fish, 1996).

Lugworms feed on organic material such as micro-organisms and detritus present in the sediment. They ingest the sediment while in the burrow, leaving a depression on the surface sand. Once the sediment is stripped of its useful organic content it is expelled, producing the characteristic worm cast (see photo #3 above). Statocysts (an organ of equilibrium occurring especially among invertebrate animals and consisting usually of a fluid-filled vesicle in which are suspended statoliths—usually calcareous bodies) are found in this species and allow the animal to always burrow head down and correctly orient themselves for feeding, it has been shown that if an aquarium is tilted they will compensate for the difference and change position (Ruppert, 1991).

Lugworms have separate sexes with external fertilization and are known as ‘broadcast’ spawners breeding several times in their life. In the wild they are sexually mature at 2-3 years (Howie, 1984). These worms live in separate burrows, and entirely separated populations will release their eggs and sperm at low tide on only one or two days a year over a two week period in October to November. Spawning in males is accompanied by intermittent muscular contractions of the body wall, causing ejaculation through six pairs of ducts. These powerful contractions cause sperm to be released from all pores at the same time in bursts which are separated by periods of quiescence of up to several minutes. Spawning bursts continue for more than an hour until the worm is spent.

Females take much longer to spawn (up to 19 hours) and the process is less active, which reflects the fact that females keep eggs in their burrows whilst males must eject sperm onto the sand surface outside their burrows. Spawning occurs at low tide, and as the tide comes in, the viscous sperm puddles are washed, diluted and enter the burrows of the females. The sperm puddles contain inactive sperm, the addition of seawater triggers them to become active and begin swimming.

Fertilization occurs in the female burrow and the larvae undergo early development here, later moving to the surface to be transported by the tide to settle on firmer areas. They then develop in mucous tubes attached to the substratum. Once developed, the worms are carried by the tide to more sandy/mud sediments where they can burrow (Fish, 1996).

Lugworms are harmless and often an angler’s preferred bait for fishing cod, traditionally obtained by digging up beaches which can lead to environmental and sustainability problems. Such bait digging by sport fishermen is widespread in Britain and it is estimated that 75% of the members of the National Anglers Council in the UK dig their own bait. It has been shown that it takes at least a month for a dug-out area of lugworm beach to be repopulated near to its original density (McLusky, 1983).