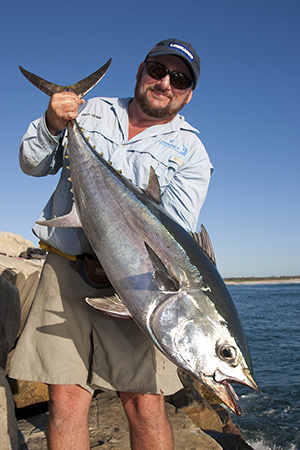 
The tropical neritic zone (the shallow part of the sea along the coast, above the continental shelf) is what longtail tunas call home. They avoid turbid areas, as well as areas with decreased salinity, such as estuaries. Their range of the Indo-West Pacific includes the Red Sea and East Africa to New Guinea, south to Australia, and north to Japan.

Longtail tunas feed on a variety of fishes, cephalopods, and crustaceans. They seem to particularly like stomatopod larvae and prawns.

Little is known about the reproduction of longtail tunas.

Longtail tunas are a highly commercially harvested species for food. The IUCN has not evaluated their conservation status, but the collapse of the populations of other tuna species due to overfishing gives cause for concern. They are a moderate to highly vulnerable species.