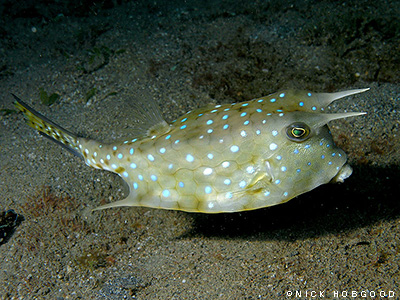 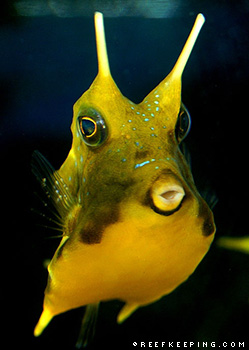 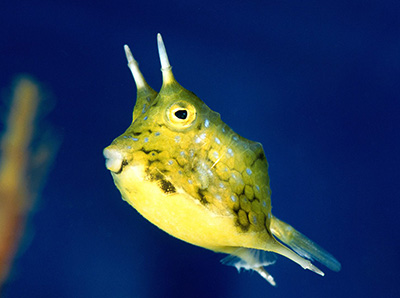 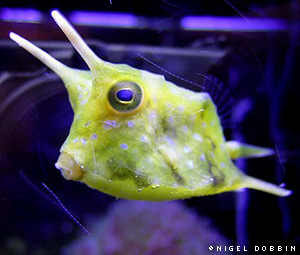 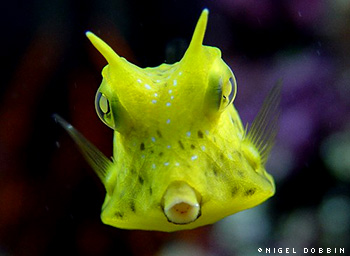 Longhorn cowfishes, Lactoria cornuta (Linnaeus, 1758), also known as long-horns, longhorned, long-horned cowfishes, horned boxfishes or trunkfishs, are a type of boxfish in the Ostraciidi family (~25 species known) and are easily identified by their rather comical appearance and two pairs of long horns, like those of a cow or bull, located on their heads and below their tails. Their horns are thought to have evolved because they make the fish hard to swallow for most predators. Their horns actually break off quite often but they regrow them within a few months. Longhorn cowfishes are shy fishes and grow up to 46 cm in length, their mouths are subterminal (on the underside of their head) and they have prominent lips. Longhorn cowfishes lacks gill covers but have a small slit or hole instead. Their scales are hexagonal and plate-like, which are fused together into a solid, triangular, boxlike carapace, from which their fins and tail protrude. Their rounded dorsal fin is small and has 9 soft rays. Their tail or caudal fins have 9-10 soft rays. Longhorn cowfishes are found in varying colors such as: green, light orange, yellow, and they are known to sometimes bear white or blue spots on their body and also display faint hexagonal or honeycombed patterns (due to their scales).

Longhorn cowfish have poisonous flesh, another characteristic that makes them unattractive to predators. They also release ostracitoxin when they becomes stressed by sudden movements, bright lights and loud sounds.

Cowfish appear to hover while swimming using a form of locomotion called Ostraciiform swimming. This type of swimming requires the movement of the dorsal fin and pectoral fins. Longhorn cowfish are known to be slow swimmers and are easily caught by hand causing them to often make a grunting sound.


Longhorn cowfishes’ primary habitat in the Indo-Pacific region are coral reefs in lagoons, on reef flats, protected seaward reefs and in coastal muddy or sandy habitats in still bays, and in harbors and estuaries. Adults are often solitary and territorial. Juveniles often associate in groups with Acropora corals, near river mouths, on protected shallow mudflats and in brackish water. They are found typically between 1–45 m but may live at depths up to 100 m.

Longhorn cowfishes are found in the Red Sea and off East Africa eastward through Indonesia to Marquesas and northward to southern Japan including Tuamotus, southern Korea, north to the Ryukyu Islands of southern Japan, south to Australia and Lord Howe Island and off southern Africa in the Atlantic.

Longhorn cowfishes, Lactoria cornuta, are omnivores and feed on benthic algae, various microorganisms, and foraminiferans that they find in sediments, on sponges, and polychaete worms in sand flats by blowing jets of water into the sand to expose them. They also feed on mollusks, small crustaceans and even small fishes. Predators include larger fishes such as albacore and big eye tuna.

Longhorn cowfishes are not known for sexual dimorphism (where males and females show distinct differences such as in size or coloration, etc.) and both males and females display a yellow to olive base color, which is decorated with white or bluish spots. They display a paired courtship just before or after sunset. Eggs and larvae are pelagic.

Longhorn cowfishes, Lactoria cornuta, are known in reports of ciguatera poisoning and have not been evaluated regarding its IUCN Red List Status. While scientists state that the longhorn cowfish is badly suited to home aquariums, this cowfish is becoming increasingly popular as a pet and has become the most well-known cowfish species in the aquarium trade.