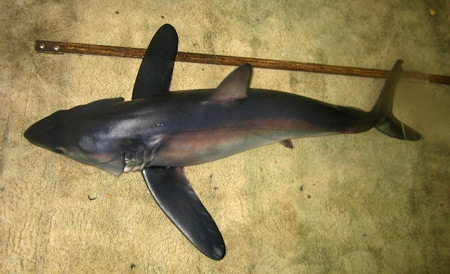 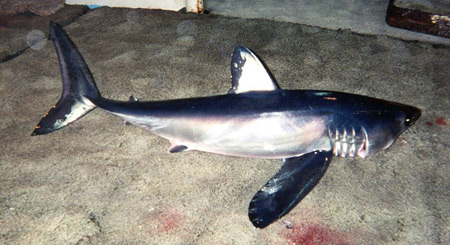 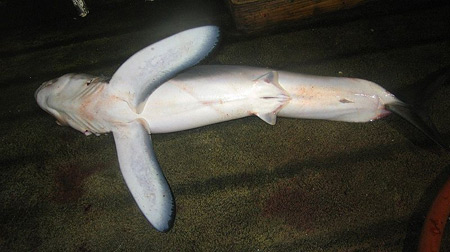 Longfin mako sharks, Isurus paucus (Guitart Manday, 1966), aka longfinned, longfin and big-eye mako sharks, are slender, spindle-shaped sharks with conical snouts. Their teeth are moderately long, smooth-edged, without basal cusplets. Their gill slits are long, extending partially onto the top of their heads. They have broad-tipped pectoral fins that are as long or longer than their head (measured by the straight-line distance from tip of snout to top of 5th gill slit). Their first dorsal fin origin is behind the rear tip of their pectoral fins. Their second dorsal and anal fins are small with pivoting bases. They have strong keels on their caudal peduncle and their caudal (tail) fin is lunate (sickle-shaped). Longfin makos are dark blue to bluish black above, fading to bluish grey on their flanks and the undersurface of their snouts. The area around their mouth is a dusky or bluish black.

Formally described only in 1966, longfin makos are one of the least known lamnids. They are also the second-largest member of its family, after white sharks. Their long, broad pectoral fins suggest that this species is slower and less active than shortfin makos.

Longfin makos have the same heat-retaining circulatory systems as other lamnids, although this species is not warm-bodied. Their large eyes indicate that they are a deep-dwelling species. Longline catches off northern Cuba are most commonly brought up from depths of 110 to 220 m.


Longfin mako sharks, Isurus paucus, are found in tropical to warm temperate seas, but records are spotty due in part to their confusion with shortfin makos. They are fairly common in the western Atlantic (Gulf Stream waters, northern Cuba to southeastern Florida) and possibly in the central Pacific (near Phoenix Island and north of Hawaii).

Longfin makos primarily inhabit the upper mesopelagic during the day, venturing into the epipelagic at night. Between North Carolina and the Grand banks, longline catches are made from May-October; distribution in northern parts of the western North Atlantic is apparently limited to the Gulf Stream and outer edges of the continental shelf.

Longfin mako sharks, Isurus paucus, likely feed on pelagic squids and schooling fishes. The diet of shortfin makos is relatively well known and includes a wide variety of teleosts (bony fishes) and cephalopods. Due to their similar size, shape, and dentition, it has long been assumed that longfin makos have a similar diet.

Longfin mako sharks, Isurus paucus, are ovoviviparous, featuring oophagy at the late stages of development. Litter size is 2-8 pups. Males mature at a length of about (2.0 m, females at about 2.5 m; there are no data on age at maturity or longevity for either sex.

Longfin mako sharks, Isurus paucus, are listed as Vulnerable (VU) (A2bd+3d+4bd). A taxon is Vulnerable when the best available evidence indicates that it meets any of the following criteria (A to E), and it is therefore considered to be facing a high risk of extinction in the wild.

They are often taken in the Cuban longline fishery off the north coast of Cuba; and probably taken regularly in the tropical pelagic Japanese longline fisheries for sale in Tokyo. In addition to longlines, this species is also taken on hook-and-line and with anchored gillnets. Their flesh is utilized fresh, frozen, and dried salted for human consumption.