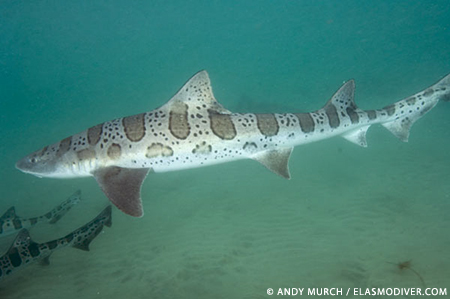 Leopard sharks, Triakis semifasciata (Girard, 1855), are members of the Houndsharks Family, Triakidae. Zebra sharks, Stegostoma fasciatum, are commonly confused with leopard sharks and share the same common name in Australia and SE Asia. Leopard sharks have short, broadly-rounded snouts, their first dorsal fins are moderately large and its origin is over their pectoral fins’ inner margins. Their second dorsal fin is nearly as large as the first one (height is about 3/4 of the first dorsal fin) and their anal fins are much smaller than their second dorsal fins. Their pectoral fins are broadly triangular and they have very conspicuous dark saddles and dots on their bodies. They have gray to bronze-gray upper bodies with light ventral (under) surfaces. Their average size is between 1.2-1.5 m and their maximum total length is about 1.8 m. Leopard sharks can weigh up to 18.4 kg and live as long as 30 years.

Leopard sharks are found in the Eastern Pacific Ocean: from Oregon to the Gulf of California, Mexico. They are currently an abundant species in cool and warm-temperate waters. They are found inshore and offshore in continental littoral waters. Most common on or near the bottom in shallow waters, between 4-90 m. They prefer sandy or muddy bays. They are active, strong swimmers and are known to form large schools that seem to be nomadic. The swimming motion of this species is described as undulating. Leopard sharks are often seen together with brown smooth-hounds, Mustelus henlei, and gray smooth-hounds, Mustelus californicus, or the piked dogfish, Squalus acanthias.

Leopard sharks, Triakis semifasciata, feed primarily on bottom-living invertebrates. Other small sharks have also been found in their stomachs. Their diet seems to change with seasons and their age/size.

Leopard sharks are aplacental viviparous (ovoviviparous) and they produce between 4-33 pups per litter after a gestation period of about 10-12 months. Their size at birth is about 20 cm, usually in April-May, and they grow very slowly. They reach maturity at an age of about 10 years, males at a size between 0.7-1.2 m, females at approximately 1.1-1.3 m, respectively. 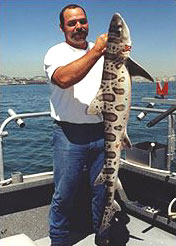 Leopard sharks are harmless to humans. This mid-sized coastal shark is fairly common in bays and estuaries and are taken both commercially and by recreational anglers.

Although a slow-growing, late-maturing shark with low productivity, management introduced in recent decades has reportedly protected the core of the population in California and Oregon waters from overfishing. Little is known of the stock status in Mexico.

LEAST CONCERN (LC) – A taxon is Least Concern when it has been evaluated against the criteria and does not qualify for Critically Endangered, Endangered, Vulnerable or Near Threatened. Widespread and abundant taxa are included in this category.