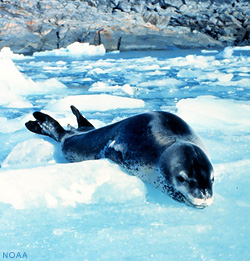 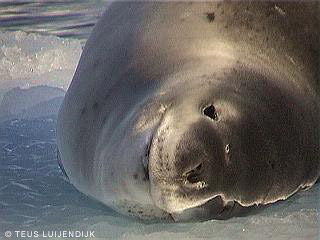 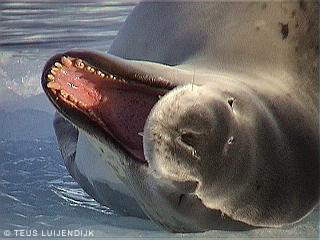 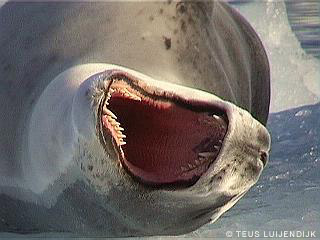 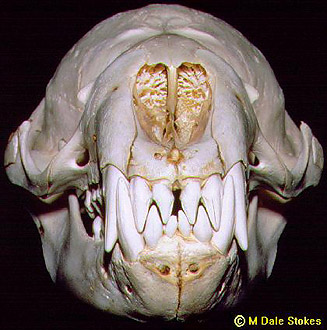 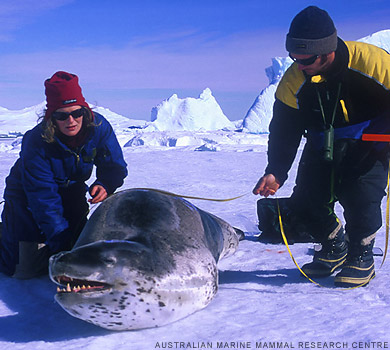 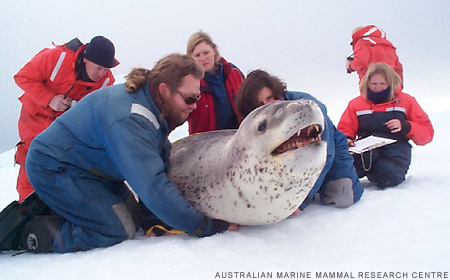 Leopard seals, Hydrurga leptonyx (Blainville, 1820), are large and impressive members of the seal family reaching between 2.41-3.38 m in length and weighing between 200-591 kg. Females are slightly larger than males. Their massive bodies have large heads and long broad foreflippers. Unlike other seal species that swim by moving their hind limbs side to side, leopard seals swim gracefully using long, powerful, simultaneous strokes of the forelimbs simultaneously. Adults are dark gray to black in color with varying dark spots on their dorsal (upper) side and pale on their ventral (under) side. Pup’s have soft, thick coats with a dorsal stripe and black spots on the light gray ventral side. Adults have well developed canine teeth, and three tubercles or lobes on the sides of their jaws that allow them to filter krill from the water.

Leopard seals are wide ranging found in the Atlantic and Pacific Oceans, and in the polar and subpolar waters of the Southern Hemisphere along the coast of Antarctica and on many subantarctic islands. They’ve also been seen on the South African and South Australian coasts, around Tasmania, New Zealand, Lord Howe Island, the Cook Islands, and Tierra del Fuego.

Adults are found on the outer fringes of pack ice. The young are found around subantarctic islands.

Leopard seals eat a varied diet. They are the only pinnipeds whose diet includes a significant amount of warm-blooded animals. They have been known to attack crabeater and fur seals (in the genus Arctocephalus). They prey on krill (estimated at 45% of their diet), other seals (30%) particularly young crabeater seals, penguins (10%), and fish and cephalopods (10%). Proportions vary according to age and availability. Like other seals, they are also known to scavenge the carrion of whales and other seals. 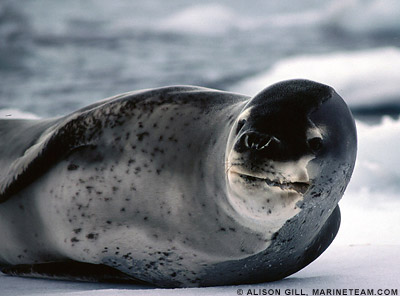 Leopard seals can dive up to 15 minutes, however because their diet includes warm-blooded animals they are not deep diving seals. Leopard seals are awkward on land, however, their unusually large fore-flippers give them speed and agility in the water. They are sometimes preyed on by orcas (killer whales).

Male leopard seals reach sexual maturity between age 6-7, females 3-7. Mating season lasts from November to February. Males are thought to be serially polygynous. Gestation lasts around 11 months, but implantation appears to be delayed for about 2 months. Most births occur in October and November. The female gives birth to a single pup weighing about 30 kg and about 1.6 m long and nurses for about a month. Males do not seem to participate in parental care. The life span of leopard seals is about 26 years.

Only small numbers of H. leptonyx populations are abundant in the preferred habitat, and the species is not exploited by humans. Leopard seals, especially young, seasonally depend on krill, but are less competitive than other krill-feeding species. H. leptonyx could, therefore, be one of the first predator species adversely affected by commercial krill fisheries. The species is currently rated as Least Concern (LC) by the International Union for the Conservation of Nature.

As with other seals of the Antarctic pack ice, leopard seals have been protected from commercial hunting due to their inaccessibility and the high cost of operating in the area. All killing of seals in the Antarctic region is regulated by the Antarctic Treaty and the Convention for the Conservation of Antarctic Seals (CCAS).