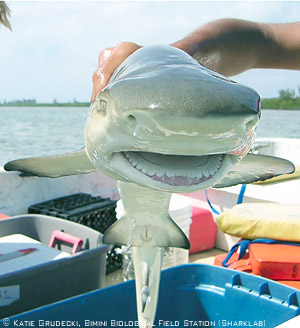 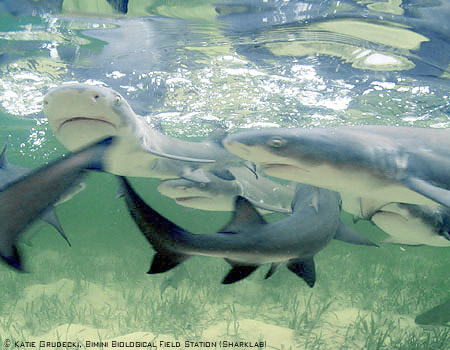 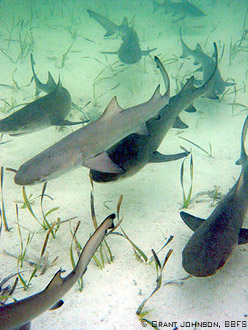 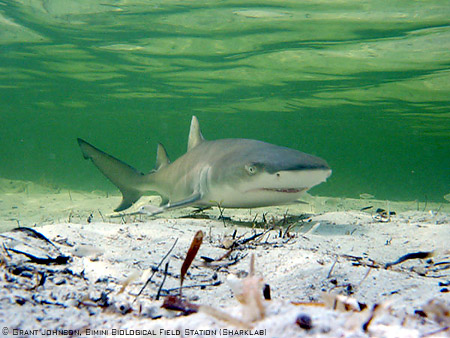 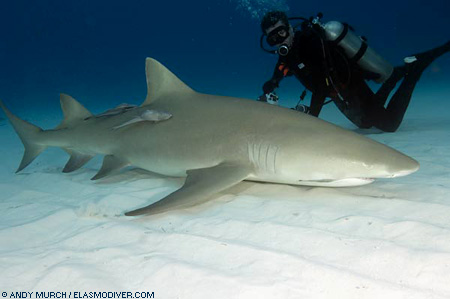 Lemon sharks, Negaprion brevirostris (Poey, 1868), are named for their pale yellow to brown coloring on their dorsal (upper) sides and a lighter yellow on their ventral (lower) sides. The body of the lemon shark is large and robust and commonly reaches lengths between 2.4-3 m with a maximum of 3.2-3.5 m. The growth rate of the lemon shark is 0.54 cm per year.

Lemon sharks, Negaprion brevirostris, inhabit coastal inshore northwest Atlantic waters from New Jersey in the US to Southern Brazil and the Gulf of Mexico and Caribbean. It is thought that the latter two regions are two separate populations. Lemon sharks can be found along the coasts of Senegal and Ivory Coast in the eastern Atlantic. In the North Pacific, lemon sharks range from the Gulf of California and Baja California south to Ecuador.

Lemon sharks are commonly found in subtropical shallow waters to depths of about 92 m near coral reefs, mangroves, enclosed bays, and sounds and river mouths, although lemon sharks do not seem to travel far into fresh water. They can be found in open water during migrations, but overall they tend to stay along the continental and insular shelves. This species is known to form groups based on size and sex and have been observed in groups near docks and fishing piers at night, returning to deeper water during the day.

The lemon shark, Negaprion brevirostris, is placentally viviparous, meaning females form a placenta-like connection with each of the developing fetuses and eventually give birth to live free-swimming pups. Females and males reach sexual maturity at 6-7 years of age or at 2.4 m and 2.24 m respectively. Mating takes place in the springtime in shallow water followed by a 10-12 month gestation period. Females return to shallow nursing grounds between April-September to give birth to 4-17 pups that measure between 60-65 cm. Pups remain in the nursing grounds for several years, their range expanding as they grow.

Lemon sharks are hunted both commercially and recreationally. US longline fisheries target lemon sharks and they are also caught as bycatch in pelagic and gillnet fisheries. Their fins are sold for shark fin soup, and their skin is sold for leather. Lemon sharks are also sold for their meat. Populations in the western north Atlantic and eastern Pacific Ocean are declining due to overfishing.

Lemon sharks are potentially dangerous to humans, however the International Shark Attack File has only reported 10 unprovoked bites by lemon sharks, all of which occurred in Florida and the Caribbean. None of the bites were fatal. Lemon sharks do well in captivity and experiments on lemon sharks have shown they learn as quickly as some mammals and remember things for at least 6 months without reinforcement.

Negaprion brevirostris is listed as Near Threatened (NT) on the IUCN Red List of Threatened Species: