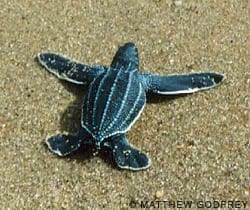 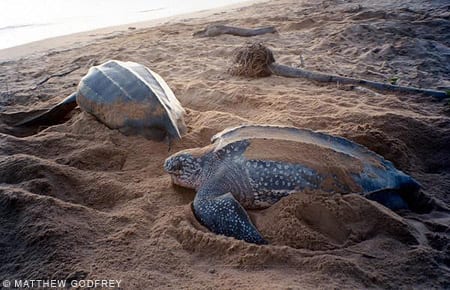 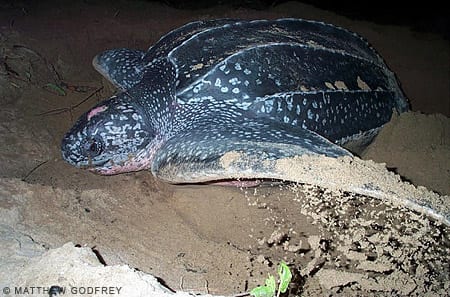 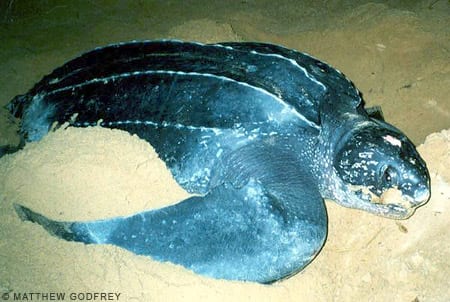 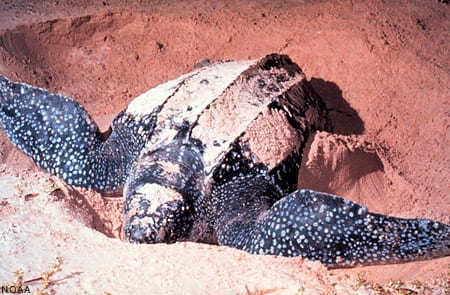 Leatherback sea turtles, Dermochelys coriacea (Vandelli, 1761), aka leathery turtle, luth and trunkback turtle, are the largest of the sea turtles reaching up to 2.4 m in length and weighing 227-907 kg. Their flippers span an average of 2.7 m from the tip to tip. The “shell” of the leatherback is actually its bones underneath its firm dark brown or black skin which has seven pronounced vertical ridges on its back and five ridges on its ventral side. A tooth-like cusp is located on each side of the upper jaw; the lower jaw is hooked anteriorly.

Sea turtles live in almost every ocean of the world. Their smooth shells and paddle-like flippers help them speed through the water as fast as 24 kph. These long-distance travelers have been known to swim up to 4,828 km.

The leatherback can dive to great depths. Turtles equipped with depth recorders dove to over 1,000 m deep. This depth exceeds that reported for any air-breathing vertebrate with the possible exceptions of sperm whales and elephant seals. The shallowest dives occurred at dusk and the deepest at dawn. These leatherbacks were probably feeding on jellyfish that concentrate below 600 m during the day and move into surface waters at dusk. The turtles dove almost continuously with only brief intervals at the surface to breathe.


Leatherback sea turtles can be found in tropical and temperate seas in the Atlantic, Pacific and Indian Oceans. Their range is as far north as British Columbia, Newfoundland and the British Isles, and as far south as Australia, Cape of Good Hope, and Argentina. The leatherback is the most migratory of all sea turtles.

Why Leatherback Turtles Linger in South Pacific Gyre, and Why It Matters

It is estimated that leatherbacks reach sexual maturity between 6-10 years of age. Although leatherbacks move swiftly in the ocean, they are slow and defenseless on land. Male sea turtles almost never leave the water. Adult females require sandy nesting beaches backed with vegetation and with proximity to deep water and generally rough seas. Like other sea turtle species, leatherback females are fertilized at sea then leave the water at night to dig their nests where they deposit between 70-80 eggs. Incubation takes from 55-75 days, and their eggs hatch at night to avoid predation during the hatchling’s return to the sea. It is estimated that 26,000-43,000 females nest annually worldwide—a decline of more than half since 1980. Exponential declines in leatherback nesting have occurred along the Pacific coasts of Mexico and Costa Rica. The leatherback nesting population in Mexico, once the world’s largest at 65% of the global nesting population, is now less than 1% of what it was in 1980. The largest nesting populations now occur in the western Atlantic in French Guiana (4,500-7,500/year) and Colombia (3,000/year). The 2nd largest nesting populations are now found in the western Pacific in Indonesia (about 600-650/year). In the United States, small nesting populations occur on the Florida east coast (35 females/year), in the U.S. Virgin Islands (50-100 females/year), and in Puerto Rico (30-90 females/year). In the U.S., nesting occurs from March-July during which time females will nest 5-7 times with an observed maximum of 11 nests. The average interesting interval is about 9-10 days. Most leatherbacks remigrate to their nesting beaches at 2 to 3-year intervals.

The many factors threatening leatherbacks’ survival include longline fishing, driftnet fishing, coastal development, disorientation of hatchlings by beachfront lighting, egg predation by humans, pollution and watercraft strikes. To try to prevent the extinction of leatherbacks, nature reserves have been established in some nesting areas and, in some of those areas, scientists have taken their eggs into captive breeding programs.

Like other sea turtles, the meat of leatherbacks can be toxic to humans and other animals.

“The main threats have been a prolonged harvest of eggs and the incidental capture in oceanic fisheries. In some areas the egg harvest and illegal poaching has removed more than 95% of the clutches, and this has been recognized as the main cause for the collapse in the Malaysia population (Chan and Liew 1996). Fishing activities using longline and driftnets are an important threat since juveniles and adults are captured in migratory routes (Zug and Parham 1996). In some areas females are killed on the nesting beaches for oil extraction. Leatherback hunts, which have been stripped of their traditional customs and controls, are also serious threats (Suarez and Starbird 1996). Oceanic pollution, basically by plastics is another cause of mortality. Phthalates, derived from plastics have been found in the leatherback egg yolk (Juarez-Ceron 1998).”

“Extraction of sea turtles and their products has become illegal in most countries. In many, there are conservation programmes to protect egg clutches and nesting females from poaching. International trade of all sea turtle products and sub-products is forbidden under CITES. However, the use of the Leatherback meat, oil or eggs is allowed in some nations, as part of internal traditional customs or rituals. While many international instruments (CMS, CBD, SPAW to name a few) require the protection of sea turtles in international waters, lack of effective monitoring in pelagic fishing operations still causes significant bycatch mortality. As an unprecedented action, the United States government recently closed a very large area in the northern Pacific to the US longline fishery in order to protect leatherbacks from incidental capture.”

“Because of the decline in the world’s populations of the leatherback turtle, full protection of all nesting beaches to eliminate poaching, avoid degradation of critical habitat, and increment hatchling recruitment (through enhancing hatching success and incrementing the number of nesting protection programs) will be necessary. However, as pointed out by Sarti et al. (1996) and Spotila et al. (2000) recovery of this population cannot be achieved by increasing hatchling production alone because of the very high mortalities as fisheries’ bycatch. Due to the very drastic observed population declines in last few decades, pelagic and coastal fishing practices that impact leatherbacks must be changed or eliminated urgently to minimize leatherback mortality in these habitats. Further, because the migratory routes of leatherbacks cross territorial waters of many nations or occur in the high seas, international collaboration focused on sea turtle conservation is essential. In regions such as the Caribbean, where populations are shared and the dynamic nature of the nesting habitats provokes shifts in nesting sites, greater collaboration and data sharing will be necessary to derive a better understanding of population sizes and trends.”