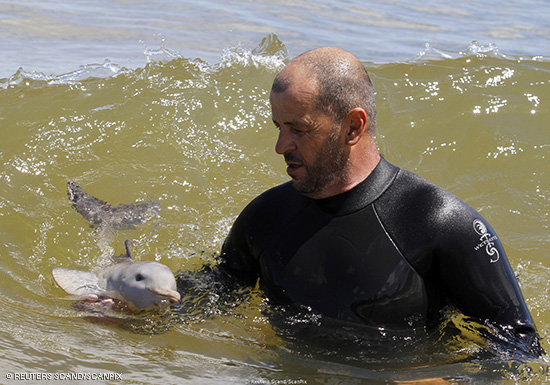 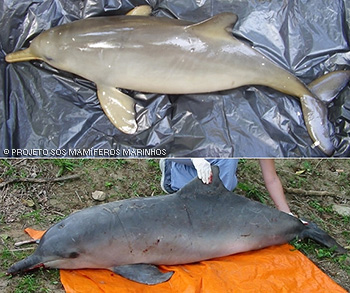 La plata dolphins, Pontoporia blainvillei (Gervais and d’Orbigny, 1844), aka la plata river dolphins, franciscana or the silver dolphins and Delphinus blainvillei (Gervais & d’Orbigny, 1844), Pontoporia (Stenodelphis) blainvillei (Fraser, in Norman & Fraser, 1938), Pontoporia blainvillii (Gray, 1846), Pontoporia tenuirostris (Malm, 1871), and Stenodelphis blainvillei (d’Orbigny & Gervais, 1847), are small dolphins measuring about 1.8 m and weighing 36-50 kg. They have a stocky, rounded body that narrows to a wide neck with unfused vertebrae that allow this species neck mobility. They are gray-brown in color on the dorsal side and lighter brown on the ventral side. They grow lighter as they age, so light that they have been called “white ghosts” by fishermen. La plata dolphins have a distinct dorsal fin and broad flippers that are rounded at the tips. The small flukes are curved and notched.

The longevity of the la plata dolphin is estimated at 15-20 years.

La plata dolphins, Pontoporia blainvillei, are found in shallow coastal waters of Uruguay, Argentina, and Brazil from the Valdes Peninsula in Argentina north to the Rio Grande and Sul River near Rio de Janeiro.

They are not gregarious dolphins, most commonly found alone or in small groups. They are difficult to spot, however they have been known to approach boats where they are identified by their long beaks.

Male la plata dolphins reach sexual maturity between 2-3 years of age or when they grow to 1.3 m, females when they grow to 1.4 m. Calves are born between October and January following a 10.5 month gestation period. They measure about 70 cm long weigh 7-9 kg at birth.

Pontoporia blainvillei are at-risk of being caught in shark nets and it is estimated that about 1,500 of these dolphins are killed each year. Estimates taken from aerial surveys put the population of la plata dolphins at about 40,000 off the coasts of Brazil and Uruguay.