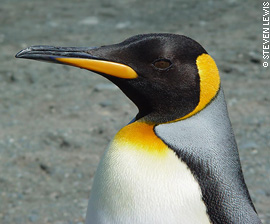 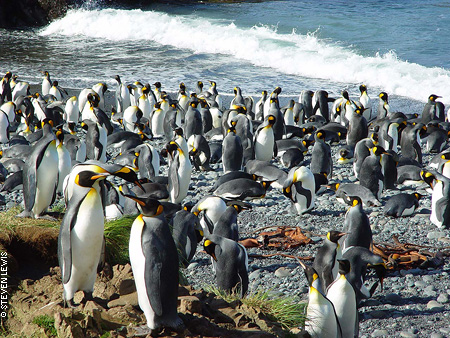 King penguins, Aptenodytes patagonicus, are the second largest penguins after emperor penguins. Kings are sometimes confused with emperor penguins though the king penguin’s range is far to the north of the emperor’s habitat in Antarctica. King penguins stand about 90 cm tall and weigh about 15 kg. They have the classic tuxedo coloring with black backs and white bellies. Kings are also characterized by their bright orange ear patches.


King penguins, Aptenodytes patagonicus, can be found around the Oceanic Islands in sub-Antarctic and temperate waters. Their breeding grounds include Tierra del Fuego, the Falklands, Crozet and the islands southeast of Australia and southwest of New Zealand.

King penguins feed on small fish and squid during dives that average 10-20 m during the summer months. In winter, king penguins must forage deeper in the ocean and during this time foraging dives last from 5 minutes to over 1.5 hours. They are infrequent feeders, foraging every 2 weeks. In between foraging trips, king penguins can lose up to half their body weight.

Breeding behavior of the Aptenodytes patagonicus is heralded by the trumpet-like song of the male, who also exhibits a variety of courting behaviors such as extending the head up, throwing the head back and bowing to attract a female. Females lay their eggs during the summer months and males and females alternate incubating. Like the emperor penguin, king penguins do not build nests; they incubate the eggs by carrying them on top of the feet under the belly. This species will raise 2 chicks only every 3 years because of the long brooding period that lasts about a year.

King penguins have been hunted for eggs, blubber, oil and feathers. Commercial hunting for king penguins is now banned, therefore the population is increasing and is estimated with a population of possibly 2 million pairs.