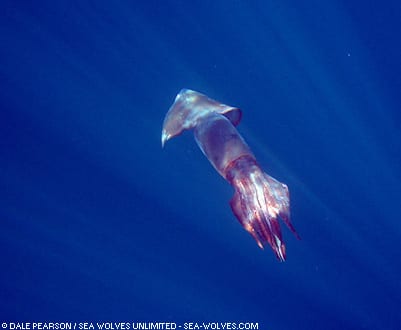 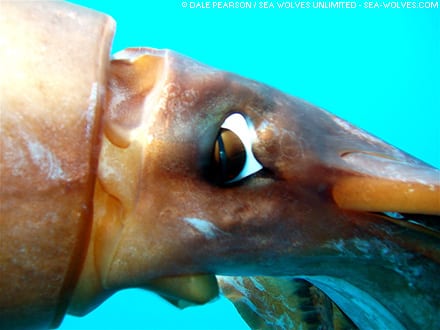 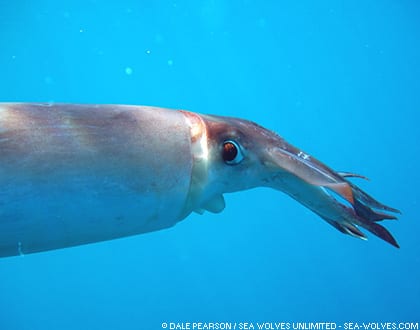 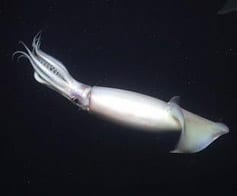 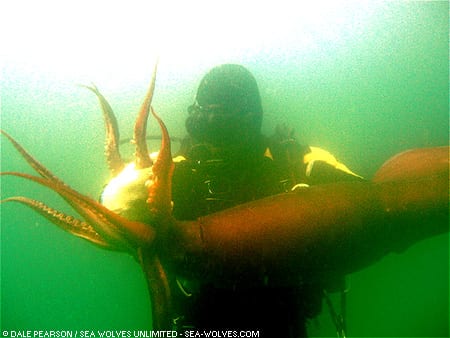 Jumbo squid are members of the flying squid family, Ommastrephidae, and are known to actually eject themselves out of the sea to avoid predators. Jumbo squid are large impressive squid (actually of average size considering all squid species) that can reach up to 2 m in length and weigh up to 45 kg. They have a large, tough, thick-walled mantle and long arms with 100-200 powerful hooked suckers on each and lightning-fast tentacles. These elusive and mysterious creatures are aggressive predators, which has earned them the nickname “red devils” or “diablos rojos” (from Mexican shrimpers who fish for jumbo squid during the shrimping off-season). This name comes from their red hue when hooked, which is used as camouflage from predators in deep waters where most animals cannot see the color red. Like other cephalopods, they are equipped with chromatophores and are able to change color and flash light to communicate. They also have the ability to squirt ink as a defense mechanism.

Jumbo squid can swim at speeds up to 24 kph rivaling some of the fastest swimmers in the ocean.


Jumbo squid, Dosidicus gigas, can be found at depths between 200-700 meters in the waters of the eastern Pacific from Tierra del Fuego north to California. One of their common names, Humboldt squid, is taken from the Humboldt Current, which occurs off the coast of South America and is part of this species’ habitat.

It is important to note that jumbo squid populations have been increasingly migrating farther north than their normal range, in some cases as far north as Alaska. This is of concern to scientists who fear that increased ocean temperatures possibly due to global warming are to blame and/or perhaps overfishing of the jumbo squid’s predators, which has allowed them to expand their range. Predators include swordfish, sharks, porpoises, blue marlin, Makaira mazara, sperm whales, Physeter catodon, Juan Fernandez fur seals, Arctocephalus philippii and Guadalupe fur seals, Arctocephalus townsendi.

Jumbo squid are a social species often found traveling in schools of 1,200 or more individuals.

Jumbo squid, Dosidicus gigas, surface at night to feed on lanternfish, mackerels, sardines, shrimp, and other cephalopods. These aggressive predators use powerful arms and barbed suckers to pull prey toward their razor sharp beaks.

Little is known about the reproductive habits of the elusive jumbo squid because it is likely that they spawn at great depths. It is known that the life span of this species is about one year and that they typically breed just once during their lifespan given that, like other cephalopods, jumbo squid are believed to die after spawning.

Exploratory commercial fishing for Dosidicus gigas began in the 1970s off the Pacific coast of America. This species is now heavily fished off the coast of Mexico where catches increased from 14 tons per year in 1974 to over 19,000 tons in 1980. Since then, catches average under 10,000 tons annually. Because the jumbo squid preys on lanternfishes, commercial fisheries often use lights to lure the squid to the bait. This species is commercially fished to use as bait and is consumed canned in some markets.