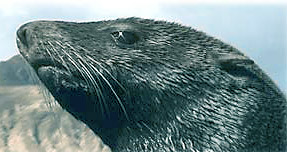 Juan Fernandez fur seals, Arctocephalus philippii (Peters, 1866), are a small seal species, adult males measuring 1.5-2.1 m in length and weighing about 140 kg, while the smaller adult females measure about 1.4 m in length and weigh about 50 kg. It is thought that males may live over 13 years while females may live up to 23 years. This species was considered extinct until it was rediscovered in 1965, although its population still remains low.


The Juan Fernández fur seal is found near isolated rocks and small islands off the coast of Chile in the Juan Fernández and San Félix/San Ambrosio island chain. Between 10-15 adult and juvenile males have been seen hauling out at Punta San Juan on the Chilean mainland in autumn and winter, and individuals may wander as far north as the Peruvian coast. The total population is currently estimated at 12,000.

Relative to other seal species, Juan Fernández fur seals have a narrow range of prey consisting primarily of myctophids (lanternfishes) and squid. This is likely due to the availability of food rather than specialization. They are not a deep diving species. Females dive to an average of only 12.3 m.

Little is known about the Juan Fernández fur seal behavior. It is known that the breeding habits of this species differs from other seal species. Pupping usually occurs in November-December followed by mating about a week later. Breeding occurs on rocky sites, however adult males fight for territory on land, as is typical for fur seals, and on the shoreline and in the water. This use of aquatic breeding territories is not seen in other eared seals. Females use the water to cool their bodies during the hottest parts of the day, and males will abandon their territories for the water for up to 45 minutes at a time to cool off.

Pups are born 65-70 cm in length and weigh 6-7 kg. The male pups are often slightly longer and heavier than female pups.

About 11 days after giving birth and mating, the mother leaves her pup and returns to the sea to feed. This begins the feeding cycle which lasts for 7-10 months with feeding trips lasting about 12 days followed by 5 days nursing. The lengths of these feeding trips are exceptionally long for a fur seal.

Centuries ago, the first sailors to encounter these seals in the Juan Fernández Islands reported extremely large numbers of these seals. Unfortunately, the species was very heavily exploited for its pelt, blubber, meat, and oil between the 17th-19th centuries and by the beginning of the 20th century it was believed to be extinct.

In 1978, the species was given total protection by national Chilean legislation. It remains listed as Near Threatened on the IUCN Red List, due to its limited population size and the resulting species’ low genetic diversity. It is listed as an Appendix II species under CITES. The IUCN/SSC Specialist group has recommended that research be carried out into the diet of the species in order to determine if there is any potential competition with fisheries. Entanglement in fishing nets and plastic debris is also observed as a problem for this species.