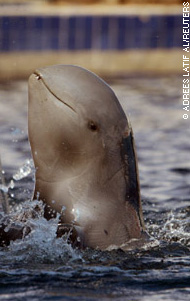 Irrawaddy dolphins, Orcaella brevirostris (Owen in Gray, 1866), aka Mekong or Mahakam River dolphin, reach 2-2.75 m in length. The color of Irrawaddy dolphins is dark blue to dark gray ranging to pale gray, with a pale ventral (under) side. They have a high rounded forehead and no beak. Their U-shaped blowhole is located to the left of the midline on their dorsal (upper) side and opens to the front, unlike other species. They have a small, blunt, rounded triangular dorsal fin and large flippers. Like other river dolphins their neck is highly flexible, which enables them to forage in shallow water. They have narrow, pointed, peg-like teeth about 1 cm in length in both their upper and lower jaws. Two unique anatomical features of Irrawaddy dolphins are that they do not have a cardiac sphincter and the stomach is subdivided into compartments. They are not acrobatic dolphins and are not known to bowride; however they have been observed leaping from the water.

Irrawaddy dolphins dive for an average of 30-60 seconds but longer dives have been recorded of up to 12 minutes. Although they are generally slow swimmers, a swim rate of 25 kph was recorded for one individual. This species is usually seen in small groups consisting of <6 animals, but groups of between 10-15 have been reported. This species spends most of their time feeding. They display a unique behavior of expelling a stream of water up to 1.5 m which is thought to be used to herd fish. Fishermen have reported Irrawaddy river dolphins stunning large fish then playing with them before they eat them.

Irrawaddy dolphins are not thought to communicate through vocal signals.

Irrawaddy dolphins, Orcaella brevirostris, are found in the coastal waters and large rivers of Southeast Asia, Northern Australia, and Papua New Guinea. They prefer coastal, brackish, and freshwater of the tropical and sub-tropical Indo-Pacific.

Little is known about the reproductive habits of Irrawaddy dolphins. It is thought that they reach sexual maturity when they are around 4-6 years old. Their mating season is believed to occur between April-June in the Semayang Lake/Mahakam River area of Kalimantan, Indonesia, based on the birth of calves born in captivity in Jakarta between July-December. Their gestation period is estimated at about 14 months. Newborns measured following birth in captivity were 96 cm long and weighed 12.3 kg. During their first 7 months, calves increased in length by 57 cm (59%) and in weight by 32.7 kg (266%). One calf was nursed for about 2 years, although it began consuming fish at 6 months.

Irrawaddy dolphins are listed as Endangered (EN A2cd+3cd+4cd): “Irrawaddy Dolphin habitat overlaps strongly with severe threats from growing human activities. The primary factor responsible for population declines in both their freshwater and marine habitat is incidental mortality in small-scale fisheries, especially gillnets. Habitat loss and degradation is also a major contributing threat in many freshwater areas, especially from existing and planned dams in the Mekong and Ayeyarwady rivers, and in coastal estuarine habitat from declining freshwater flows, increasing commercial vessel traffic and pollution. Rigorous data on annual mortality needed to distinguish between VU and EN listings (4.4% and 5.0%, respectively) are not available and, with the exception of a few well studied subpopulations, the data are unlikely to become available in the foreseeable future. However, it is probable that the high mortality and small size of the studied populations will be found to apply to those areas where data are currently non-existent or limited. The severity and pervasiveness of the primary threats give reason to suspect that an EN listing is appropriate according to a population size reduction of ≥50% over the past 60 years, future 60 years, and a time period encompassing 60 years in both the past and the future. Considering the strong evidence that fatal entanglements in fishing gear will only increase in the future along with increasing fishing effort from small-scale fisheries; alternative fishing techniques for replacing gillnets while meeting local fishery needs are not available; and dam construction and coastal development in priority Irrawaddy dolphin habitat are increasing in both magnitude and range, the case for a ≥50% reduction in the next 60 years is particularly compelling.”

Like Indus river dolphins, Irrawaddy dolphins are affected by human activity including pollution and the construction of barrages or dams, and silt build up. They have also been caught in anti-shark gillnets in Australia and have become entangled in fishing gear in other areas.