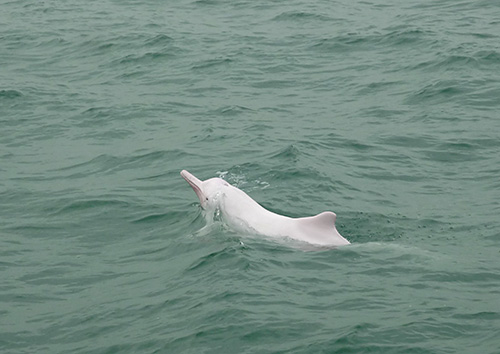 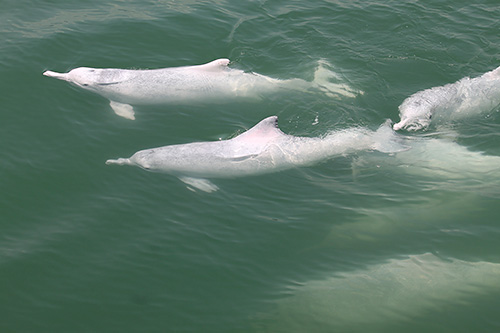 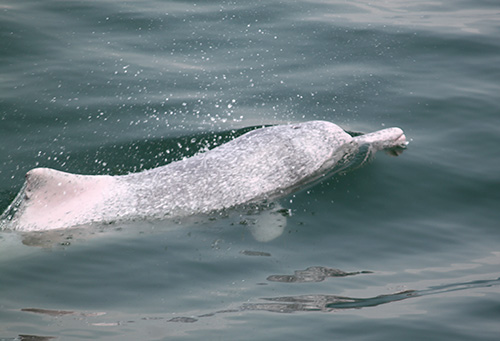 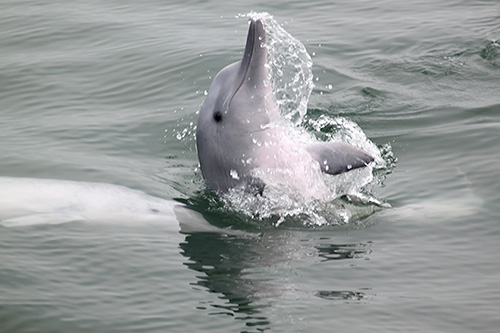 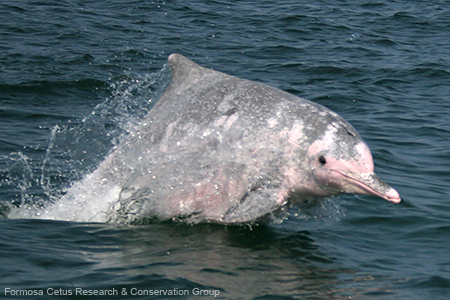 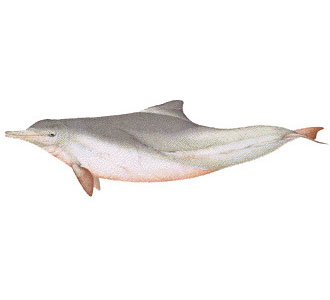 Indo-Pacific hump-backed dolphins, Sousa chinensis (Osbeck, 1765), aka Chinese white dolphins, Pacific humpback dolphins and pink dolphins, are characterized by a stocky body and long, well-defined beaks. They are named for their dorsal fin that, in most populations, sits on a hump that is more pronounced in males. Some of these dolphins also have distinctive ridges along their tail stocks (the area just in front of their flukes), particularly males. Males reach a maximum of 3.2 m in length, females 2.5 m, and adults weigh up to 284 kg. This species varies in color by age and region. Some are light in color when they are born, darkening to a dark gray on their dorsal (upper) sides, light gray on their ventral (under) sides. In the western Indian Ocean and off the coast of China, calves are born with dark coloring that lightens with age to a pink-tinted white color with spotted patterns. Indo-Pacific hump-backed dolphins near Malaysia and northern Australia, however, are nearly white. This species has 29-38 peg-like teeth in their upper and lower jaws.

Indo-Pacific hump-backed dolphins travel in schools or pods of <10, although some schools have been observed with up to 30 dolphins. Some schools observed off the coast of South Africa appeared stable. Also off South Africa, schools of Indo-Pacific hump-backed dolphins appear to prefer sandy bays for resting and socializing and open rocky coastline for foraging. These dolphins are moderately acrobatic slow swimmers (average 4.8 kph) and are rarely seen bow riding. In spite of their slow swim speed, they have been known to chase off or even kill sharks.

Indo-Pacific hump-backed dolphins, Sousa chinensis, are found in tropical and temperate coastal waters of the Indian and Pacific Oceans from northern Australia and southern China in the east, through Indonesia, and around the coastal rim of the Indian Ocean to southern Africa. They are known to enter rivers, estuaries, and mangroves, particularly the latter. They prefer shallow waters <20 m in depth with warm temperatures between 15-36°C.

Indo-Pacific hump-backed dolphins feed near the shore on estuarine and reef fish, mollusks, and crustaceans. They tend to hunt in small groups using echolocation to find prey, although they have been observed hunting individually. They usually hunt as a group, however they feed singly. This dolphin is considered to be a gregarious species, but they are also known to be aggressive, particularly when feeding.

Indo-Pacific hump-backed dolphin appear to breed year round and calves are generally born during summer months between December-February. Mating behaviors are thought to include chasing each other in circles at higher speeds, swimming on one side while waving a flipper in the air, and somersaulting.

Some Indo-Pacific hump-backed dolphins, particularly in the northwest Indian Ocean, have been hunted for human consumption and oil. Entanglement in fishing gear and being caught as bycatch pose a threat throughout their range. These dolphins are also caught in anti-shark gillnets off southeast Africa and eastern Australia, which may pose a threat to the sustainability of this species in South Africa. Mangrove degradation due to coastal development may also pose a threat to this species as mangroves are an important part of their habitat.