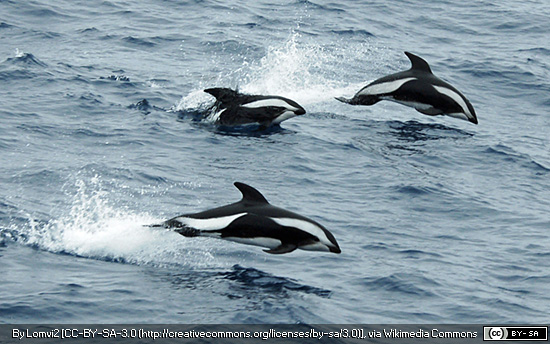 Hourglass dolphins, Lagenorhynchus cruciger (Quoy and Gaimard, 1824), are small cetaceans with stocky bodies and characteristic black and white color patterns resembling an hourglass, hence their common name. These markings vary greatly among individuals. Based on the few records that exist for this species, they reach an average of 1.57 m in length in females, 1.75 m in males. Weight data is also scarce for this species, however the few weighed were between 74-94 kg. They are mostly black in color with 2 white patches. The first patch begins behind their beak, extends over their eyes, widens to the hourglass shape, then tapers at their dorsal fins. The second patch begins mid-flank at their dorsal fins, widens toward their posterior (rear) end, and tapers at their tail. Their ventral (under) surface is mostly white. They have conical teeth, 26-34 teeth in their upper jaws and 27-35 teeth in their lower jaws. This species is the only small cetacean with a dorsal fin found below the Antarctic convergence making them easily distinguishable from other dolphin species there. Above the convergence, they may be confused with dusky and Peale’s dolphins.

Hourglass dolphins are a gregarious species that forms schools or pods of 1-100. Their average school size is 7 individuals. In studies of the social habits of hourglass dolphins, only 3 calves were identified out of a group of 1,634 individuals. This may be due to a winter birthing season when the weather prevents studies from being conducted or due to females protecting their calves by avoiding research vessels. Hourglass dolphins have been observed associating with fin whales, sei whales, minke whales, Arnoux’s beaked whales, southern bottlenose whales, long-finned pilot whales, orca (killer whales), southern right whale dolphins, and there is one sighting of an hourglass dolphin traveling near southern right whales. Lagenorhynchus cruciger has also been observed playing around large whales and appear to enjoy bow riding the waves of these much larger animals. In terms of human interaction, hourglass dolphins enjoy bow riding and traveling with large marine vessels as well.

Hourglass dolphins are found throughout the cold open waters of the Southern Ocean between 43°-67°S and are widely distributed throughout their range. They’re found in waters ranging between -0.3-7°C, although they prefer colder surface temperatures and are most commonly found in waters between 0.1-0.3°C. The warmest recorded surface temperature associated with this species was 13.4°C. It is thought that the hourglass dolphin follows cold-water currents such as the West Wind Drift. In the summer months they are more common in cooler southern waters and in winter they appear to move further north. The farthest northern sighting of the hourglass dolphin was near Chile 33°40’S.

Hourglass dolphins, Lagenorhynchus cruciger, feed primarily on fish, squid, and crustaceans. They have been observed feeding in large groups near the surface, which attracts sea birds and helps research vessels find groups of hourglass dolphins.

The global population of hourglass dolphins, Lagenorhynchus cruciger, is thought to be >140,000. This species is not yet listed as threatened or endangered. They are not hunted commercially and conflicts with fisheries such as entanglement and being caught as bycatch do not pose a great threat due to their remote habitat. There have, however, been reports of entanglement and stranded individuals have been found with net scars.