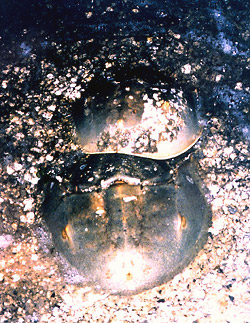 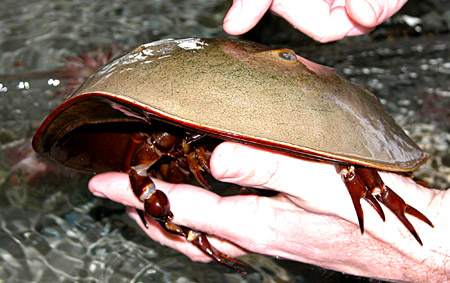 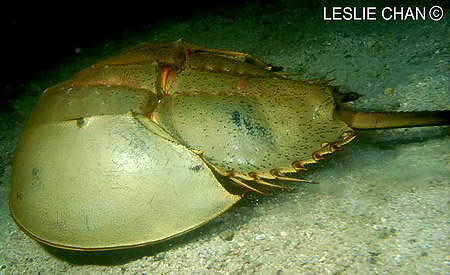 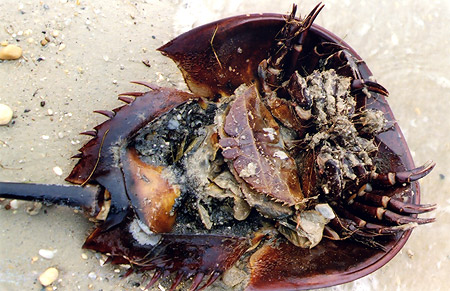 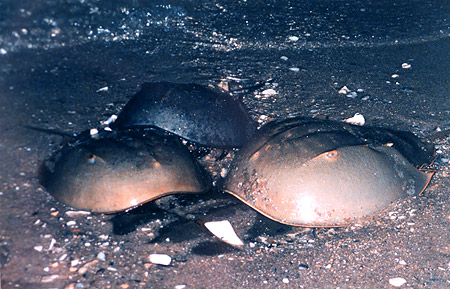 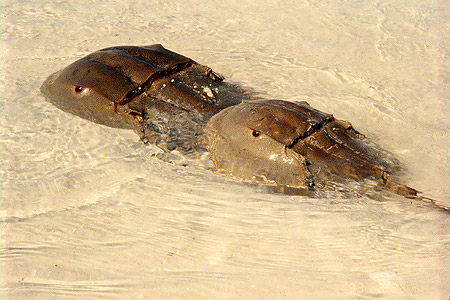 Limulus polyphemus (Linnaeus, 1758), commonly known as horseshoe “crabs” and Limulus albus (Bosc, 1802), Limulus americanus (Leach, 1819), Limulus cyclops (Fabricius, 1793), Limulus occidentalis (Lamarck, 1801), Limulus sowerbii (Leach, 1815), and Monoculus polyphemus (Linnaeus, 1758), were originally classified as a crab erroneously. They are actually a distant relative of crustaceans, and are more closely related to arachnids such as spiders, scorpions and ticks. Although they look prehistoric, and ancient relatives of Limulus polyphemus were present 520 million years ago as evidenced by fossils, this species has only been around for about 20 million years which is not enough time to consider this animal a “living fossil” as they are sometimes called.

Horseshoe crabs are fascinating creatures. They are one of the few animals that has no predators, other than humans who capture horseshoe crabs primarily for bait. A protein found in the blood of horseshoe crabs is used to detect impurities in intravenous medications; the animals are apparently not harmed during blood extraction. Horseshoe crab blood has also been used in cancer therapy research, leukemia diagnosis and to detect vitamin B12 deficiency.

The larger female horseshoe crab can reach up to 60 cm in length and can weigh up to 5 kg. The U- or horseshoe-shaped carapace (shell) is smooth and brown, although in some environments the carapace is covered with epiphytic plants and epizooic animals (organisms which live on the outer surface of other organisms and can grow so much that the carapace is no longer visible). This is usually observed toward the end of the horseshoe crab’s lifespan of approximately 19 years. During its formative years, the horseshoe crab sheds its carapace periodically, or molts, to accommodate its growing body. The new skeleton is flexible so that it can accommodate the increased body size. The new carapace then hardens and its color forms during tanning of its protein component.

The body is divided into an anterior cephalothorax and a posterior abdomen. The spike-shaped tail, or telson, functions as a tool for digging in sand and a lever if the animal finds itself upside down. The tail might not always be effective however. In Delaware, a program known as “Just Flip ‘Em” was established to encourage beachgoers to flip “stuck” horseshoe crabs stranded on the beach during mating season. The horseshoe crab is equipped with 4 pairs of jointed walking legs (pedipalps) each ending in a claw. The fifth pair is larger and allows the animal to lurch forward. The middle segment of each leg is covered with spines used to chew food before it is passed forward and into the mouth located at the base of the legs. Interestingly, locomotion and feeding are closely related, since the animal can chew only when it moves. More on feeding below.

Horseshoe crabs’ respiration is conducted through 6 pairs of appendages attached to the underside of the abdomen called gill books. The first pair, called the operculum, protects the other five pairs, which are respiratory organs and houses the opening of the genital pores through which eggs and sperm are released from the body.


There are 4 species of horseshoe crabs found in the world today. Limulus is the only species found in the Atlantic Ocean. The remaining three are found in SE Asia where the eggs of some species are used for food. In addition to Limulus polyphemus found off the US East Coast from Maine south to the Gulf of Mexico as far as the Yucatan peninsula, the remaining species are:

Horseshoe crabs are omnivorous scavengers, feeding upon small bivalves, mollusks, worms, dead fish and algae. They feed through the mouth located at the base of the legs, which are covered with thick bristles (gnathobases) that point inward used to grind the food as the animal walks.

Food is then pushed into the mouth by the chelicera, which is then passed into the esophagus where it is further ground and passed into the stomach and intestine. Waste is excreted through an anus located on the ventral side in front of the telson (tail).

Sexual maturity is not reached for 9 to 12 years. Mating season for the horseshoe crab takes place during the spring and summer full moons. The male uses the first pair of claws to attach to the female. The female deposits between 2,000 and 30,000 eggs in each nest in the sand and the male then releases sperm to fertilize them. The eggs are 2-3 mm in diameter and are an attraction for migrating birds that time their arrival in the season to feed on Limulus eggs. When the moon is full again, the 1 cm long larvae hatch and crawl from where they are buried in the sand to return to the water. In about 1 year juvenile horseshoe crabs will reach about 4 cm in width.

The History of Limulus and Endotoxin