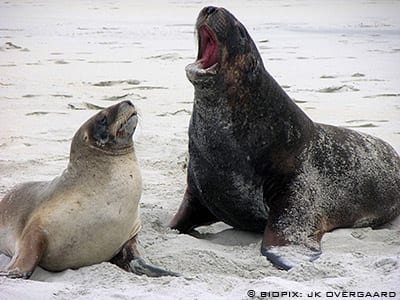 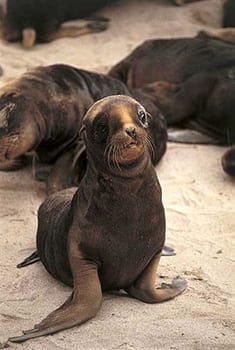 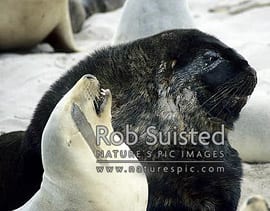 Adult females are a creamy-gray color and males are typically dark brown to black. Males may live as long as 23 years, females as long as 18 years.

Migratory patterns of Hooker’s sea lions are not well known. They are opportunistic feeders with a diet of cephalopods, crabs, crayfish, and fish. Adult sea lions are able to dive repeatedly to 300 m and have been known to dive to over 600 m. They have been known to travel up to 130 km offshore during feeding trips. They will eat penguins and fur seals on occasion, and adult male Hooker’s sea lions have been observed feeding on sea lion pups. Great white sharks and orca (killer whales) prey on adults and pups.

Female Hooker’s sea lions, Phocarctos hookeri, sexually mature at 3-4 years of age, males at 5 years, however males do not begin breeding until at least 8 years of age. Breeding season takes place between November and January. Pups are born measuring 70-100 cm in length, weighing 7.9 kg (females average 7.2 kg). Bulls begin arriving in November to fight for territory before the females arrive a few weeks later. Successful bulls establish territories consisting of between 8-25 females. The females give birth shortly after arriving, then mate a week to ten days later. Pups are born with a thick coat of light to dark brown fur. About 10-14 days after a pup is born, females return to sea to feed, then return to land for 2-3 days to nurse. This feeding cycle continues for about 8-12 months. At 2-3 weeks of age pups begin to swim. Adult males remain ashore and do not normally feed during breeding season. Molting follows breeding season in late February through to early May.

Hooker’s sea lions were hunted for their hide and oil until hunting was banned in New Zealand in 1893. The New Zealand (Hooker’s) sea lion was designated as a Threatened Species under New Zealand’s Marine Mammals Protection Act in August 1997, and is also listed as Vulnerable on the IUCN Red List. A 20 km Marine Mammal Sanctuary was established around the Auckland Islands that conservation groups hope to have extended to 100 km. New Zealand’s subantarctic islands were granted UNESCO “World Heritage” status in 1998.

A major threat to the species is entanglement in trawl fishing nets, particularly the squid trawl fishery. In recent years, squid trawling has been limited due to sea lion mortality. Unfortunately, the limits were exceeded between 1995-97 when an estimated >100 sea lions drowned annually in squid trawl nets. These limits have been enforced more strictly since then, and in 2000, the squid trawling season ended early when the number of sea lions killed reached the maximum of 65. Fishing devices that protect marine mammals are being designed and tested. The New Zealand Department of Conservation is developing a Population Management Plan for the species due to its status as a protected species.

The species is particularly vulnerable because of its limited breeding sites. In 1998 at least 1600, over 53% of the year’s pups, and many adults died of an unknown disease. High juvenile mortality has also been caused by pups getting caught in rabbit burrows, however the Department of Conservation has eliminated the rabbit population, a measure that reduced the problem significantly.