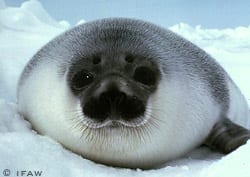 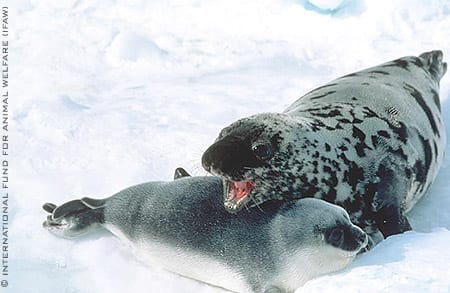 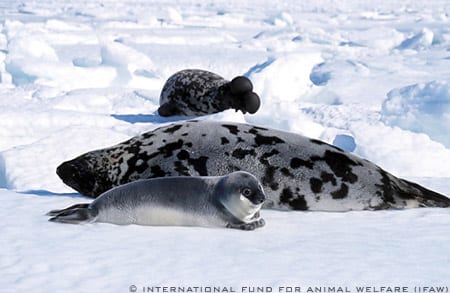 Hooded seals, Cystophora cristata (Erxleben, 1777), aka Cystophora borealis, Phoca cristata, are named for the large elastic sac that extends from their noses to their foreheads that expands into a large balloon-like ball in the adult males. Hooded seals have a black face and a blue-gray coat with patterns of dark patches. Adult males measure an average of 2.5-3 m in length and weigh about 300-400 kg. Adult females are smaller, measuring an average of 2-2.4 m in length and weighing about 160-230 kg. Hooded seals are known to dive repeatedly to over 1,000 m for more than 50 minutes. The life span of the hooded seal is 30-35 years of age.

Hooded seals are very aggressive compared to other seal species. Adult males demonstrate their aggression by inflating their “hood” (balloon-like ball on their face), which can grow to twice the size of a football. The “hood” is an enlargement of the nasal cavity which develops at about 4 years of age. When inflated, the hood forms a balloon on the head, when deflated the hood hangs in front of the upper lip. Males also have an inflatable nasal membrane that expands like a red balloon from one nostril that “pings” when shaken. The hood and membrane are used for aggression display when threatened and as a warning during the breeding season.


Hooded seals are found in deep waters in the far north Atlantic Ocean. This species ranges from Svalbard in the east to the Gulf of St. Lawrence in the west. Four distinct populations can be found on the pack ice: (i) near Jan Mayen Island, (ii) off Labrador and northeastern Newfoundland, (iii) in the Gulf of St. Lawrence, and (iv) in the Davis Strait. The total hooded seal population is currently estimated to be 650,000, consisting of 250,000 in the Jan Mayen population and 400,000 in the northwest Atlantic Ocean. This is a highly migratory species known to wander long distances as far west as Alaska and as far south as the Canary Islands and the Caribbean island of Guadeloupe.

After the breeding season, usually from April-June, these seals travel long distances to feed. In June-August they reunite on the ice to molt after which they disperse to feed until breeding season begins in late winter. Migratory patterns are not yet well documented, however the northwest Atlantic populations appear to molt off the east coast of Greenland in the Denmark Strait then travel north. They are also seen along the coast of western Greenland. Individuals from the Jan Mayen population appear to molt on two sites north of the breeding area then disperse to feed in Svalbard, Iceland, Norway, and the Faroe Islands. The northwest Atlantic populations are thought to winter in waters off Newfoundland.

Female hooded seals mature between 3-6 years, males at 5-7 years. The amount of interchange between the different breeding populations of this highly migratory species is unclear, although a sighting of a harp seal-hooded seal hybrid pup has been reported.

Pups are born between March-April with a well-developed blubber layer and a blue-gray coat, which led to their nickname “blueback”. They will molt this coat in about 14 months. Newborn pups measure about 1 m and they weigh about 24 kg. Nursing only lasts an average of 3.8 days, the shortest lactation period of any mammal. In spite of the short nursing period, the pup doubles in size from about 24 kg to about 47 kg thanks to mother’s rich milk made up of between 60-70% fat. When the females start giving birth, the begin males competing for breeding territory by pushing and fighting each other. Males then wait to mate while the female nurses forming temporary “families” or “triads”. When the pup is weaned, the male and female mate in the water. Several hours after mating, the male returns to the breeding territory in search of another female.

Hooded seals were commonly killed for their pelts, and juvenile “bluebacks” were particularly valued. In 1983, public pressure prompted the European Economic Community to ban the import of blueback products, and Canada has prohibited the commercial hunting of bluebacks since 1987. Unfortunately, illegal killing has continued. Canadian authorities seized 22,846 dead bluebacks following a hunt in 1996, and Canadian sealers are working to have the ban lifted.

Commercial hunting of hooded seals is prohibited in the Gulf of St. Lawrence and in the Davis Strait, although adult hooded seals are still hunted commercially in other areas. Only 200 kills were reported in 1999, far fewer than the Total Allowable Catch (TAC) of 10,000. In spite of the low number reported, it is thought that the actually killing goes unreported by 38-89%. In 1996 the legal limit was 8,000, however the limit was not enforced and 25,000 hooded seals were killed that year. Sealers are pushing to have the TAC raised in spite of the lack of demand.

Public opinion has shown that 50% of Canadians want the east coast seal hunt to end, and that 75% opposed federal subsidization of the hunt. As with the harp seal, without government subsidies there would be no market for seal products.

Hooded seals are hunted in Norway and Russia, however hunting has been reduced in this seal population in recent years due to difficult weather conditions, access to the seals, and poorly maintained sealing vessels. In 1999, only 2 vessels participated in the hunt catching 3,525 non-suckling pups and 921 adult seals. In 2000 these numbers were further reduced to 1,346 non-suckling pups and 525 adults. In spite of these low catches, the quota for the 2001 season was set at 10,300 adult hooded seals. The Norwegian sealing industry is not economically viable and is also dependent on government subsidies.

Native subsistence hunting also accounts each year for about 4,000-6,000 seals in Greenland, and up to 100 seals are hunted by natives in northern Canada.

Hooded seals suffer from entanglement in gillnets in Iceland, Newfoundland, Labrador, and in the northeastern US. Like other seal species, hooded seals have been blamed for reduced fish stocks, and the fishing industry has called for culls.

As with harp and harbor seals, reports show increased numbers of seals in the waters off the northeastern US, including many in need rescue and rehabilitation. This may be due to decreasing prey caused by overfishing causing seals to travel further south for food.