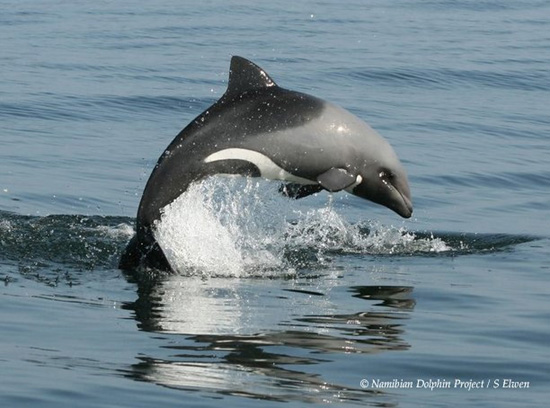 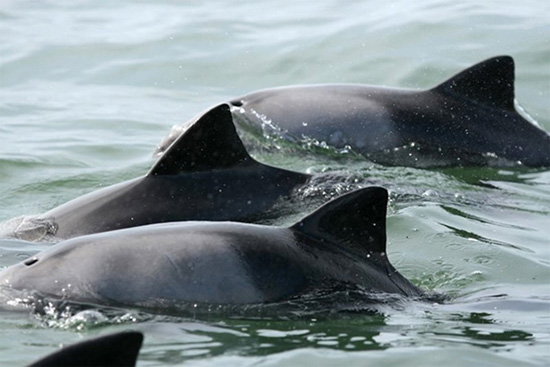 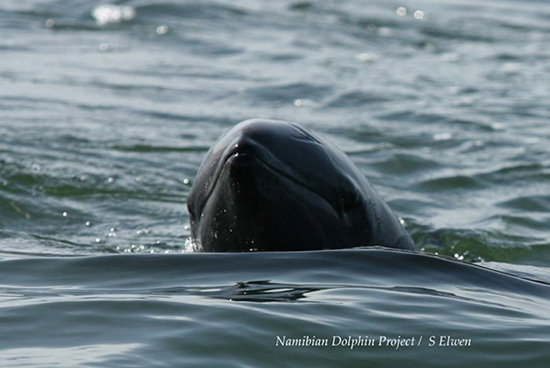 Heaviside’s dolphins, Cephalorhynchus heavisidii (Gray, 1828), aka Haviside’s dolphin, are small cetaceans with blunt heads and robust bodies. Adults reach an average of 1.7 m in length and weigh between 60-70 kg. They do not have beaks and are often mistaken for porpoises. They have round paddle-like flippers are rounded and almost paddle-shaped and a large triangular dorsal fin. The posterior half of the body is solid gray with a dark gray “cape” over the head and throat. The anterior half that covers the dorsal fin, flanks, and tail stock is dark blue-black. There is a transverse band on the ventral surface in front of the pectoral fins, and a triangular marking behind each of the pectoral fins. A longitudinal line is found on the belly that separates into 3 forks beneath the dorsal fin. The dark coloring of the Heaviside’s dolphin is very similar to the orca (killer whales), although these 2 species differ in size and behavior and are therefore distinguishable.

In terms of human interaction, the Heaviside’s dolphin is known as shyer version of its playful counterparts. They do approach boats and bow ride, and they will accompany marine vessels for several hours, although they are thought to have restricted ranges and are not likely to travel far.

Heaviside’s dolphins are found in small groups of 1-10 animals, although pairs or groups of 3 are most common.

Heaviside’s dolphins, Cephalorhynchus heavisidii, are found in coastal waters off the southwest coast of Africa from northern Namibia (17°09’S) south to Cape Point in Cape Province (34°21’S). Although Heaviside’s dolphins are not thought to be rare, they are not abundant throughout their range, which is limited to about 1,600 km along the African coastline.

Heaviside’s dolphins prefer shallow coastal waters <100 m deep within 8-10 km of the shore. Population density surveys have within 8 km of the coast have shown low population densities of around 5 sightings per 160 km. This species appears to prefer the cold waters of the Benguela Current, and some populations do not migrate from this area. Although they have been sighted in waters ranging from 9-19°C most sightings indicate a preference of slightly cooler water between 9-15°C.

Other than studies indicating that some Heaviside’s dolphins appear to inhabit the same area year round, overall migratory patterns of this species in not well-known. A satellite-tagged juvenile male traveled about 158 km north of where he was tagged.

Heaviside’s dolphin, Cephalorhynchus heavisidii, primarily feed on fish such as hake, kingfish, and gobies. Octopus and squid are also a part of their diet. In a study of the stomach contents from 17 Heaviside’s dolphins, a total of 4,928 different food items were identified.

No data are available on the reproductive habits of Heaviside’s dolphins, Cephalorhynchus heavisidii.

Like most other dolphin species, entanglement in fishing gear poses a threat to the Heaviside’s dolphin, particularly inshore fishing nets off South Africa and Namibia each year, and small numbers may be taken with hand-held harpoons or rifles for human consumption. Up to 7 dolphins have been reported entangled in one net haul.

More data is needed on the Angola, Namibia, and South Africa populations to determine the population numbers and range of the Heaviside’s dolphin. This data may also be used to assess the risk of threats to its sustainability such as overfishing of Heaviside’s dolphin prey and increased commercial fishing in its range.