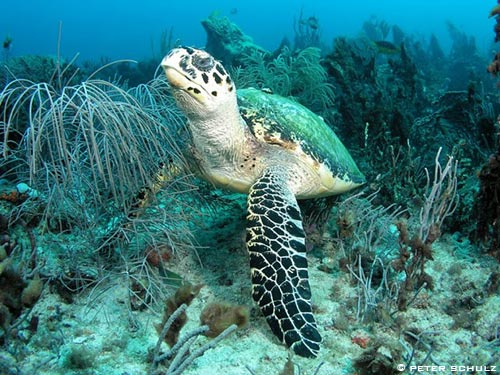 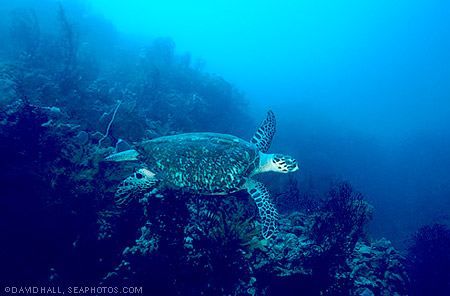 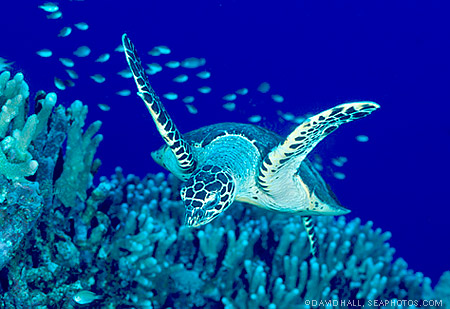 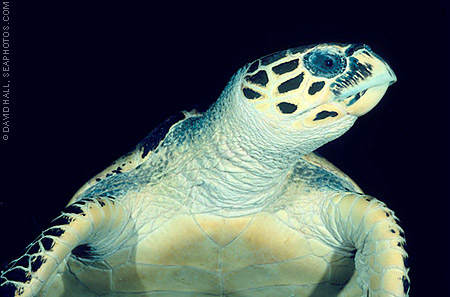 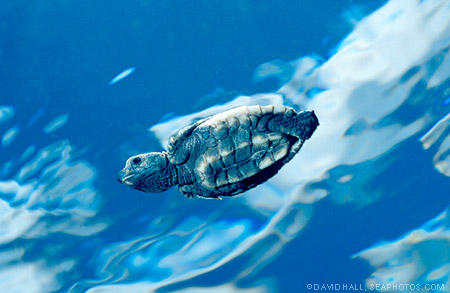 Hawksbill sea turtles, Eretmochelys imbricata (Linnaeus, 1766), are beautiful small to medium-sized sea turtles that take their species name (imbricata) from the overlapping plates on their upper shell. Hawksbills get their common name from the shape of its hooked jaw. They reach a length of about 0.62-1.14 m.

In the U.S. Caribbean, nesting females average about 0.62-0.94 m in straight carapace length. Weight is typically to 80 kg in the wider Caribbean, with a record weight of 127 kg. Hatchlings average about 42 mm straight carapace length and range in weight from 13.5-19.5 g. The following characteristics distinguish the hawksbill from other sea turtles: two pairs of prefrontal scales; thick, posteriorly overlapping scutes (plates) on the carapace; four pairs of coastal scutes; two claws on each flipper; and a beak-like mouth. The carapace is heart-shaped in very young turtles, and becomes more elongate or subovate with maturity.

Its lateral and posterior margins are sharply serrated in all but very old individuals. The epidermal scutes that overlay the bones of the shell are the shells sold commercially. They are unusually thick and overlap posteriorly on the carapace in all but hatchlings and very old individuals. Carpacial scutes are often richly patterned with irregularly radiating streaks of brown or black on an amber background. The scutes of the plastron of Atlantic hawksbills are usually clear yellow, with little or no dark pigmentation. The soft skin on the ventral side is cream or yellow and may be pinkish-orange in mature individuals. The scales of the head and forelimbs are dark brown or black with sharply defined yellow borders. There are typically four pairs of inframarginal scales. The head is elongate and tapers sharply to a point. The lower jaw is V-shaped.

Eretmochelys imbricata have 5 features that distinguish them from other sea turtles. Their heads have two pairs of prefrontal scales. They also have two claws on each of their forelimbs. There are thick, overlapping scutes on their carapaces, which also have four pairs of costal scutes. Their elongate mouths resemble a beak, that taper off to a sharp point at the end.

Male turtles are distinguished by a brighter pigmentation, a concave plastron, long claws and a thicker tail.

Sea turtles are some of the largest turtles in the world and live in almost every ocean of the world. Their smooth shells and paddlelike flippers help them speed through the water as fast as 24 kph. These long-distance travelers have been known to swim up to 4,828 km.

Eretmochelys imbricata, or hawksbill sea turtles, are found mainly in the tropical regions of the Atlantic and Pacific oceans. In the western hemisphere, they have been reported to have nests as far north as Woods Hole, Massachusetts and are also present in the Long Island Sound. However, between the Carolinas and New Jersey, very few hawksbill turtles have been recorded.

Also found around the Oceanic Islands and Indian Ocean. Hawksbill turtles are most commonly found in coral reef habitats where sponges, a food source for hawksbills, grow on solid substrate. They also reside in shoals, lagoons of oceanic islands and on continental shelves. They are most commonly found in water 18.3 m or shallower. The habitats of hawksbills vary by stages in their life cycle. Young hawksbill turtles cannot dive into deep water and therefore live on masses of floating sea plants, such as sargassum. Hawksbills re-enter coastal waters when they reach approximately 20-25 cm carapace length. The ledges and caves of the reef provide shelter for resting both during the day and night. Hawksbills are also found around rocky outcrops and high energy shoals, which are also optimum sites for sponge growth. In areas where there are no coral reefs, hawksbills are found in mangrove-fringed bays and estuaries. In Texas, juvenile hawksbills are also found near stone jetties.

Hawksbill sea turtles are omnivorous with a diet that consists primarily of sponges. They are selective feeders choosing only certain species of sponges of which are toxic to other animals. Sea jellies and other coelenterates are also common prey for hawksbill turtles. They also eat mollusks, fish, marine algae, crustaceans and other sea plants and animals. A preferred feeding ground of the hawksbills is in shallow shoals abundant with brown algae.

The actual age that hawksbill sea turtles reach sexual maturity is unknown. Mating occurs roughly every 2-3 years mainly in shallow waters. Copulation usually begins near the shore. Hawksbills leave the water only during the breeding season when females dig nests in the sand, typically near vegetation. The entire nesting process takes 1-3 hours. They clear the area and dig a pit in the sand. They lay their eggs in the pit then fill it with sand using their hind limbs. After the eggs are laid and buried, they immediately return to the sea.

Like all turtles, the hard carapace of hawksbills discourages predators. Adult turtles are still consumed by humans, sharks and occasionally crocodiles. Nests are commonly robbed by terrestrial predators such as dogs, raccoons, rats, mongooses and humans. Directly after hatching, hawksbill turtles make the journey to water. Although this trip only takes a few minutes, many hatchlings are preyed upon by various gulls, herons and large crabs.

The eggs of hawksbill sea turtles were once a popular food for humans as was the meat, however the sale and consumption of turtle eggs is now illegal and the meat was found to be frequently poisonous to humans. The skin of these turtles is also toxic to humans. The sale of hawksbill turtle shells is also illegal.

More than 50% of sea turtle eggs are stolen by humans, which has lead to a decrease in turtle populations worldwide which face a serious threat of extinction. A status that has not changed since 1970. As of 1983, the only known stable populations of hawksbills were found in the middle east and northeastern Australia. Commercial exploitation to meet the demand for the hawksbill’s shell which commands as much as $225/kg, remains a major obstacle to hawksbill protection. Hawksbill “leather” is also sold as well as its oil which is used for some perfume and cosmetics. Japan imported about 20 metric tons of hawksbill shell per year from approximately 19,000 turtles until a settlement was negotiated on this trade in 1992.