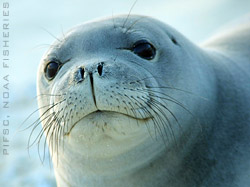 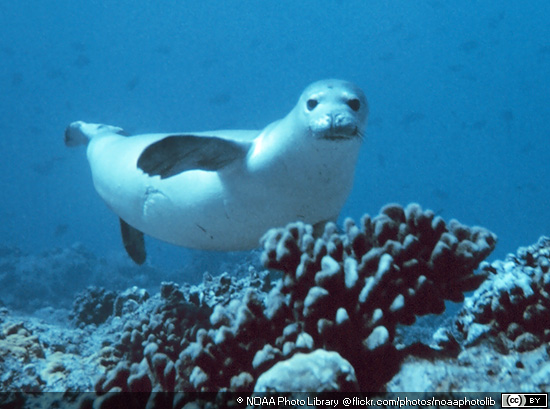 In Hawaii, Hawaiian monk seals, Monachus schauinslandi (Matschie, 1905), are called “Ilio holo I ka uaua”, which means “the dog that goes in rough water.” Their common name is from the excess folds of skin around the seal’s neck causing them to look like they’re wearing a monk’s robe, and for the fact that this is a solitary species usually found alone or in very small groups. Adults reach an average 2 m in length of and weigh between 180-270 kg. Unlike many other seal species, female Hawaiian monk seals are usually slightly larger than the males. Adult coats are light gray to brown in color with lighter coloring on the chest. The maximum age for this species is 25-30 years, however few seals live that long.

Hawaiian monk seals, Monachus schauinslandi, feed on fish such as eels and flatfish, as well as octopus, and lobster. They are often found feeding on the slopes of coral reefs at depths of up to 75-90 m for an average of 20 minutes. The maximum dive recorded for a Hawaiian monk seal is 500 m.

Hawaiian monk seals have a slow reproductive rate compared to other seal species. Females do not give birth until between 5-10 years of age. Breeding season lasts from February to July on breeding grounds near protected beaches with very shallow water next to the shoreline. Newborn pups measure about 1 m in length and weigh about 11-15 kg. They’re born with a black coat which is molted 5-6 weeks after birth and replaced by the adult coat of light gray-brown. Mothers nurse their pups for 5-6 weeks after birth, during which time they do not feed usually losing an average of 90 kg. Females have been known to adopt pups and sometimes nurse pups exchanged between mothers. After weaning, the mother leaves to feed and the pup lives off its reserves until it is ready to leave the breeding site and learn to hunt.

The mating ritual of Hawaiian monk seals is rarely witnessed because it takes place at sea. Adult males have been seen “mobbing”, an aggressive behavior where one or more males attempt to mate with immature seals of both sexes, often injuring or killing them. This behavior is likely due to the disparity between the number of males to females in Hawaiian monk seal populations as it seems to occur where there are more males than females.

The Hawaiian monk seal was heavily hunted commercially in the 1800s and populations declined significantly. Numbers recovered to some extent in the early 1900s, but according to beach counts, declined again at the western end of the species’ range by about 40% between the 1950-1980s. This species declined even more sharply between the 1980-1990s in the French Frigate Shoals colony during a period of high juvenile mortality when the survival rate of monk seal pups under 1 year dropped from 80-90% to 15%. This may have been caused by military and coastguard activities near breeding grounds resulting in their abandonment and therefore abandonment of pups by their mothers. Hawaiian monk seals are sensitive to disturbance. Fortunately, this problem has been eliminated.

The delay in the onset of reproduction in females and slow reproductive rate of this species prevents its recovery. Females at French Frigate Shoals appear to begin reproducing even later than colonies at Laysan Island. In 1998, however, the pup survival rose to over 50% again, but unfortunately this population now consists primarily of post-reproductive age adults. Also in 1998, the Chief of Protected Species Investigations at the National Marine Fisheries Service (NMFS)’s Hawaii branch stated that any further decline in Hawaiian monk seal numbers “could very seriously compromise” the survival of the species. The National Marine Fisheries Service (NMFS) is working “diligently” through its Hawaiian Monk Seal Recovery Team.

One strategy that has been used since 1984 is the capture, rehabilitation, and relocations of underweight pups from French Frigate Shoals to Kure Atoll to rebuild colonies there. Unfortunately, relocations to Midway Atoll were unsuccessful as many pups died or disappeared. The NMFS changed procedures, but 12 pups relocated to Midway Atoll in 1995 developed eye problems resulting in blindness and these seals are now being held in permanent captivity. Furthermore, relocations in 1998 were postponed when studies revealed the possible presence of antibodies to morbillivirus in seals tested at French Frigate Shoals. Fortunately, the virus has not been found in that population, however relocations are still suspended due to the high pup mortality rate. A trial “headstart” program was undertaken at Kure Atoll in the 1980s to monitor weaned pups in a special enclosure to increase their first-year survival prospects, which was reported as successful.

At French Frigate Shoals, undernourished pups and smaller nursing females is evidence that the availability of prey may have declined. It is thought that lobsters are a primary prey for juvenile and female Hawaiian monk seals at French Frigate Shoals, therefore there is concern commercial lobster fishing in the Northwestern Hawaiian Islands that began in the 1980s may be negatively impacting recovery of this population. To address this issue, the NMFS banned commercial lobster fishing in Hawaiian waters for the year 2000, and later in the year the U.S. Federal District Court issued an injunction extending the ban until an Environmental Impact Statement and analysis of the fishery’s impact on the Hawaiian monk seal population under the Endangered Species Act. In Addition, the Marine Mammal Commission requested that lobster fishing remain prohibited near French Frigate Shoals and other major monk seal colonies until there is sufficient data on the reduction of prey caused by lobster fishing including lobsters as well as bycatch of octopuses, crabs, and small reef fish.

Long-line fishing for swordfish also presented problems for this species in 1990 when several seals were found with longline hooks embedded in their mouths and skin. This issue was successfully addressed by the establishment of a protected species management zone around the Northwestern Hawaiian Islands banning pelagic longline fishing within 50 nautical miles of the islands. Similarly, a demersal shark longline fishery that was recently opened in the islands has now closed down and the Western Pacific Regional Fishery Management Council is moving to ban demersal longlining permanently in the zone and in certain areas around the main Hawaiian Islands. The Marine Mammal Commission has recommended that all future fisheries within the protected species management zone be assessed for their potential impact on monk seals before they are allowed fish in those waters.

Further conflict between the fishing industry and the recovery of Hawaiian monk seals arose because of fishing vessels running aground and consequently polluting reefs near Monk seal habitat. In 1999, a 29 m longliner grounded off the coast of Kauai released 4,200 liters of diesel fuel, 1,000 hooked monofilament fishing lines, and various other debris into the ocean. Additional problems in monk seal habitats include the harvesting of coral, entrapment hazards caused by the degrading sea wall at Tern Island in the French Frigate Shoals, pollution from fisheries, and disturbance caused by eco-tourism activities at Midway Atoll and recreational fisheries around the islands. Fortunately, in January 2001 the Northwest Hawaiian Islands Coral Reef Ecosystem Reserve was established covering 339,260 square kilometres (34 million hectares) along a 1,930 km chain of Hawaiian islands. Under the terms of the reserve, oil, gas and mineral production and exploration is banned, commercial and recreational fishing is capped at pre-reserve levels, the removal of coral is banned, and dumping is prohibited. In addition, stricter regulations apply in 15 special areas within the reserve.

Like many other seal species, Hawaiian monk seals suffer from entanglement in marine debris, particularly juveniles, causing injury and death. In 1999, 25 entangled seals were found during field visits to Hawaiian monk seal breeding sites. A survey conducted at French Frigate Shoals in 1996-1997 found an estimated that 29,000 net fragments, mostly from trawl nets, less than 10 m deep. Ongoing efforts are underway to clean up the reefs and in 1998, a cooperative federal-state-private cleanup operation discarded 7.5 tons of discarded fishing nets from 1.5 square kilometers of coral reef near French Frigate Shoals. A similar cleanup in 1999 at Lisianski Island and Pearl and Hermes Reef discarded nearly 23 tons of discarded fishing nets.

The viability of this species is also threatened by its unusual behavior of “mobbing.” Since 1982 at least 66 seals have died or disappeared after being mobbed. Two adult males that had been particularly aggressive towards pups at French Frigate Shoals were captured and relocated in 1998.

The natural predators of Hawaiian monk seals may also prevent their recovery, and increasing predation by Galapagos sharks has been observed, likely due to declining fish stocks. Pups are particularly vulnerable; it is estimated that up to 27% of the pups born at French Frigate Shoals in 1999 may have died due to shark predation. The lack of genetic diversity caused by the decline in population numbers may also compromise the future survival of the species. Another threatening factor is pollution. In 1978, a mass mortality of monk seals at Laysan island was attributed to biotoxin poisoning.

The Hawaiian monk seal is listed as Endangered under the U.S. Endangered Species Act and as Depleted under the U.S. Marine Mammal Protection Act. The species is also listed as Critically Endangered A3ce+4ce on the IUCN Red List and as an Appendix I species under CITES. The seals’ breeding areas in the Northwest Hawaiian Islands are covered by either the Hawaiian Islands National Wildlife Refuge, the Midway Atoll National Wildlife Refuge or the State of Hawaii Seabird Sanctuary at Kure Atoll. Access to all of these protected areas requires permits. The conservation, assessment and recovery of the Hawaiian monk seal is the responsibility of the U.S. National Marine Fisheries Service (NMFS)’s Honolulu Laboratory.