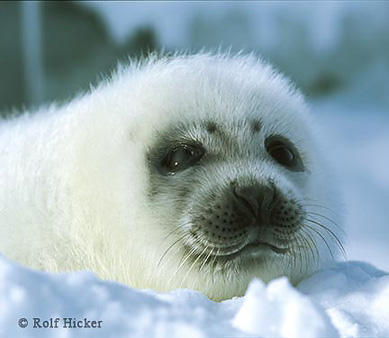 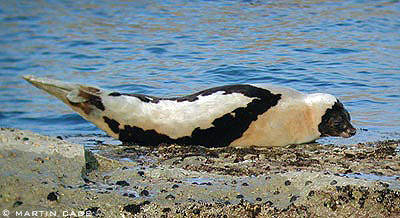 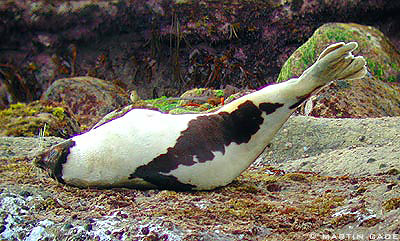 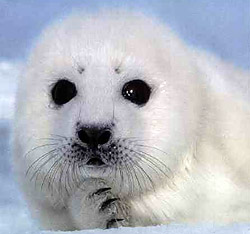 Harp seals, Pagophilus groenlandicus (Erxleben, 1777), aka Phoca groenlandica, get their common name from the harp-shaped pattern on the dorsal (upper) side and flanks of adult harp seals. These patterns are more distinct on the bodies of adult males. The Latin name translates to “ice-loving seal of Greenland.” Adult males and females are similar in size measuring about 1.5-2 m in length and weighing an average of 130 kg. The life span for harp seals is about 30-35 years.

Harp seals are a highly migratory species, and have been known to travel distances up to 2,500 km. They are also a very gregarious species gathering together to molt after the breeding season, which takes place on the pack ice from February-March. After molting, the seals disperse widely to feed during the warmer months. Seals from the northwest Atlantic population travel to Baffin Island and southwest Greenland in early summer, then travel to Ellesmere Island in the high Arctic, some reaching as far as Hudson Bay, by late summer. Those breeding near east Greenland have been found feeding in northern Iceland and northern Norway. In late September the populations begin a southward migration toward the winter breeding grounds. Some juveniles and non-breeding adults stay in the north year round. There is no evidence of interbreeding among the different populations, but studies have shown juveniles may move between them.

Harp seals have a varied diet of fish such as capelin, polar and Arctic cod, herring, sculpin, Greenland halibut, redfish, and plaice. They also consume crustaceans such as amphipods, euphausids (krill), and decapods (shrimps and prawns). Harp seals routinely dive to depths of 100 m while feeding, however one individual was observed diving to a depth of 274 m.

Males and females reach sexual maturity between 4-6 years. This gregarious species gather together during the breeding season to form dense breeding grounds that contain up to 2,000 seals per sq km. Male courting rituals include calling, blowing bubbles, making pawing gestures, and chasing females on the ice. Pups are born from late February-April, measuring 80-85 cm in length and weighing 10-11 kg. Their fur is yellow when they are born, hence the name “yellowcoats” for baby seals. The yellow coat turns white withing a few days, and 2.5 weeks later, the pup begins to molt the white fur which is replaced by a silvery-gray coat with irregular dark spots. Molting pups have tufts of white fur called a “ragged-jacket”. When the white fur has been completely shed at around 4 weeks of age, the seal is called a “beater”. About 14 months later, juvenile coats have larger spots and the young seal is then called a “bedlamer.” This spotted coat pattern is kept until sexual maturity when the harp pattern begins to form, and in males, the head turns black in color. Seals that do not develop the full harp shape are known as “spotted Harps”. The mortality rate for harp seal pups in their first year is 20-30%.

Females nurse for about 12 days during which time the pups will gain between 30-45 kg. After her pup is weaned, the female mates with one or more males, usually in the water. She then begins an intense feeding period before molting. Males remain at the breeding patch as long as possible to mate before leaving to molt. The pup starts to swim and feed itself at about 4 weeks.

Harp seals gather to molt from April-May eating very little during this time.

Canadian Hunt
All three harp seal populations are commercially hunted for oil and fur. They are most often hunted on their breeding grounds. Considering the large concentrations of harp seals during breeding season, the hunt in Canada has been described as the largest slaughter of marine mammals in the world. The size of the harp seal hunt in Canada was aided by government subsidies in the 1990s and increased significantly during this time. Since 1997, the Total Allowable Catch (TAC) for harp seals in Canada is limited to 275,000, and the reported total killed in 1999 was 244,552. In 2000, only 91,602 harp seals were killed, in spite of the extended hunting season that year. This reduction was attributed to low demand for pelts, high fuel and ammunition prices, and increased insurance rates. In addition, access to harp seal breeding grounds was difficult in 2000 because of an early Spring that melted the ice. It is believed that the number of harp seals killed each year is underreported by an estimated 38-89%.

In Greenland, harp seal hunting is unregulated. Combined with the number of seals killed as fishery bycatch, estimates of around 465,000 harp seals in the northwest Atlantic population were killed each year from 1997-1999. These figures exceed the birth rate and therefore there are concerns that harp seal populations are declining. Harp seals are killed at the same rate as they were between 1950-1970 when the northwest Atlantic harp seal population declined by as much as 50%.

Juvenile “whitecoats” were often killed for their fur in Canada and in the Arctic, however public outcry in 1983 influenced the European Economic Community to ban the import of whitecoat products, and in Canada, commercial hunting of whitecoats has been banned since 1987.

Unfortunately, it appears that Canadian sealers are searching for new markets in Canada and internationally, and hope to persuade the United States and the European Union to lift trade barriers on seal products. Not only is harp seal oil marketed, male harp seal genitals are exported to Asia as “aphrodisiacs”. Seal leather, fur, and meat products are also produced and sold. However, there were no government subsidies for seal meat in 2000, and the seal industry admitted before the 2000 hunt began that the demand for both seal meat and seal pelts was down. In 2001, it was official government trade statistics revealed that only 51% of Canada’s 2 million pelts from harp and hooded seals killed between 1982-1999 were sold, further demonstrating the low demand for seal pelts.

Conservation groups have been very active in Canada defending the need to protect seals. They have documented inhumane activities such as seals being skinned, cut open, and dragged with hooks while still alive, clubbed and left to suffer for long periods before being killed. Video footage has been taken of a Canadian Coast Guard ice-breaker ramming seals while clearing the ice to give the sealers better access to the ice floes. Sealers have been prosecuted for such behavior, however, an ongoing battle between the sealing industry and conservationist photographers is ongoing, and sealers have requested that photographers be banned from recording the hunt altogether.

In Norway, killing of suckling pups is regulated, nevertheless, killing of newborn seals still suckling after the regulatory cut-off date were still legally killed. Another inhuman treatment in Norway has been documented when seals targeted to be shot from the boat to then be killed by a hakapik escaped injured into the water before death.

Like Canada, the Norwegian sealing industry depends on government subsidy, and the market for seal products is poor. The sealing industry is fledgling with fewer experienced sealers and a poor international market. Pelts are the primary reason for seal hunts in Norway. The market for meat is small and limited to the city of Tromsø.

In Russia, the seal hunt is also government-subsidized. Here, the white pelts of baby seals are dyed black and sold as hats for which there is little demand. In spite of the European Union ban on the import of harp seal whitecoat products, there are reports that they are being imported from Russia illegally. The number of pups killed by Russian sealers in 1999 was 34,850, all whitecoats. The quotas for whitecoat pups in 2000 was 63,500, and in 2001 76,000.

There have been reports that many whitecoats in Russia are not properly killed and are transported while injured to processing areas. In January 2000, a bill to ban seal hunting was passed by Russian parliament 273 votes to 1, however it was vetoed by President Vladimir Putin.

Harp seals, like many other seal species, are blamed by the fishing industry for declining fish stocks, such as cod, particularly in the northwest Atlantic. Subsequent analysis has shown that the decline in fish stocks is more likely caused by over-fishing and discarding juvenile cod as bycatch. In spite of this evidence, Canadian fishing interests and provincial government ministers in Newfoundland are calling for a massive cull of several million harp seals. Additional research has shown that the harp seal diet consists of over 120 species of fish and invertebrates, and therefore such a massive reduction in harp seal populations would have a negative impact on the marine food web, and therefore, on commercially fished species.

Somewhat ironically, over-fishing will likely reduce harp seal populations naturally as food sources decline. Evidence exists that harp seal populations in the Arctic and Barents Sea declined when the number of capelin declined in the Barents Sea. As a result, harp seals migrated into Norwegian coastal waters and approximately 80,000 of these seals died in Norwegian gillnet fisheries exceeding the usual bycatch rate of 500-2,000.

Like harbor and gray seals, increased sightings of harp seals were reported in 2001 along the eastern seaboard of the United States, including a large number in need of rescue. The cause of this increase is unknown, but may be attributed to changing distribution or availability of harp seal prey, increased seal populations resulting in greater competition for food, and increased commercial fishing in the north forcing seals south to look for food.

Harp seal populations, particularly those feeding in the St. Lawrence River estuary, are at-risk of environmental contamination. Additionally, the ice in the Gulf of St. Lawrence has been breaking up and melting earlier each year due to warmer winters, which may be attributed to global warming, has resulted in increased mortality of harp seal pups born on the ice. Inadequate ice floes result in decreased birthing grounds, and pups can drown or be crushed by the breaking ice.

The harp seal is listed as an Appendix III species under the Bern Convention.