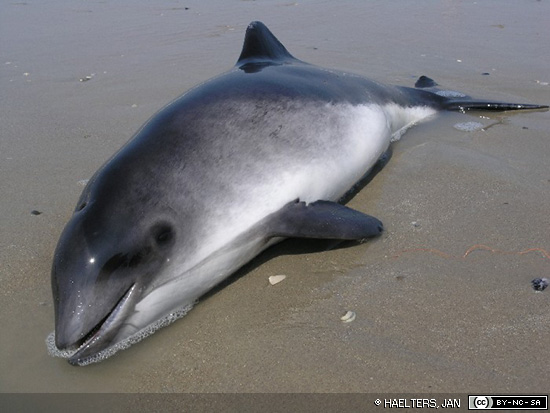 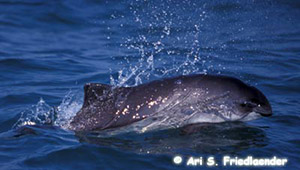 Harbor porpoises, Phocoena phocoena (Linnaeus, 1758), aka common porpoise, are small cetaceans with a rotund, stocky body that tapers toward the tailstock. This porpoise reaches a maximum length of 1.9 m and maximum weight of 90 kg. On average, harbor porpoises are smaller, and do not exceed 1.5 m or weigh more than 60 kg. The females are slightly larger than the males. This porpoise has no beak, but a blunt, rounded snout is present. There are 22-28 small, spade-shaped teeth on each side of the upper jaw and 22-26 on each side of the lower jaw.

Harbor porpoises are dark gray or dark brown on their dorsal (upper) sides, lighter gray on their flanks, and white on their ventral (under) sides. Their flippers are also dark in color with a dark stripe that extends to their eyes. Their flippers are small, oval, and rounded at their tips. Their low, wide dorsal fin is triangular in shape and located slightly behind the center of their body. In some individuals, small nodules are found on the leading edge of their dorsal fin. Their flukes (tail fins) are small and curved, and have a median notch.

There are three subspecies known for the harbor porpoise, Phocoena phocoena:

P. phocoena of the Baltic Sea and P. phocoena (vomerina) of the W North Pacific are noted as key populations.

Harbor porpoises are found singly, in pairs, or in small groups of 6-10 animals, however larger groups between 50-100 animals have been observed feeding. Harbor porpoises are often found stranded, which is likely due to their preferred shoreline habitat. Although some live stranded porpoises have been taken to aquariums, few survived in captivity.

This porpoise is a non-gregarious species that shies away from boats. They are often detected by the loud puffing sound they make as they surface to breathe.

Harbor porpoises, Phocoena phocoena, are found in shallow, coastal waters of the North Atlantic, North Pacific, and Black Sea in temperate and subarctic waters of less than 15°C. They sometimes also swim into bays and large rivers.

Harbor porpoises, Phocoena phocoena, feed on fishes such as cod, herring, pollock, sardines, and whiting, and on squid. These porpoises consume about 10% of their body weight each day.

Harbor porpoises, Phocoena phocoena, reach sexual maturity at 3-4 years. Calves are born 70-90 cm in length 6.4-10 kg in weight following a gestation period (pregnancy) of about 11 months. Females give birth about every 2 years, and nurse for about 8 months.

Because of their near shore habitat, harbor porpoises have been widely hunted by humans for their oil and meat. Although they are still abundant throughout their range, populations have declined. They are at-risk of entanglement in salmon and cod nets in the eastern North Atlantic; and in trawl and gill nets in the Pacific. In the Baltic and Black seas, populations have declined due to drive fisheries. These porpoises are also at-risk of pollution from pesticides, destruction of habitat by coastal development, and marine traffic.