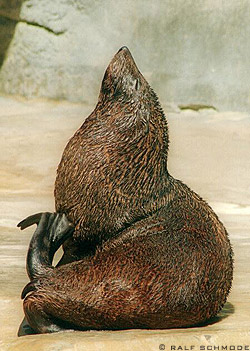 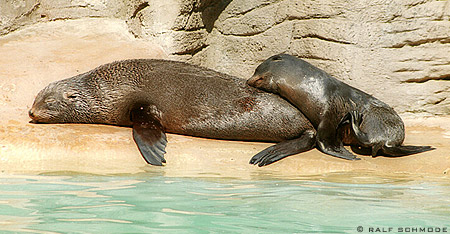 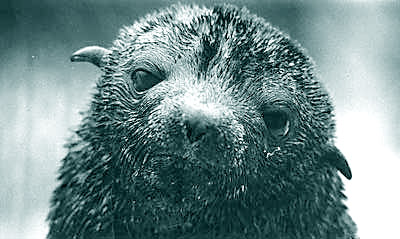 Guadalupe fur seals, Arctocephalus townsendi (Merriam, 1897), whose Latin name means “bear headed” are an extremely dimorphic species, which means that males are significantly larger than females. Adult males measure 2.2 m in length on average and weigh 188 kg, while the average adult female reaches 1.5 m in length and 49 kg in weight. Females live almost twice as long as males, on average about 23 years compared to the male average life span of 13 years. The Guadalupe fur seal has a dark brown-black coat with light hairs on the back of the neck.

The Guadalupe fur seal feeds on squid and fish. Research on a group of adult females showed them feeding south of Isla de Guadalupe, making round trips of 704-4,092 km. They feed at night, diving to an average depth of 17 m, for an average of about 2.5 minutes. The primary predators of Guadalupe fur seals are sharks.

Very little data exists for the Guadalupe fur seal, partly because of its geographical isolation. The Guadalupe fur seal breeds on the Isla de Guadalupe and Isla Benito del Este off the coast of Baja California, Mexico on rocky beaches or in caves. Breeding season is from June to August. Adult males fight for territories containing an average of 4 females, although they have been known to breed with as many as 12 females in a single territory. Females give birth to a pup within a few days of their arrival, then mate 7-8 days later. After mating, she returns to feed at sea for 9-13 days after which she will return to nurse her pup for 5-6 days. This feeding cycle lasts 8-9 months, which is long compared to other fur seal species.

Guadalupe fur seals, Arctocephalus townsendi, were nearly extinct in the late 1700s and early 1800s due to commercial hunting. By 1825, they were nonexistent in California waters, but were hunted in Mexico until 1894. By 1928, the species was considered extinct but the species was rediscovered in 1954. Isla de Guadalupe is now a pinniped sanctuary, and the Guadalupe fur seal is fully protected by the government of Mexico. The species is also protected in the U.S. by California, as a Threatened species under the U.S. Endangered Species Act, and as a Depleted and Strategic species under the U.S. Marine Mammal Protection Act. The species is listed as Least Concern on the IUCN Red List and as an Appendix I species under CITES.

Individuals, particularly juvenile females, have been found stranded with injuries caused by entanglement in marine debris. Although little data exists, it is thought that Guadalupe fur seals may be killed by entanglement in drift and set gillnets. El Niño and Hurricane “Darby” caused a 33% pup mortality in 1992.