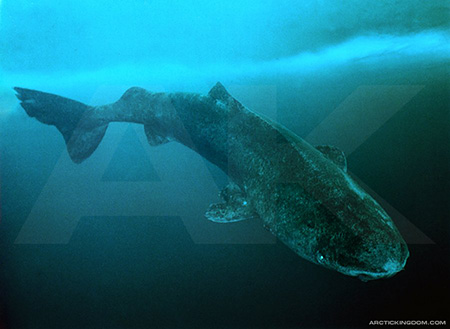 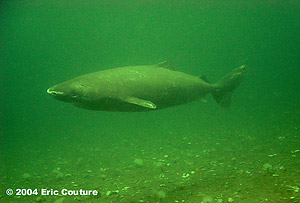 Greenland sharks, Somniosus microcephalus (Bloch and Schneider, 1801), aka sleeper sharks, are named for their lethargic behavior; Somniosus, which refers to “sleep”, and microcephalus which means “small head.” In spite of their small heads, Greenland sharks are large, robust sharks that reach up to 6.5 m in length and weigh up to 900 kg. They have short, rounded snouts, small eyes, and small but sharp teeth. Their dorsal and pectoral fins are also quite small, as are their gill slits in relation to their body size. They are brown, gray, or black in color, and some may have dark lines or white spots on their dorsal (upper) sides or along their flanks.


Greenland sharks, Somniosus microcephalus, are found between 80°N-55°S in the northern Atlantic and Arctic regions, although sightings have been reported south near France and Portugal, as far west as the Gulf of St. Lawrence, and as far south as off Cape Cod and North Carolina. Sightings have also been reported in the Southern Atlantic near Argentina and even in Antarctic waters. Greenland sharks are a deep-water species that inhabits cold waters between 1-12°C, near the continental and insular (island) shelves and upper slopes down to at least 1,200 m. In the Arctic and subarctic Atlantic, however, Greenland sharks can be found during the colder months inshore in intertidal areas and even at the surface of shallow bays and river mouths.

Greenland sharks are preyed upon by sperm whales and possibly orca.

Greenland sharks, Somniosus microcephalus, are an ovoviviparous species. Pups measure about 38 cm at birth and litter size is between 5-10 young.

Greenland sharks are hunted commercially and recreationally. Their meat is dried and sold for human and dog consumption. In its fresh form, their flesh is said to be toxic when eaten because the flesh contains high concentrations of urea and trimethylamine oxide, which induces a intoxicating affect (see Eating Rotten Shark Meat for more information).