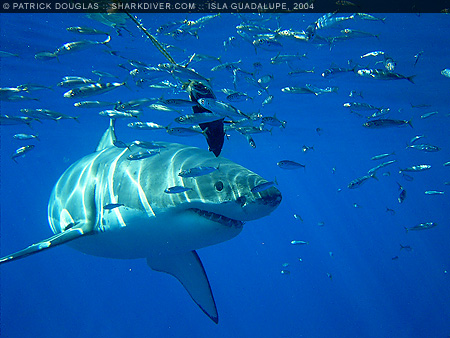 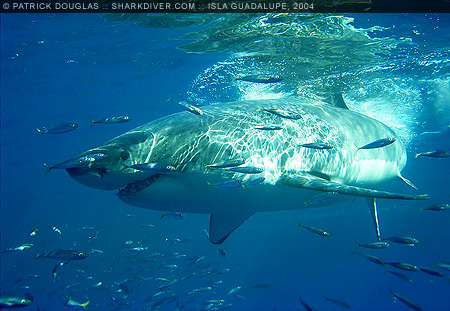 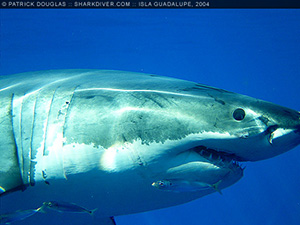 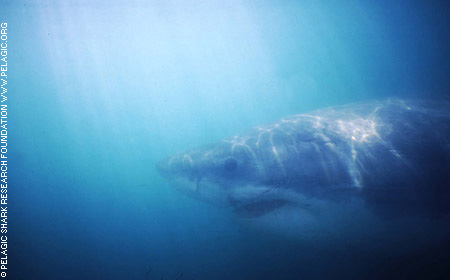 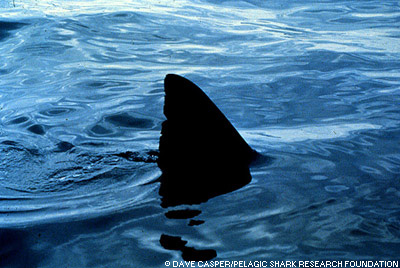 Great white sharks, Carcharodon carcharias (Linnaeus, 1758), aka white sharks, white pointers, blue pointers, man-eaters, manila sharks, have, according to E. O. Wilson “…rightfully been called a top carnivore, a killing machine, the last free predator of man—the most frightening animal on earth.” This common perception of white sharks is changing though as we learn more about these increasingly threatened sharks, some courageous explorers have not only free-dived with these “killing-machines,” they lived to talk about it. Not that free-diving with white sharks is recommended, but these bold experiments have shown that these majestic, yet intimidating, creatures are actually not predators of man.

Great white sharks, Carcharodon carcharias, are the largest known predatory fish in the sea. They reach lengths of over 6.4 m and can weigh up to 2,268 kg. They have a conical snout, pitch black eyes, a heavy, torpedo-shaped body, and a crescent-shaped, nearly equal-lobed tail fin that is supported on each side by a keel. The great white swims in a stiff-bodied, tuna-like fashion, unlike the sinuous whole-bodied swimming stroke of most sharks.

The name “white shark” is thought to have come from its universal all-white belly. The dorsal coloring of great white sharks, however, ranges from pale to dark gray and can vary tremendously depending on lighting and water color and visibility.

The great white’s average length is around 3.6 m, but there have been reports of sharks as large as 7.62 m. The great white belongs to the Family Lamnidae (the mackerel sharks), which includes mako and salmon sharks. Along the California coastline, adult great whites are an important predator of marine mammals, particularly the calorie-rich elephant seals. Juveniles feed mostly on fish and add marine mammals to their diet when they reach about 450 kg.

White sharks are able to prey on such large creatures with their large upper teeth, which are triangular in shape and sharply serrated to cut large pieces of flesh from prey. The bottom teeth are narrower and used to hold prey. An unusual characteristic the white sharks (shared by other mackerel sharks and thresher sharks, Family Alopiiidae) is the ability to maintain parts of their body (swimming muscles, stomach, and brain) at temperatures above that of the surrounding water, which classifies them as endothermic or warm-blooded, like mammals.

Great white sharks, Carcharodon carcharias, have one of the widest geographic ranges of any marine animal. They are found in all cold temperate and tropical waters, from 60°N latitude to 60°S latitude. They were long thought to be primarily coastal inhabitants; however, from recent satellite tracking studies we now know that they migrate long distances, sometimes crossing entire ocean basins. Along the central California coast, they can be found hunting near elephant seal haulout areas from October through March. Off the western cape of South Africa, they can be found near cape fur seal haul-outs from May to September. In North American waters, white sharks have been reported from Newfoundland to Florida, and from the Aleutian Islands, Alaska to southern Mexico. Nowhere in its range is the white shark very common, and in fact, they are becoming increasingly rare. They have been documented to depths  of 1,200 m.

Recent research on interactions between great whites and various species of seals and sea lions suggests that great whites hunt their prey visually. Using their dark dorsal colors to help them blend in while cruising near rocky bottoms, they watch for unsuspecting seals on the surface above. When an animal is sighted, they accelerate quickly to the surface and ram into their prey, simultaneously stunning it and taking a large bite. They then return to feed on the carcass. 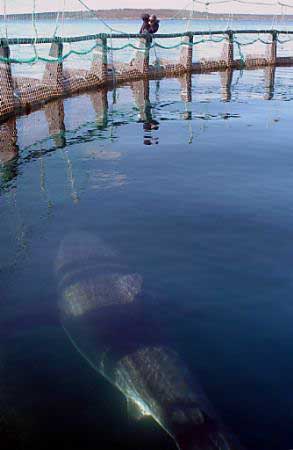 This white shark mysteriously appeared inside the above fish pen and it is thought that it either bit
through the netting, or leapt the 2.3 m surrounding electrified fence while chasing a seal. (Reuters – Handout)

It should be noted that great whites often receive considerable injuries from their prey, many have been observed with deep scarring on the head from the teeth and claws of elephant seals and sea lions. It is still undetermined whether great whites are territorial; however, current observations indicate they seem to possess a home range. Recent research has shown that great whites exhibit complex social behavior that establishes rank among individuals. After one great white makes a kill, others sometimes come and feed off the same kill with no apparent aggressive interactions.

Very little is known about the reproductive cycle of the great white shark. Development is ovoviviparous. The smallest known free swimming white shark measured 1.1 m and weighed about 16 kg.

Along the west coast of North America, it is believed that great whites give birth to their live young in the warmer southern California waters. The young may then slowly migrate northward as they grow larger.

Ovoviviparous: eggs are retained within the body of the female in a brood chamber where the embryo develops, receiving nourishment from a yolk sac. This is the method of reproduction for the “live-bearing” fishes where pups hatch from egg capsules inside the mother’s uterus and are born soon afterward. Also known as aplacental viviparity.

Gestation period is unknown, but may be longer than a year, after which mother great whites may take a year “off” before becoming pregnant again. Litter size ranges from 2 to 10 (possibly to 17) pups, each 1.0-1.5 m long at birth. Male great whites mature at 3.5-4.1 m in length and 9 to 10 years of age; females mature at 4-5 m and 14 to 16 years. Great whites’ lifespans are believed to be more than 30 years.

Although great whites, Carcharodon carcharias, have little commercial value, fishing for these sharks became a popular sport with big game fish anglers. The fearsome reputation of the great white has given it almost legendary status as an apex predator and they are often killed by humans for sport and for their jaws, teeth and fins.

Great whites are very curious and most so-called “attacks” appear to be motivated by curiosity rather than a desire to feed and most attacks on humans are not fatal. Ironically, the great white is far more threatened by humans than we are of them.

Great white sharks, Carcharodon carcharias, are now listed as Vulnerable (VU A2bd) on the IUCN Red List of Threatened Species due to:

“Despite the high profile media attention the Great White Shark (Carcharodon carcharias) receives, relatively little is known about its biology. It appears to be fairly uncommon compared to other widely distributed species, being most frequently reported from South Africa, Australia, California and the northeast United States. World catches of Great White Sharks from all causes are difficult to estimate, though it is known to have a relatively low intrinsic rebound potential (Smith et al. 1998). Threats to the species include targeted commercial and sports fisheries for jaws, fins, game records and for aquarium display; protective beach meshing; media-fanned campaigns to kill Great White Sharks after a biting incident occurs; and degradation of inshore habitats used as pupping and nursery grounds.”

Because of the importance of this species as a key predator in marine ecosystems, the great white was granted protected status in 1991 in South Africa and in 1994 in California and Australia and is listed on CITES Appendix II. Great white sharks are also an important species for marine ecotourism, observed by divers from the safety of cages in South Africa, southern Australia and Isla Guadalupe, Mexico.